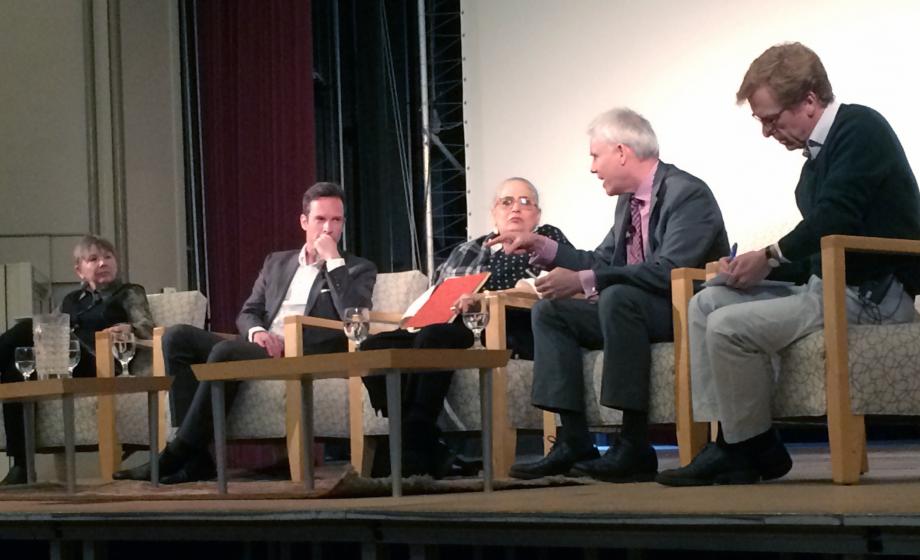 The stakes are high. The planet is changing profoundly. What does it mean, what is possible, and what is needed?

Clark University’s second Climate Change Teach-In on March 23 brought the campus together for a deep consideration of the challenges to the planet’s health. The day featured a variety of teach-in sessions and a campus-wide council session. In all, more than 50 faculty and staff offered panels, presentations and open classes, assisted by a team of student facilitators. The event examined the issues from multiple perspectives, inspiring discussions into the ways climate change is altering nature, how it affects the world’s populations and their economic, social and cultural structures, everything from capitalism to the arts.

Convened by A new Earth conversation and led by Sarah Buie, professor in Visual and Performing Arts and senior associate/past director, Higgins school of Humanities, Ellen Foley, associate professor of International Development and Social Change, and Amy Richter, associate professor of history, the teach-in was framed by three essential questions: What is changing, and why? How do we choose to respond? and What’s next?

The teach-in was launched on Feb. 26 with a lecture by activist and author Naomi Klein, who urged a bold approach on climate change. A follow-up on Klein’s talk was the focus of the March 23 keynote panel moderated by Tony Bebbington, director of the Graduate School of Geography. The conversation included panelists President David Angel, IDCE Director Ed Carr, geography Professor Jody Emel, and sociology Professor Parminder Bhachu. The panel explored the questions raised by Klein’s admonitions about climate change action, including creation of the Leap Manifesto, and engaged with audience members in Atwood Hall.

Bebbington recalled the Klein lecture and outlined some basic tenets of the Leap Manifesto, Canadian in origin, which Klein endorsed.

“We have an unusual conversation under way here at Clark. With broad-ranging faculty expertise and concern, and resources in faculty governance and dialogue, we’re in a position to contribute to how higher ed shows up in these times, and to consider new possibilities.” — Professor Sarah Buie

President Angel spoke of the mandate to eliminate the University’s carbon footprint and the dilemma faced by “pressure to put reducing greenhouse gas above all else.” The University is not “trading off,” he assured, adding that he recognizes a paradigm shift, “a framing that allows us to bring these things together and not force us to choose.”

Bhachu discussed “climate refugees” and issues of displacement, dislocation and disruption created by loss of land and ecosystems due to climate change. “What can we learn from indigenous migrants?” she asked.

Carr delved into agrarian contexts, recalling his research in Ghana at a time when the monsoons did not arrive, yet the “people’s livelihoods were built for that outcome and they got through it.” He took issue with the Leap Manifesto’s relatively urgent “This Changes Everything” message, saying, “I reflexively distrust crisis narratives.” He argued that incrementalism should not be rejected outright, posing that if even five or six of the biggest contributors to CO2 emissions took bold action to reduce, that could go far toward easing climate warming. The Manifesto, he said, uses a “catastrophist framing” that can tend to discount the resilience of indigenous populations.

Emel pointed to the role meat plays in climate warming, a subject of her latest book, “The Political Ecologies of Meat.” She expressed her support of the Leap Manifesto, listing specific actions she supports. Strong leadership and bold, collective action is necessary and effective, she added, nodding to several meaningful “green” efforts under way in local communities.

Extractivist thinking and austerity “have become a fossilized way of thinking that may threaten life on Earth,” Emel said. Starting over is not the required starting place, she added. “We’re not starting over with a big rock that we have to push up the hill all by ourselves,” but we need to and are beginning to “show up and support other actions.”

Bebbington summed up three themes or concerns made apparent during the keynote: There are many ways of knowing “what is changing and why,” presenting a pressing need to envision the transformation of human lives in relation to climate change. In addressing how change happens, the authoritarian/vertical model is imperfect, sometimes misguided and not sustainable. Finally, “place matters.” “One can’t escape from the place that we’re in. … our challenge here is to envisage what those places will look like.”

In the afternoon, many participants and members of the campus community joined in “A Pause for the Planet” in Red Square, and, from there, in groups met with facilitators in a Campus-wide Council session held at multiple locations.

“We have an unusual conversation under way here at Clark,” said Buie. “With broad-ranging faculty expertise and concern, and resources in faculty governance and dialogue, we’re in a position to contribute to how higher ed shows up in these times, and to consider new possibilities.”