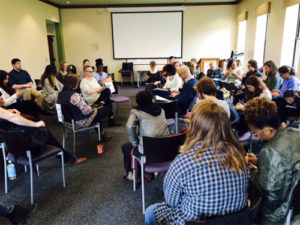 Session Two of the March 23 Climate Change Teach-in at Clark University was organized around the question, How do we choose to respond?  The session comprised nine conversation groups or panels.

One panel, Making Black Lives Matter on Earth, examined racial justice and environmental movements, revealing connections and disconnections between them.

More than 50 attendees filled concentric seating, facing panelists and each other in the Grace Conference Room.

History proves that the effects of climate change have had a “disproportionate impact on communities of color,” said Sisson. She discussed how climate-change activism sometimes   attempts to “co-opt the fervor of the civil rights movement,” becoming exclusionary as a result. She also cited the oft-ignored legacy of people of color who are or were environmental change agents and powerful activists, including as examples cultural geographer Carolyn Finney and botanist/inventor George Washington Carver.

Kabati spoke of the intersections of race and environment that lead to questions about the consequences of being born into bad environments, and how the deteriorating social contract can represent a form of state violence. “We must consider how toxic environments affect the quality of life for black people,” she said.

Foley related how her students have been reading the works of indigenous scholars who expressed frustration at categorizing the contemporary “post-colonial era” and have said, “Our colonial moment is still here!”

People of color are the global majority, Jones pointed out. “Climate change is not just about trees and waterways; it’s about people … A shift in human consciousness – that’s what we really need.” Jones also talked of the “unintentional damage” that can be done by the even well-intentioned individuals carrying “undiagnosed anti-black sentiment.” Jones urged the group to address the “Johnny Bigots” that exist within and around them. “It’s easier to look at climate justice than it is to look at racial justice.”

After a Q&A period, DeMeulenaere closed the session on the theme of hope.

Continuation of open dialogues such as this one and others before and to follow, hold promise, Sisson said, also suggesting more formalized, curricular studies on race and the environment.

Kabati said she is hopeful about progress toward racial equality in the face of climate change. “Listening is the key component—not just with the head, but with the heart.”