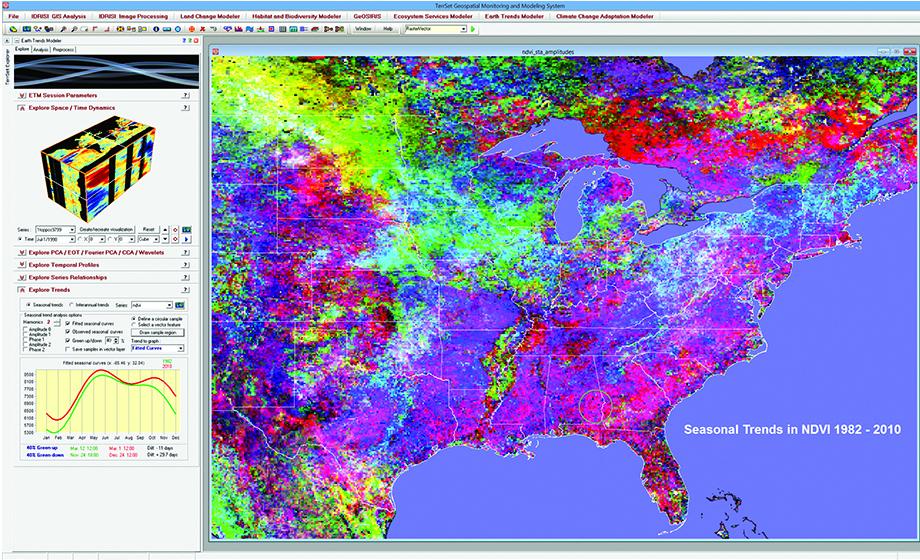 An ongoing debate in the scientific community — one that GOP presidential candidate Ted Cruz and others have used to reject human-induced climate change — involves an apparent decade-long “hiatus” in global warming.

In 2013, the United Nations’ Intergovernmental Panel on Climate Change noted a slowdown in global warming from 1998 to 2012. Then last July, researchers from the National Oceanographic and Atmospheric Administration (NOAA) released “newly corrected and updated global [sea] surface temperature data … [that] do not support the notion of a global warming ‘hiatus.’ ”

This month in Nature Climate Change, atmospheric scientists reaffirmed that the hiatus did, indeed, occur. However, they urged, “it has been imperative for scientists to provide a timely explanation of the warming slowdown, and to place it in the context of ongoing anthropogenic warming.”

In a talk titled “The Global Warming Hiatus: Evidence in the Response of Vegetation” for Clark University’s Climate Change Teach-in on March 23, J. Ronald Eastman, professor of Geography, did just that.

“The question now is: What’s going on? Is [the hiatus] really there or is it not?” asked Eastman. “What we need is an independent line of evidence, because everyone is arguing over their temperature data sets, and there are questions about how the data are prepared. And so I thought: What about looking at evidence from plants? … Because we know that temperature does has a direct effect on photosynthesis.” 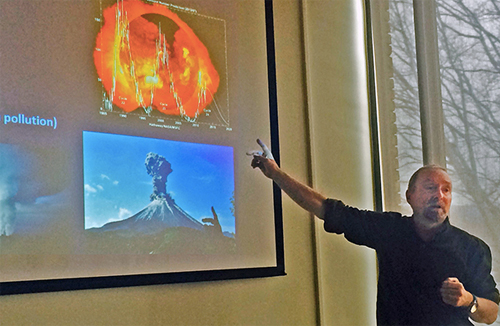 In his research and work as Director of Clark Labs, Eastman regularly employs NASA weather satellite images and data on vegetation. The NDVI (Normalized Difference Vegetation Index)data set covers 1982 to 2014, providing a wide span of time to observe the photosynthesis — also called productivity — of plants.

By comparing this set with Berkeley Earth Surface Temperature (BEST) data gathered from the largest array of climatological stations, “you can see that the relationship between anomalies in temperature and anomalies in vegetation is actually pretty strong,” he said.

Eastman showed colorful charts and maps that incorporate the vegetation and temperature data and coalesce hundreds of satellite images; he created the images using Clark Labs’ IDRISI Geographic Information System (GIS) and Image Processing software — tools that have become popular with researchers from across the world — which he developed.

The images show that the correlation between increased global temperatures and increased photosynthesis is especially strong when incorporating month-by-month data from northern Europe. Eastman used seasonal trend analysis, a method he has used many times before to capture and assess longer-term trends.

“If we use long-term trends that remove the seasonality, it is consistent with the hiatus, but it’s not as strong,” Eastman said.

“To me, the evidence supports the concept of a pause, a hiatus, a slowdown, call it what you will,” he said. “We don’t have to argue about whose data set is better; we’ve got a second piece of evidence [the data from vegetation productivity] that corroborates the presence of a slowdown in the greater global warming; some would say even a reversal.”

But what caused the slowdown? Scientists, according to Eastman, suggest these possible causes:

“In this early phase [in the mid-1990s], we had a lot of El Niños but not so many large-magnitude La Niñas, but during the hiatus, we had a number of very notable La Niñas,” Eastman said. “We tapered off on the mother of all La Niñas in 1999. It was huge.”

Like the vast majority of scientists, Eastman acknowledges human-induced climate change. But he, like the atmospheric scientists who recently reaffirmed the hiatus, is intellectually curious about the reasons behind the global cooling of the 2000s.

One thing is clear, he noted: Climate-change skeptics are quick to pounce on any evidence that natural phenomena might influence global temperature; they claim humans are not to blame. But ignoring humans’ impact on the earth could have catastrophic consequences, scientists have continuously warned.

Take changes in the solar cycles. From 1645 and 1715, astronomers observed fewer sunspots. This period was called the Maunder Minimum, named for two early 20th century astronomers.

“There are quite a number of people in the scientific community who are thinking we’re entering into a Maunder Minimum. If that happens, and if that’s what’s behind this [hiatus], it would suggest that we’re going into a time of significant cooling,” Eastman said. “What that’s going to do to the climate change debate could be disastrous because people are going to say, ‘See, the scientists were all wrong.’ And when [global warming] comes back again — because we know from history that when we go into a Maunder Minimum, we move back out of it — things are going to be much worse than we expected [due to ongoing, human-induced climate change].”