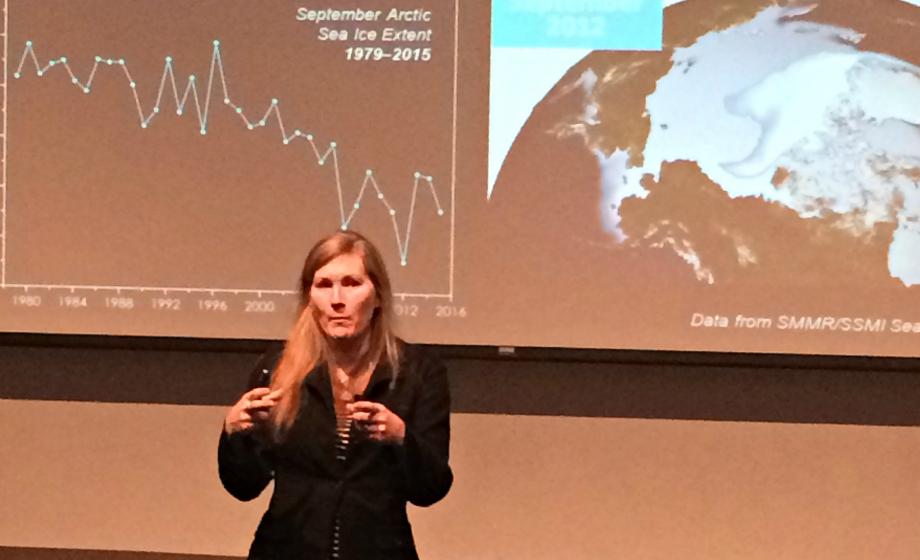 Session One of Clark’s Climate Change Teach-in 2016 on March 23 entailed several “new Earth conversations” framed by the question “What is changing, and why?” Faculty from many disciplines offered insights and perspectives on a variety of climate-change topics.

Among the teach-in faculty was Karen Frey, associate professor at the Graduate School of Geography, who presented “A new look at normal for sea ice in the Arctic” to an audience in Jefferson 320.

“The Arctic is so important in the context of global climate change,” Frey said, calling sea ice levels and melting/warming cycles “a really important thermostat” for the climate on Earth. She reminded listeners that 2015 was the warmest year on record since measurements began.

Frey talked about the work of her Polar Research Science Laboratory, sharing a glimpse of her NASA- and National Science Foundation-funded research conducted in the Bering, Beaufort and Chukchi Seas (on international scientific expeditions headquartered aboard a U.S. Coast Guard ice breaker), as well as expeditions in Siberia. She explained how melting ice and the resulting light/heat absorption affects biodiversity and the crucial algae blooms under the ice — samples she and her research assistants shipped from the icebreaker to Clark for further experimentation.

Why should anyone care? Frey posited: Because the Arctic seas represent “critical linkages in the food-chain ecosystem.” An “overwhelming biomass” exists atop and below the Arctic sea ice — from tiny brittle stars, to sea birds, seals, whales and polar bears.

Many scientists forecast the disappearance of arctic sea ice by 2030, Frey noted. Do dramatic sea ice loss and a warming arctic signal the point of no return? Scientific models do show potential for reversal, if the planet cools, Frey said. But, she added, loss of sea ice and Arctic warming represent “arguably the most important changes in our lifetimes.”

Frey relayed the excitement and optimism surrounding the research opportunities in her field and beyond, remarking on the international, interdisciplinary work under way at the planet’s farthest reaches. “Some of the most exciting and creative research takes place at the fringes of science.”