My mother’s birthday is Sept. 11, and I was across the street at the pharmacy buying her a belated birthday card when I heard that American Airlines Flight 11 had crashed into the World Trade Center. I returned to my dorm, Sanford Hall, and went down to one of the common suites on my floor, where a number of my friends lived. In a group of 15 or 20 people we watched for a while as events unfolded. I saw the second plane attack, saw both towers collapse, and in stunned disbelief started thinking: Okay, what do we do? What can I do?

A few other Student Council members and I (I was Student Council president at the time) began to walk around the campus just to see what was going on. I knew Clark had a number of students from New York, and quite a few from Manhattan, so my initial concern was for those families. I ended up in Dana Commons where there was a crowd watching the news coverage on flat screens, and I happened to get there when they started showing some disturbing celebration videos taking place in the Middle East. I looked around, and I thought I saw faces turning. The tenor in the suite where I’d watched events unfold was really just shock and disbelief and concern, but in Dana Commons, anger and blame came across most clearly. And that seemed to be exactly what Clark was designed to prevent or eradicate; not what it should be fostering.

Even though the campus has always been very open and accepting, traumatic events tend to cause significant changes in even the best places, and I was worried about that happening — so a group of us on Student Council decided that the best forum to address 9/11 was a candlelight vigil. We went down to the hardware store and bought up every candle and cup that they had; we scheduled the vigil for the next day. I took it on myself to announce the vigil and decided it shouldn’t just be an event announcement; that if I was going to blast something to everyone’s email inbox, I should take the opportunity to say something a little more meaningful. 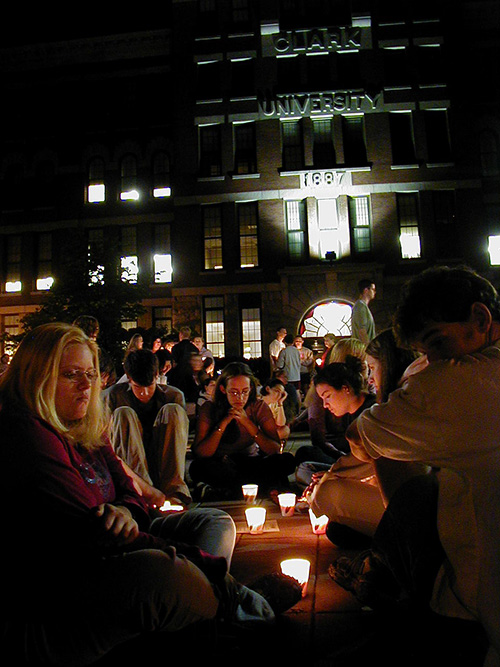 I spent hours staring at my draft, trying to think about word choices. As Student Council president, you don’t have a lot of opportunities to say something that will have an immediate impact. Given the nature of the event, and the community’s response in the hours and days following it, I was determined not to inadvertently stumble into some inelegant word choices that could cause more harm than good. It hit me after looking at the finished draft that I couldn’t believe I was doing this. I couldn’t believe this had happened. I couldn’t believe I needed to say these things, or think that saying these things might actually do some good. I was very reluctant to finally hit “send,” to transmit the email to Dean [of Students Denise] Darrigrand, who would send it to the student body. It took me a long time to actually get if off of my screen and into her email box.

After the message went out, I got a lot of very moving emails from students, from alumni, and from others in the Clark community. People were just looking for some way to connect, because the attacks seemed to tear everything apart.

The vigil had no formal agenda. There were no speakers, no formal remarks. We just provided a place, some candles, and a sense of community. It was very moving, very emotional — in a variety of senses. The campus green was overflowing with people and flickering light; many lingered and let their emotions come out. This was the first time I think a lot of people really processed what happened and moved from a stage of shock to one of abject sadness.

I thought a lot about the vigil after the announcement that Osama Bin Laden had been killed, and I contrasted the memory of those tearful faces illuminated by candlelight with the jubilant celebrations in front of the White House a decade later. Talking with folks who celebrated the news, I can understand their sense of relief. But I am quite proud to have been a part of the former image, and I think it’s more reflective of the kind of world citizens Clark creates.

Rich Fields ’03 is a lawyer and a consultant in Boston. The above essay was originally published in the fall 2011 issue of Clark magazine.