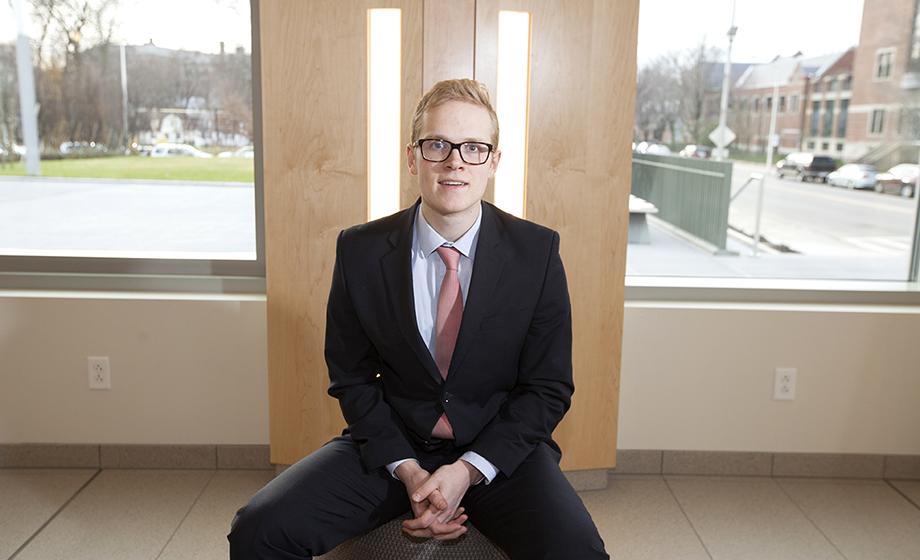 Clark University’s computer science and mathematics majors found plenty of ways to apply what they learned this year. Not only did six undergraduates place in the top 10 in a recent regional computing contest, but students also lined up jobs and internships at Amazon, Goldman Sachs, Bloomberg, Morgan Stanley, IBM, NetApp, TD Ameritrade, and more. Another graduate had his pick of graduate schools after being accepted into several mathematics programs. A number of rising seniors will conduct research with faculty on campus, via Clark LEEP Fellowships and the Interdisciplinary Summer Research Program.

“We have excellent students in computer science and mathematics who have diverse interests and talents, and they play active roles in campus life. Their success demonstrates the value of a Clark education,” says Li Han, chair of the Department of Mathematics and Computer Science and associate professor of computer science.

Three students in the Class of 2018 graduated with Outstanding Achievement in Computer Science Awards, and have landed jobs in the industry:

The Outstanding Achievement Award in Mathematics went to Michael Gaiewski ’18, a double major in mathematics and economics who was admitted to several doctoral programs and ultimately decided to study mathematics at the University of Connecticut.

All four award winners stressed the influence of faculty who provided them with opportunities, guidance, and advice throughout their time at Clark.

Gaiewski worked in the bioinformatics laboratory of Jacqueline Dresch, assistant professor of mathematics. He says she taught him, “Don’t forget your math. Don’t get hung up on something without thinking about it mathematically first. Remember your math first and use what you are good at.”

Gaiewski will continue working with Dresch this summer on their bioinformatics project and publication before he heads to UConn. “Professor Dresch was the main reason I got into research and decided to pursue a Ph.D. She always makes herself available, and listens to students’ ideas and input,” Gaiewski says. As for his time at Clark, he says, “It’s been a great four years.”

Rentsman points to Han’s support and guidance in helping him succeed at Clark.

“Professor Han has helped me develop my problem-solving skills to an extent which I could have never imagined when I first declared a major in computer science,” he says. “She’s helped me find various opportunities inside and outside the CS Department, and guided me in the internship search process. Her consistent advisement and motivation has paid dividends regarding my current career opportunities and overall outlook on software development.”

Burgess recalls how Han encouraged him to join C4, which he says has been “great for career development because it shows problem-solving skills and a competitive edge.”

During his freshman and sophomore years, Roznovjak conducted research with John Magee, assistant professor of computer science, in accessible computing, helping people with disabilities interact with the computer, and in computer vision, which is used in multiple applications, including artificial intelligence. (Read more about Jiri Roznovjak’s search with John Magee.)

“Professor Magee gave me a great opportunity to work on research,” Roznovjak says. “One summer, I worked with him at Boston University. He also enabled me to attend a conference on computer vision. That definitely served as an inspiration. Later on, he gave me the freedom to pursue research topics of my own interests, which contributed to my academic development.”

Computer science and math majors have lined up these internships for the summer. Among the students who responded to inquiries about their summer plans:

Six computer science students participated in the 2018 regional programming contest for the Consortium for Computing Sciences in Colleges Northeast (CCSCNE), part of two teams that placed in the top 10 out of more than 30 other colleges and universities.

“The students all did very well. They worked hard in their preparations for the posters, presentations, and programming contests, and we appreciate their efforts in representing Clark so well,” says Li Han, associate professor of mathematics and computer science and the faculty adviser for C4.

John Magee, assistant professor of mathematics and computer science, also donated his time, accompanying students to the conference and advising some of them on poster projects. The conference accepts only about half of all papers submitted.

Ella “Bernie” Tuson ’19, David Muckle ’18, Bezawit Ayalew ’19, and Christina Zymaris ’19 presented their posters, with Ayalew and Zymaris representing their co- author, Tiffany Kayo ’19, who was unable to attend. Topics included the creation of ClarkEats, a platform through which users can list excess food to share in hopes of decreasing waste; the social effects of video games; and the analysis of software languages.

Clark’s teams have been very successful over the past several years, Han says. Burgess, Rentsman and Roznovjak competed in ACM International Collegiate Programming Contest (ICPC), considered the premiere global programming competition conducted by and for the world’s universities, in fall 2016. They advanced to North East North America (NENA) Regional Final.

“Clark has participated in ICPC twice and advanced to the NENA Regional Finals both times, one of very few liberal arts colleges in this region to compete with teams from the world’s top universities, including MIT, Harvard, Brown, and McGill,” according to Han.