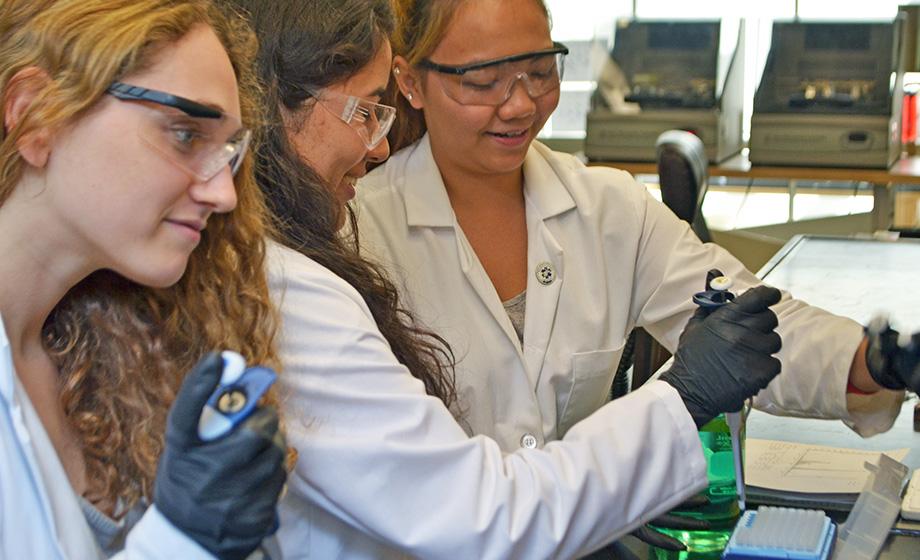 Clark University juniors Navid Al Hossain ’18 and Michael Gaiewski ’18 spent the summer delving into the mathematical modeling of gene expression, the process through which genetic information in DNA drives the synthesis of protein products. They worked in the laboratory of Jacqueline Dresch, an assistant professor in the Department of Mathematics and Computer Science.

“It’s been an amazing experience,” Hossain says. “I’d never done real research before, and there was a cool, creative side to it.”

“Beyond the experience of working in a laboratory, students are gaining skill sets necessary for their next steps, whether in a STEM [science, technology, engineering, math] lab or in the field,” says Nancy Budwig, associate provost and dean of research. “We’re giving undergraduates the opportunity to see how scientists work across the disciplines and to learn the techniques necessary to become successful after graduation.”

Biology senior Emile Ogisu ’17 of Japan and biochemistry and molecular biology seniors Lara Prosterman ’17 of San Francisco and Pinky Htun ’17 of Myanmar spent June and July isolating, purifying and studying proteins using state-of-the-art lab equipment, including a high-speed centrifuge and a nuclear magnetic resonance spectrometer. They worked in the lab of Donald Spratt, assistant professor of chemistry and biochemistry and Carl J. and Anna Carlson Endowed Chair in Chemistry.

“Once you understand a protein’s mechanism, you can design better drugs, which can be used in future cancer treatments because most of the proteins we study in the Spratt Lab are involved in various human diseases,” Ogisu explains.

Meanwhile, Jiri Roznovjak ’18, a computer science and math junior from the Czech Republic, teamed with Boston University scientists to develop algorithms that generate and organize images, research that could be applied to artificial intelligence. His summer experience resulted from a cross-institutional partnership forged by Assistant Professor John Magee of  Mathematics and Computer Science.

Throughout the summer, the students attended weekly seminars and professional development workshops and presented their findings to faculty and peers.

To lead off the summer series, Budwig asked the faculty mentors to give five-minute, one-slide PowerPoint presentations on their deeply complex research.

“This was a daunting challenge, actually, trying to get this down to five minutes,” Justin Thackeray, associate professor and chair of biology, told the audience of undergraduates, graduate students, post-doctoral researchers and faculty.

With 30 seconds left, he quickly explained how his lab is working on research that could help identify drugs that would inhibit protein molecules like PLC-gamma, which can disrupt these signaling pathways and lead to diseases like cancer.

Similarly, other faculty rose to the challenge: Magee discussed how his computer science research could be applied to improve the lives of people with disabilities; Spratt explained how he studies protein-protein interactions involving a protein called ubiquitin, and how his research team seeks to understand the underlying mechanisms that a family of enzymes use to control the proper attachment of ubiquitin to specific proteins in the cell, research that could be used in the future development of disease-fighting drugs; Dresch outlined how she uses mathematical tools to better understand gene expression and embryonic development; Charles Agosta, professor of physics, presented an overview of his work on superconductivity as well as renewable energy; Shuanghong (Sharon) Huo, associate professor of chemistry, summarized her lab’s computer simulations of protein folding, which underlies biological function and, in the case of misfolding, can lead to disease; and Néva Meyer, assistant professor of biology, described her research into how centralized nervous systems evolved.

And then there was the slide depicting a bowl of spaghetti atop a child’s head. Denis Larochelle, associate professor of biology and program director of biochemistry and molecular biology, used that image to convey what happens when otherwise highly organized chromosomes become disordered, “like a bowl of pasta, sort of randomly spread within the nucleus.” Such disorganization can result in conditions like progeria, a rare genetic disorder that causes advanced aging. He mentioned a TED talk by Massachusetts teenager Sam Berns, who died from the disease in 2014.

Budwig urged the students to pick up pointers from their mentors’ presentations.

“You saw a lot of different ways the faculty approached this task,” she said. “What was memorable? What helped convey the information? Some of the people used their verbal language. Others used images about what they were talking about; others used images as metaphors, like Professor Larochelle’s bowl of spaghetti.”

Later in the summer, it was the students’ turn to give five-minute “elevator pitches” on their research.

To demonstrate how to apply research in computer vision and machine learning, Roznovjak showed an image of the University’s Jonas Clark Hall, merged with a Van Gogh painting. To generate the third image, he used deep neural networks, an algorithm that learns from real-world data to, among other things, recognize the style and content of two images and ensure they are not the same. Facebook, for example, uses the same algorithm for facial recognition, and such visual application can be used for augmented reality in games and movies, as well as artificial intelligence.

“The deep neural network used to generate this image works in a similar way as the human visual cortex,” he explains. “It has been trained on a large dataset of real-world images, therefore it is ‘familiar’ with how the world looks like. We can leverage the understanding the neural network has about the visual world to extract the style and the content of an image and generate new images. The result takes into account the content of the image and looks much more profound than what you would achieve using, for example, Photoshop filters.”

This summer, he was thrilled to work in a “very hot field. Most of these papers were published in the last couple years, and some just this past June,” he says, “so it’s been really exciting to work on the frontier.”

Funding for the program goes for two more years, according to Budwig.

“This inaugural year has been phenomenal,” she says. “Over the course of the summer, the students not only participated in world-class research but joined Clark’s larger STEM community of faculty, staff and graduate students as contributing members, framing questions in novel ways and adding fresh insights to ongoing research. We look forward to giving more undergraduate students the opportunity to participate in the program.”