The Mother of Cartagena 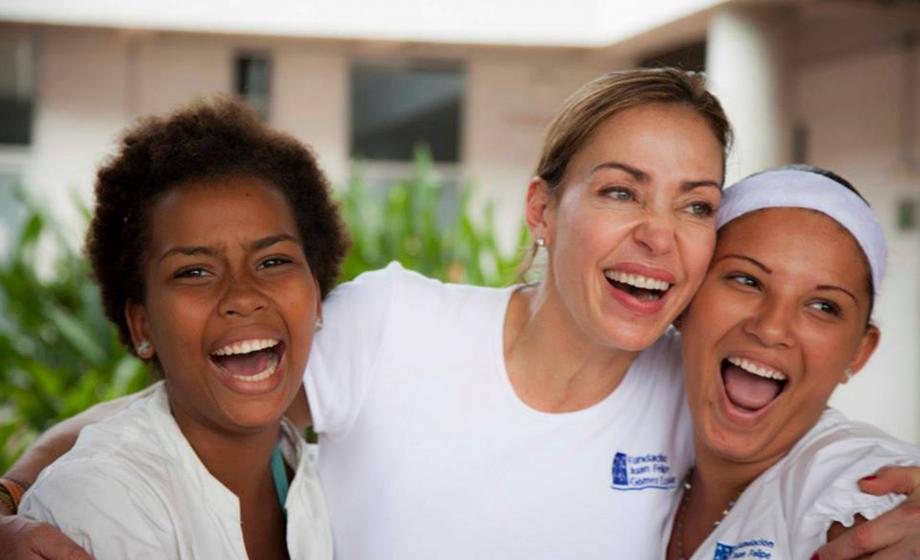 They are young, they are poor, very often they are pregnant. The babies they bear, if they are female, seem destined for the same lives of oppression and poverty as their mothers. That is, if they live. These children of children often do not survive beyond birth.

The girls in Escobar’s home city of Cartagena, Colombia, awaken a pair of painful memories in her.

Thirteen years ago while volunteering at Rafael Calvo Maternity Hospital, Escobar cradled a dying baby in her arms. The infant could have been saved by a treatment that cost $30, money that her mother didn’t have. Escobar later realized she had that amount in her own pocket.

A few days later, Catalina’s 16-month-old son, Juan Felipe, was killed when he fell from the balcony of the family’s eighth-floor Cartagena apartment.

The heartbreak was paralyzing at first, yet it also pulled Escobar’s thoughts back to the Rafael Calvo maternity ward, and to the infant who struggled to the end.

Juan Felipe’s death was a tragic accident, but Escobar knew that other Colombian women were losing their children because they lacked the resources to care for them. She knew that destitution and abuse continued to crush the women and girls of Cartagena, and that a lack of opportunity was practically assigned to them from the moment they were born. Though her own financial circumstances were better, Catalina still shared their sense of loss.

“When you bury your own son, you start being a part of those women’s souls,” she says.

And she decided that no mother should have to feel that grief.

The Juan Felipe Gomez Escobar Foundation, Juanfe for short, grew from Escobar’s sorrow. She founded the organization with the goal of reducing the rate of infant mortality and teen pregnancy in Cartagena, and to break the city’s cycle of deprivation.

Thirty percent of Colombians live in poverty, with 10 percent earning less than $100 a month. The dire conditions are perpetuated by rampant teen pregnancy — 20 percent of women who give birth in Cartagena are teenagers.

In the slums of Cartagena, multiple generations of a family live together, and there can be upwards of 16 people living in one small house. Children routinely witness different family members having sexual relations, Escobar says, noting that girls often start being touched inappropriately at age 6 or 7, and graduate into sexual relationships by the time they enter puberty.

“They see sex [at a young age] as a normal thing,” she says. “They don’t know anything else.”

Of the girls who enter the Juanfe programs, 70 percent have their first pregnancy between age 14 and 16. At least 30 percent have been sexually abused. Poor girls are more likely to be recruited by the nation’s guerrilla fighters and used as sexual slaves.

“If you want to live in disgrace in my country, you just have to be a girl and be poor. You don’t have any chances at all.”

The Foundation operates an educational and social center where the teen moms go every day. During their first six months in the program they receive health care, intensive counseling and education. The second phase takes longer: along with health care, counseling and high school education, they also attend skills workshops (currently, in gastronomy, tourism and cosmetology). The goal is to get them into a normal trajectory of teenage development. At the same time as the young mothers are learning, their babies are cared for and fed in the foundation’s Comprehensive Center for Child Development.

Cartagena sees 4,500 teen pregnancies every year. Juanfe enrolls about 450 of the pregnant girls, who must commit to following the organization’s rules. “We have very difficult protocols to enroll them. It’s hard,” Escobar says.

The Juanfe girls return home at night. Generally, the families in their crowded houses are not encouraging, Escobar says. “When the girls start having opportunities, [some family members] feel jealous — they want to pull the girls down.” Ironically, this is a prime reason why Juanfe doesn’t offer housing for the teen mothers. “They have to learn to fight against their problems at home,” Escobar says. “It makes them stronger.”

Many of the girls’ mothers are supportive, she adds, but the family structure gives little power to females.

Escobar proudly reports that 99 percent of the girls she’s helped have not had a second unwanted baby. Through the Foundation they learn skills to be productive members of society. Without these interventions, she says, the cycle of unemployment, infant mortality, gender violence, and sexual abuse continues.

When she speaks about Juanfe and “her girls,” Escobar frequently mentions outcomes and impact. She launched the foundation in 2002 wanting facts about the infant mortality rate — 40 deaths per 1,000 births at the time — and how much it cost the city.

“Just like in business, you have to study the market, focus, and find a niche,” she says. The Juanfe model, Escobar says, is replicable, scalable and sustainable — as all business models should be — but its “product” is the reduction of poverty.

By 2009, the infant mortality rate in Cartagena had dropped to 16.6 per thousand births, much of it attributable to Juanfe’s work, Escobar says.

“We have given these girls an opportunity to be socially productive in life. Seventy-six percent of them either study or work, and have a better standard of living,” she says. Escobar runs Juanfe with strict business principles, something she learned at a young age. Her father was an entrepreneur who built one of the country’s most profitable steel companies. Her older brother, Mauricio Escobar ’91, studied business at Clark, and Catalina followed him to the University, majoring in management. Prior to starting Juanfe, she worked in the financial sector, running a successful international trading company.

“The Foundation is a business,” she reiterates. “It’s not only doing good for people; it’s measuring impact. Companies have revenues and expenditures, and at the end of the year they have shares for their partners. We measure return on investment as a return of impact on every dollar we invest in society.”

Despite her clear successes — lowering the number of teen pregnancies, helping 4,500 teenage girls and their babies, building the Juan Felipe Medical Center, which treats 23,000 of Cartagena’s poorest citizens each year — Escobar is discouraged.

“This year has been pretty hard,” she admits, “and I don’t think things are going to change in the next three years. There’s a lot of uncertainty in my country.”

Taxes in Colombia have risen, and unlike in the United States, there is no financial incentive to donate to charitable causes. “When people donate, it’s because they really like the cause, not because they have a tax exemption,” Escobar says. “For corporate donors, when costs increase, the first thing they do is lower contributions.”

Increased taxes and an ongoing oil crisis have led to significant revenue loss for Juanfe, which relies heavily on corporate donations. “One-third of my corporate donations come from oil companies, so I’m having a hard time this year getting those funds,” she says.

Government funding makes up just 1 percent of Juanfe’s income. “I see so many nonprofits in the United States that are similar to what I do, and they have tripled their budgets with half of the impact I have — and 50, 60, 70 percent of their income comes from the government.” Colombian money that is earmarked to help the poor — subsidized by the middle and upper classes — instead pays for political favors, she says.

Along with sharply declining income, Escobar is fighting against a culture still reeling from 50 years of guerrilla warfare, which arose in the 1960s as part of a communist movement seeking equality for the lower classes. “Nowadays, terrorism is a business,” Escobar says. “FARC [Fuerzas Armadas Revolucionarias de Colombia, or the Revolutionary Armed Forces of Colombia] is the oldest terrorist organization in the world, 54 years. I grew up with the guerrillas around in the rural areas.”

FARC is also one of the richest terrorist groups in the world, according to Forbes magazine. The organization makes its money from war and drug smuggling, and the government is trying to get a handle on the problem by crafting a peace treaty. Negotiations have been rocky, and FARC has been reluctant to comply. “I’m not sure they want peace, so they are buying time to potentially get more guns for more terrorism,” Escobar explains.

Despite constant warfare and rampant corruption that have created dramatic income inequality, government indicators proclaim that Colombia’s GDP is growing more than 3 percent. “That doesn’t measure overall wealth,” Escobar notes. Years ago “Colombia had the twelfth greatest level of ‘social despair’ in the world, and now we’re fourth. And I don’t see big government programs to stop poverty.”

Escobar’s work has not gone unnoticed by the international community. She was awarded a Fortune/U.S. State Department Global Women’s Mentoring Partnership in 2012, and attended a conference led by then-Secretary of State Hillary Clinton. She travels to New York several times a year to network with potential partners and donors, and this past summer she attended the World Economic Forum in China.

In 2012, Escobar was named a CNN Hero at a gala that attracted prominent figures from the worlds of news and entertainment. At the event, attendees were shown a video of Escobar and the Juanfe operations. One of the teen mothers interviewed explains how important the work has been to her: “At the foundation, I’ve learned to value myself — and love my daughter.”

“Catalina is a force of nature,” Kristof told CLARK alumni magazine in an email. “I’ve interviewed so many people around the world, and I’m hard-pressed to think of someone as passionate and committed as Catalina. And while Cartagena and Colombia still have plenty of problems, she’s registering real progress against some of the most important challenges.”

Despite its growing GDP and oil exports, Colombia remains a “developing” country, according to the United Nations. Escobar knows what must be done to get her country off that list.

“What drives the development of nations is investing in women and girls,” she says. “There is a close correlation between teen pregnancy and poverty, and between girls in school and their successful development. If a girl attends one year of secondary education, she’ll earn between 15 and 25 percent more than if she stayed out of school.”

Initiatives such as “He for She” and “Girls Not Brides” raise the issue of female empowerment, but investment leads to better nations, Escobar insists. “Women are the ones who structure the families in society,” even if they’re not at the top of the familial pecking order, she says. “To reduce poverty, you should target what is more sustainable and efficient.” This includes providing girls with education, access to proper medical care, nutrition, and equal wages — the tools for success.

In her blog at APathAppears.org, Escobar sums up her feelings about her philanthropic enterprise that has changed so many lives in Cartagena.

“Every time I see one of my girls fulfilling her dreams by graduating from our program, having a responsible sex life, being employed, earning a decent and stable income, breaking those chains of poverty, I feel like the proudest mom ever.

“All of the girls we have worked with are my daughters.”

This story was published in the fall 2015 CLARK alumni magazine. Catalina Escobar ’93 was an honorary degree recipient and speaker at Commencement 2016.