Clark University awards degrees in 112th Commencement exercise; Escobar to graduates: 'You are graduating with a remarkable set of tools to stand up for what's right'
By Clark News and Media Relations 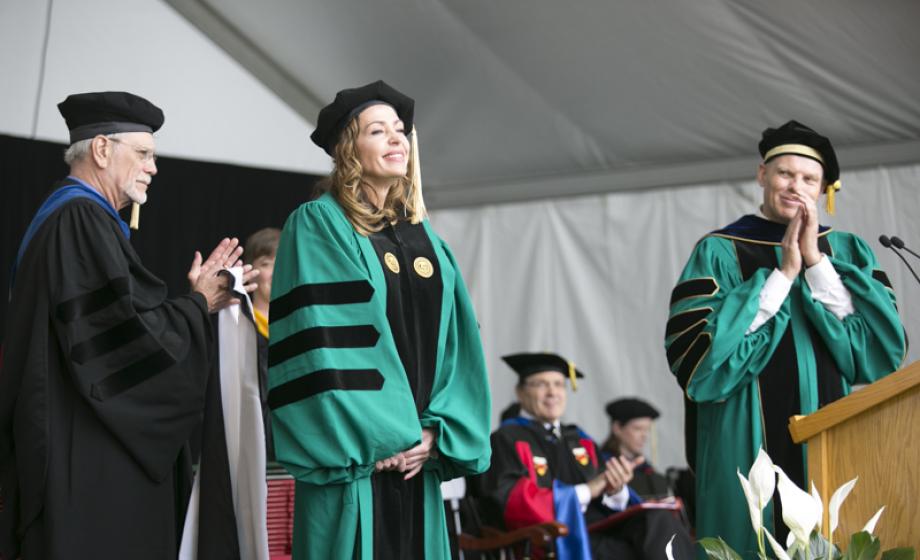 Clark University held its 112th Commencement on Sunday, May 22, awarding 558 bachelors, 568 masters and 30 doctoral degrees. The graduates, who received their degrees in a ceremony held on the campus green, represented more than 64 nations.​ 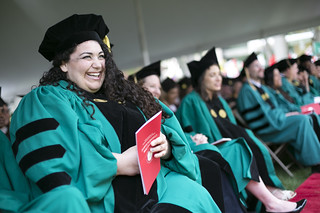 “The difficult challenges facing our world require courage, creativity, partnership and vision,” Angel said in his opening remarks. “Your Clark stories inspire us that you can change the world for the better.”

Escobar graduated in 1993 from Clark University with a degree in business administration. At Sunday’s ceremony she received an honorary Doctor of Humane Letters degree.

“Clark did an incredible job at selecting you to join this amazing school, and you are graduating with a remarkable set of tools to stand up for what’s right; we are all counting on you to make the right commitment,” said Escobar, who herself has been internationally recognized for her dedication to the poor — a commitment born of personal tragedy.

“You know, sometimes we have to wait until something bad happens in our life so as to find a destiny to serve others,” she continued. “And that indeed happened to me 15 years ago, when I was working in the corporate world. I started volunteering at a public hospital in Cartagena, one of the poorest cities in my country, and at the same time the richest, when I witnessed how a little baby died because his teen mother failed to raise $30 to pay for the treatment. I had that money in my pocket, but was needed elsewhere a few hours before. Four days later, my second son, Juan Felipe, at the age of 16 months, fell from an eighth-floor balcony and passed away. That incident became the main trigger to start the organization I have run for the past 15 years.”

Seven years after its founding, the Juanfe Foundation lowered the total infant mortality rate of Cartagena by 81 percent. “Today we have saved around 4,200 children from the grip of death and helped over 160,000 patients, all of them in extreme poverty. We have worked with more than 3,200 teen mothers, giving them the chance to break out of their poverty cycles,” Escobar said. “You see? You don’t have to wait until a tragedy comes to your life in order to take action. You just have to make the choice. When people ask me what do I regret in life? My immediate answer is: I truly regret not devoting myself to humanity before. I could’ve done more.”

In closing, Escobar told the graduates to “go out there, be brave, be bold, and be a role model. And when your time comes, be remembered as a person who really left the world a much better place than how you found it.”

Visit the Clark University Commencement 2016 site for photos, video and details about the undergraduate and graduate ceremonies.

“I’m so proud and impressed to say that I’ve seen so many of us doing this every day for the past four years, as individuals, and as clubs. I’ve seen it between Clarkies, and between some Clarkies and the Worcester community.”

“We have a long way to go, but as we move forward, if we remind ourselves of this power, foster it, and spread it to others, we will continue to play a part in changing our world for the better,” Berman said. “While much of our resources that can influence the world are limited, whether we’re ‘poor’ or ‘rich,’ kindness and love are limitless.”

The student speaker for the graduate ceremony was Aakriti Pandey, who received an M.A. in international development and social change. Pandey is from Nepal and was as a captain in the Nepalese Army, serving two peacekeeping missions in Africa.  She is currently working as a case manager at Refugee and Immigrants Assistance Center in Worcester.

“The most valuable experience I had after coming to Clark University was the freedom of movement, freedom of action, and freedom of expression while not violating other people’s rights in the process,” Pandey said.

“The world is full of surprises and so we should be quick to confront all kinds of challenges,” Pandey told her fellow graduates. “The past two years at Clark have made me stronger and given me the community where I belong.”