Paul Allman Siple appeared on the cover of the Dec. 31, 1956, edition of Time magazine, his face framed by the hood of a heavy winter parka.

He had recently been selected to lead the extraordinary 1957 International Geophysical Year expedition to the Antarctic, which involved 65 international scientists and explorers. That was no surprise, because no one, as scientist or explorer, knew more about the Antarctic than he did at that time. The famous explorer Admiral Richard Byrd put it simply, describing Siple as “a born scientist and the best-equipped man there is for this kind of work.” By the winter of 1957, Siple had spent more time at the South Pole than any other individual — almost six years, including seven journeys — obtained his doctoral degree in geography at Clark University, developed the concept of wind chill, named the Clark Mountains in the Antarctic, and become the world’s foremost expert on human survival in extreme temperatures 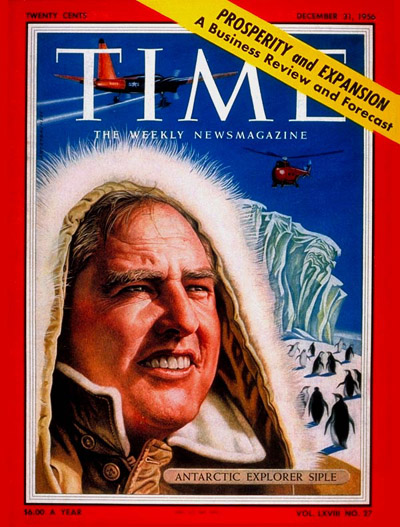 During World War II, Siple served as chief of the Climatology and Environmental Protection Section of a military planning division of the United States Army. Some years later, he was director of Basic Science Research for the U.S. Army General Staff and leader of the Army’s Winter Environment Team. During these years, he vigorously promoted, although unsuccessfully for more than seven costly years, the thermal-barrier-boot and the cold-weather parka. According to a later Pentagon profile on Siple, as many as 10 divisions were lost on the western front in Europe due to trench foot, and the Yalu River retreat during the Korean War was as much due to “frost bite as enemy bullets.” Ultimately, the Pentagon was converted to Siple’s ideas and declared him a winner: “In simplest terms, he is responsible for seeing to it that the Army can fight, that new weapons will work, in any environment in the world.” He even developed a clothing almanac, employing “a color matching key to show what sorts of apparel to wear in overseas climates any month.”

The Pentagon gave him its Distinguished Service Award. Additionally, Siple received three Congressional Medals of Honor for his work on polar expeditions and the Royal Geographical Society’s Patrons Medal, plus a variety of other scholarly and scientific awards.

Clark’s Graduate School of Geography is hosting a special celebration of its 100 years as a transformational force in geography, April 13–15, 2023. Learn more about the centennial event and how to register for the luncheon, dinner, and receptions.