When the world came to Clark

The Graduate School of Geography was launched a century ago with a mission that persists today: to map a better future for our planet
By Anne Gibson, Ph.D. '95 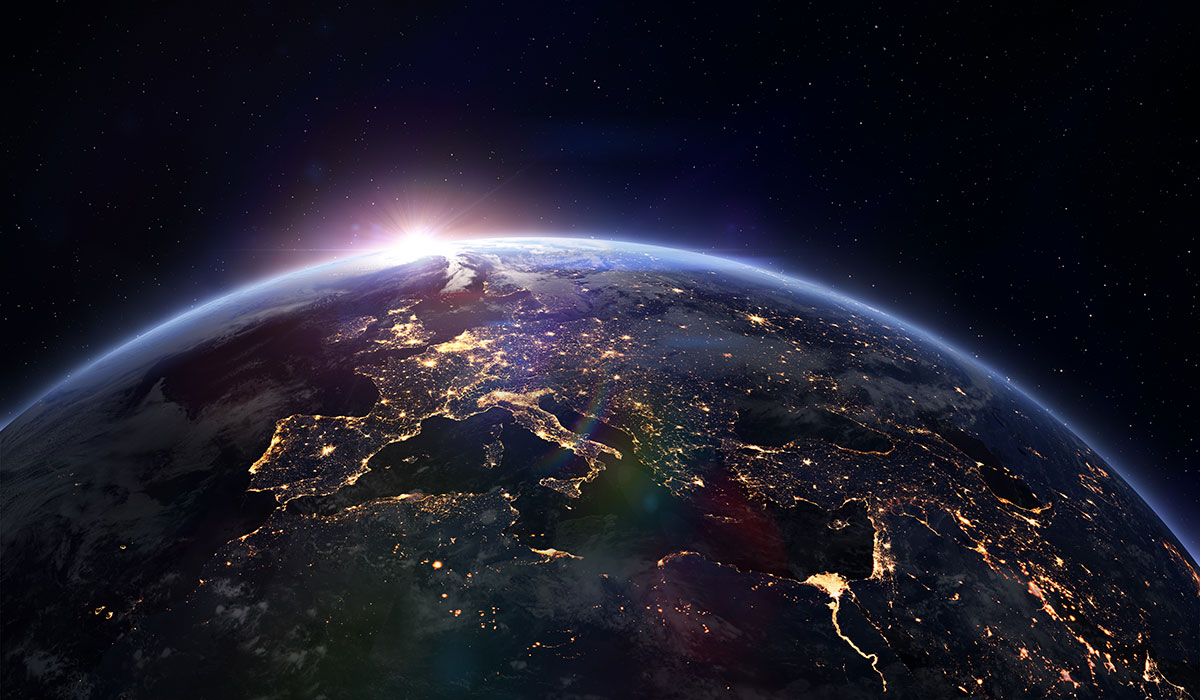 On Aug. 25, 1928, a 170-foot steam barkentine named the City of New York was one of two ships that set out from Hoboken, New Jersey, on the first of famed explorer Richard E. Byrd’s five Antarctic expeditions. On board was 19-year-old Paul Allman Siple, chosen by Byrd from thousands of Eagle Scout applicants to join the undertaking.

Siple would accompany Byrd on five expeditions. After the second, he paused to earn his doctorate in 1939 at Clark University’s Graduate School of Geography with a dissertation titled “Adaptations of the Explorer to the Climate of Antarctica,” in which he developed the theory of the wind chill factor. When he returned to Antarctica with the third expedition, Siple mapped and named the Clark Mountains, designating individual peaks for his wife and six Clark geography professors.

During World War II, Siple was tapped by the U.S. Army for his expertise in cold-climate clothing and equipment. By the time of his death in 1966, he’d served as president of the Association of American Geographers, graced the cover of the December 31, 1956, issue of TIME magazine, and numbered three Congressional Medals of Honor among his many awards for his work as a scientist, explorer, inventor, and author.

The story of Siple is special, but it is not solitary. His narrative is one of many that compose the vivid history and compelling present of Clark’s Graduate School of Geography (GSG), which in 2021 celebrated its 100th anniversary. It’s been a century of powerful scholarship and rigorous instruction characterized by the words with which former Clark President Richard Traina, in his book “Changing the World,” used to describe Siple: “inordinate curiosity, restless spirit and indefatigable energy.”

Clark University President Wallace W. Atwood, one of the professors who lent his name to a peak in the Clark Mountains, launched the Graduate School of Geography in September 1921. Atwood had been a professor of physiography (now called physical geography) at Harvard University, and his selection as president in 1920 had been driven in part by the decision of Clark trustees to establish a second area of graduate research excellence — the first being psychology — that would elevate Clark’s visibility and academic standing. Few U.S. universities offered doctoral degrees in geography at that time, and it was hoped that psychology and geography would become the academic and research pillars that distinguished Clark from its competitors.

That first year, curious students could read an introduction to the new program in the academic catalog, which argued that education in geography was critical to prepare a post-World War I United States to take its deserved place in the world.

“During the last few years the American people have been awakened, in a remarkable way, to an interest, in Geography,” the introduction claimed. “The period of isolation in national development is passed, and we have come to realize, almost suddenly, that the United States of America is one of the leading nations of the world and vitally interested in almost everything that is going on in the world. This awakening, and the consequent broadening of our horizon, have forced us to recognize that we have neglected in this country the scientific study of Geography.”

Among the faculty tasked with carrying forward this energized educational mission were Atwood himself, Charles F. Brooks, and Ellen Churchill Semple. Brooks had founded the American Meteorological Society two years prior. “Miss Semple,” as she was referred to in the catalog, was one of the foremost geographers in the country and had, that same year, assumed the role of president of the American Association of Geographers. A graduate of Vassar College, she studied geography in Europe but was denied a doctorate on account of her sex. Nonetheless, she was the first woman appointed to faculty rank at Clark.

In the century that followed, the GSG would become a global leader in a wide range of geographic scholarship, including physical, economic, urban, feminist, and Marxist geography; human-environment studies, including political ecology and the analysis of extractive industries; and, with the maturing of the digital revolution, geographic information science. Three notable peer-reviewed scholarly journals were born in Clark’s Graduate School of Geography: Economic Geography, today one of the most heavily cited journals in the world, in 1925; Antipode, central to the discipline’s radical turn in the 1960s and beyond, in 1969; and Human Geography, a relative newcomer, in 2008.

A particular strength and point of pride of the GSG is its internationally renowned doctoral program. Over the past century, it has been one of the most important centers of doctoral training in geography in North America. One of its defining features is its global reach: It both draws students from all over the world, and trains students to do research in myriad locations across the globe. Along with that international composition and perspective, the GSG’s doctoral program has long been characterized by a strong sense of community and a constant intellectual ferment. It is no surprise, then, that its alumni have had a disproportionate influence in the field, with many going on to become tenured faculty at other leading departments not just in the United States, but around the world.

Ten GSG faculty and doctoral alumni have served as president of the American Association of Geographers since its founding in 1904.

The Graduate School of Geography long ago accomplished the lofty goal set by Atwood and the university trustees. Its faculty is recognized worldwide for innovative scholarship, as are many of its alumni who hold positions at institutions of higher education in the U.S. and beyond.

Among the researchers notable during their tenures at Clark were the late Robert Kates and Roger Kasperson ’59, who pioneered inquiry into human responses to environmental risk and hazards. Billie Lee Turner, distinguished research professor and former director of the GSG, analyzed changes in land use and land cover; Susan Hanson, distinguished university professor emerita and an urban geographer currently serving as the National Research Council’s Division Chair of the Transportation Research Board, has focused her research on gender and economy, transportation, local labor markets, and sustainability. Dick Peet taught in the GSG for 50 years, building its reputation as a key site for the study of political economy.

Emeritus professors and research faculty in human-environment geography played key roles in building Clark’s distinctive strengths and reputation in this domain: Dianne Rocheleau played a central role in founding and shaping the field of feminist political ecology; Sam Ratick integrated quantitative analysis into the formulation and analysis of environmental policy; and Jody Emel first established the GSG as a leader in the study of extractive industries and helped create the field of animal geographies.

Since the coming of the digital revolution in the latter part of the 20th century, the field of geography has been transformed by the development of computer-based geographic information science and remote sensing, with geographers employing advanced earth observation and spatial analysis technologies to address crucial issues surrounding socioeconomic development and environmental science and policy.

J. Ronald Eastman, GSG research professor and founder and director of Clark Labs, was an early innovator in this field with his development in the 1980s of the IDRISI GIS and Image Processing Software (now TerrSet Geospatial Monitoring and Modeling Software), designed to run on a personal computer. The software’s competitive pricing and compatibility with the Windows operating system made its professional-level analytical and mapping capabilities accessible to budget-conscious researchers, nonprofit organizations, and students around the world, essentially democratizing a valuable resource for examining the world through the lens of geography. Complementing this legacy, the GSG recently decided to establish a Center for Geospatial Analytics.

In 1987, the same year that IDRISI debuted, “The Earth as Transformed by Human Action,” a conference organized by Kates, Turner, and William C. Clark of Harvard University, drew international attention from the scientific community, and resulted in the publication three years later of “The Earth as Transformed by Human Action: Global and Regional Changes in the Biosphere over the Past 300 Years.” The volume was described by its publisher as “the culmination of a mammoth undertaking involving the examination of the toll our continual strides forward, technical and social, take on our world … and to explain the major human forces that have driven these changes.”

The establishment of the George Perkins Marsh Institute at Clark in 1991 grew out of earlier University research clusters that focused on topics like environmental risk and hazards, and the potential of computer technology and remotely sensed imagery to map and analyze the environment. The Institute’s steering committee is primarily composed of faculty from the GSG and Clark’s Department of International Development, Community, and Environment (IDCE), and is driven by “a dizzying assortment of urgent real-world challenges.” Funded projects have addressed topics such as shellfish aquaculture, marine plastics, natural climate solutions, climate monitoring for agriculture, and pollinator conservation. Geography graduate and undergraduate students participate in essential research through the Institute.

A century after the Graduate School of Geography was launched, humans — and the planet — are facing the formidable challenge of climate change. Droughts and wildfires are threatening water resources, forests, agricultural production, and communities. Efforts to decarbonize energy systems and the economy are dramatically changing land uses and economic structures. Rising sea levels, food insecurity, war, and misgovernment are propelling people to cross international borders in search of a better life. Social polarization is disrupting relatively stable developed countries, while social media is rife with misinformation and redistricting alters political maps. The spatial contours and connections of all living things and social structures are shifting.

Paul Siple described the value of geographic thought for tackling complex problems as “a safe way around the crevasse of specialization which other scientists fall into.” Current geography alumni both exemplify and espouse the importance of coupling an area of expertise with a global outlook.

“Geographers craft a perspective of the world which is unique,” says Inbersagren “Sagie” Narsiah, Ph.D. ’06, who is associate professor at the Social Policy Programme of the University of KwaZulu-Natal’s School of Social Sciences in Durban, South Africa. “They have the ability to synthesize a host of often disparate fields of knowledge providing, in a sense, holistic understanding of phenomena.”

“Geography is multidisciplinary in essence, allowing a practitioner to tease out and understand the relationships and complexities in the interactions between humans, societies, environment, weather, and climate — how all these components influence and impact each other. Geography enables us to answer and address challenges arising from these complex interactions.”

“I think the value of a geography degree has grown immensely since I graduated in 2004,” says Shana Johnson, who is vice president at Foursquare Innovative Transportation Planning. “At Clark we developed qualitative and quantitative research skills and gained an appreciation for the interrelationships between the built and natural environments, society, and the economy. If we’re to make progress toward addressing the major challenges of our time, including climate change and the environment, structural racism, and economic inequality, the world will need more geographers.”

Anthony Bebbington, Ph.D. ’90, who is both an alumnus and former director of the Graduate School of Geography, insists that its mission has never been more urgent.

“At its core,” he says, “geography’s great strength is that it engages life in its fullness: life’s material dimensions, its social dimensions, its subjective and spiritual dimensions. Questions about the meaning of life are never far from the surface in our discipline, whether you are studying mangrove loss in Southeast Asia, fiscal crises and race relations in U.S. cities, the thawing of ice caps and permafrost, or energy transitions.

“The principal challenge facing the field is the challenge of human and non-human existence: possibly survival, but certainly the quality of existence. I do think the Graduate School of Geography is in a good place to meet those challenges — and I also think it has no choice.”