Professor Valerie Sperling: Invasion of Ukraine not in Putin’s interests

Over the past year, Russia has been shifting troops to its border with Ukraine. Despite Russian President Vladimir Putin’s assertions that he does not plan a military invasion, more than 100,000 Russian troops have been deployed to the border — nearly eight years after Russia invaded Ukraine and annexed Crimea, an autonomous republic that is an administrative division of Ukraine.

Ukraine became an internationally recognized independent state after the collapse of the Soviet Union in 1991, when more than 92% of its voters supported full independence. But Putin — who served as Russian president from 2000 to 2008, prime minister from 2008 to 2012, and president since 2012 — considers Ukraine a part of Russia (according to Russian popular history, Russian identity was born in the ninth century in the small kingdom of Rus — where Ukraine’s capital, Kyiv, lies today). In Putin’s view, Ukraine’s growing affiliations with other nations, especially Western ones, pose a threat to Russia’s national security. 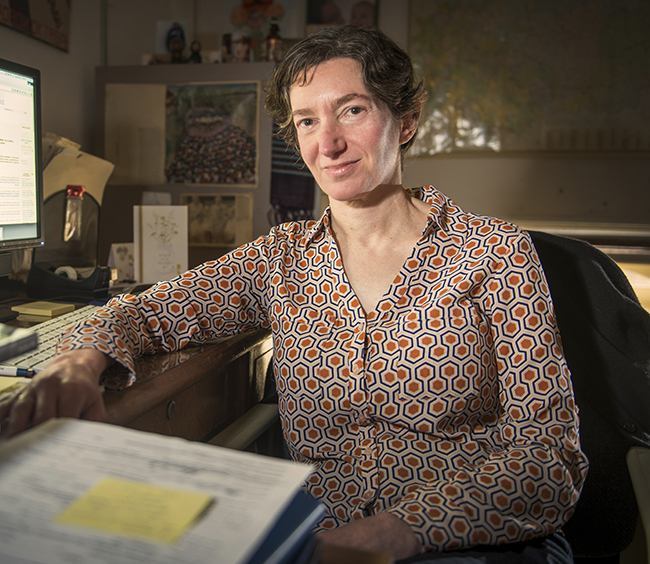 Political Science Professor Valerie Sperling’s research focuses on the intersection of Russian politics and gender studies; she also studies social movements, globalization and democracy, and state-building in the post-communist region. Her 2014 book, “Sex, Politics, and Putin: Political Legitimacy in Russia,” won the Davis Center Book Prize in Political and Social Studies for the “outstanding monograph on Russia, Eurasia, or Eastern Europe in anthropology, political science, sociology or geography,” as well as the Heldt Prize for the “Best Book in Slavic/Eastern European/Eurasian Women’s Studies.”

We asked Sperling her thoughts on the current state of affairs in Russia and Ukraine, where at least 14,000 people have died, primarily in the eastern part of the country, in fighting that began in 2014.

In January, the State Department ordered family members of embassy personnel, and some diplomats, to leave Ukraine, and held a briefing when it confirmed that any movement by Russia across the border into Ukraine would result in an “unprecedented” response. Troops have been placed on alert, with 3,000 troops shifted closer to Ukraine on February 2. Does this signal that an invasion by Russia is imminent?

No. Russia’s goal is still a Ukraine that will never be in NATO, and by spurring conflict in Eastern Ukraine and annexing Crimea, Putin has achieved that goal. NATO is not allowed to admit any states with contested borders (disputes over territory), and Ukraine now has a contested border in two ways — Crimea and eastern Ukraine — the latter is in the state of being a “frozen conflict,” like that in Transdniestria (Moldova) and in Georgia (Abkhazia and South Ossetia). Putin has what he wants: Ukraine cannot become a member of NATO.

On the other hand, if Russian forces invade Ukraine, take Kyiv, and replace Ukraine’s President Volodymyr Zelensky — who is not exactly a threat; he’s not a super-strong populist leader — then they’ve just moved their border closer to NATO and eliminated the buffer zone that Ukraine serves as now. Likewise, if Russia invades full-force, occupies, and annexes the separatist provinces in eastern Ukraine, then Ukraine’s government might decide to let that happen and invite anyone who didn’t want to live in Russia to move into areas of Ukraine that were further west — and then the border wouldn’t be contested, and Ukraine could go right into NATO (presumably, there would be quite a lot of pressure on NATO to accept Ukraine under those circumstances). That would not be in Putin’s interests.

Invasion would also likely result in some very unpleasant economic outcomes, which the Kremlin could ill afford.

If Russia doesn’t invade, what happens? Will they pull the troops back, or will some kind of neutral zone have to be created?

The troops can stay there as long as Putin thinks that they serve a purpose, such as intimidation of Ukraine’s government or of the Biden administration and the other NATO countries’ leadership. Or he may just want to keep everyone off balance and unsure about what might happen next, even if he has no intention of invading Ukraine. The Biden administration and NATO are talking about readying additional US troops for deployment to Eastern Europe, and bolstering their forces in the area. One possible way to de-escalate the situation would be for that deployment to take place, and/or for the NATO forces to be beefed up or moved forward in the region, and then for both sides to negotiate a “backing down” — for both sides to withdraw their forces or back them off. It could be a de-escalation by mutual agreement. But it’s a risky strategy — that kind of brinksmanship could be misinterpreted.

Also, bear in mind that the buffer zone already exists — the separatist regions of eastern Ukraine. It’s not a “neutral” zone, but it’s a frozen conflict zone, and it will remain that way even if Putin pulls his troops back.

Russia invaded Ukraine to annex Crimea during the Winter Olympics in 2014, and invaded Georgia during the Summer Games in 2008. With the Beijing Games beginning this week, is there any reason to be concerned that Putin is planning to invade again while the international community’s focus might be elsewhere?

The international community’s focus is not going to shift from Ukraine as long as there are over 100,000 Russian troops in that area. I think Putin understands that and wants it that way. It keeps Russia in the spotlight and represents a show of strength: a powerful Russian state that is back on the international stage, after that long post-Soviet period of perceived weakness in the 1990s. That’s good for his reputation in Russia, too — he’s not letting the U.S./NATO/the West push Russia around. He’s dictating the terms, keeping everyone off balance, and orchestrating the situation to make Biden and others react to his moves.

I think the situation is different from that during the 2014 Olympics and the invasion of Crimea. That was done much more secretively; Russian troops sent into Crimea didn’t have insignias, and the whole thing was much more hush-hush. A few years ago, Russian policy changed to restrict Russian soldiers’ use of social media to share militarily sensitive information such as troop location — yet we’re not hearing about soldiers being punished for sharing any information about the current, giant troop presence near Ukraine’s border. So that suggests to me that the massing of Russian troops is more for display than for use.

How would you explain to the average American why we should be concerned about these events?

International relations matters. Russia and the U.S. are both nuclear states, and while it may seem to me that Putin has no intention of invading Ukraine and annexing more territory, it’s possible that mistakes or failures of communication could happen on the ground and unplanned escalation could occur, with disastrous results. Also, average Americans should care about human rights and the spread of authoritarianism, both abroad and at home.

To the extent that a freely elected government could be at risk of being overthrown in Ukraine, we should be concerned about that. However, I don’t think this is one of Putin’s goals in Ukraine — Zelensky hasn’t seemed to be a threat to Putin. But if Russia invades, takes Kyiv, and overthrows Zelensky, Putin is well aware that the Ukrainian population may not look upon that with equanimity. During Putin’s generation-long rule, there have already been two revolutions in Ukraine when political leaders seen as illegitimate puppets of Russia have been overthrown [Orange Revolution, 2004–05; Revolution of Dignity, 2014]. If there’s anything Putin dislikes, it’s a “color revolution” — a revolution for democracy, whether in the middle East (as with the Arab Spring) or on Russia’s border. Why would he take the risk of installing a Russian puppet regime in Ukraine and facing a popular rebellion? It doesn’t seem worthwhile.