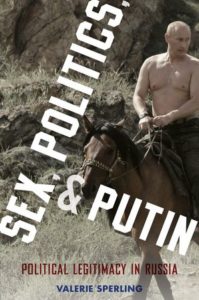 Clark University professor and chair of the political science department Valerie Sperling’s recently published book, “Sex, Politics, and Putin: Political Legitimacy in Russia,” has received the Davis Center Book Prize in Political and Social Studies from the Association for Slavic, East European, & Eurasian Studies (ASEEES) and also the Heldt Prize for Best Book in Slavic and East European Women’s Studies from the Association for Women in Slavic Studies (AWSS).

Sperling’s book, “Sex, Politics, and Putin” (Oxford University Press) investigates how gender stereotypes and sexualization have been used as tools of political legitimation in contemporary Russia. Despite their enmity, regime allies and detractors alike have wielded traditional concepts of masculinity, femininity, and homophobia as a means of symbolic endorsement or disparagement of political leaders and policies. The book explores the Putin regime’s use of sexualization in three areas: political leaders, patriotism, and feminism.

Read Sperling’s recent Huffington Post essay, “Why Trump Could Actually Win: A Look Back at an Alarmingly Similar Race in Russia,” which compared the political campaign tactics of Trump, Carson, and Fiorina with Zhirinovsky, a Russian politician who came into power with no political experience and an outrageous personality popular with voters.

The Davis Center Book Prize in Political and Social Studies is awarded annually for an outstanding monograph published on Russia, Eurasia, or Eastern Europe in anthropology, political science, sociology, or geography in the previous calendar year. Established in 2008, the prize is sponsored by the Davis Center for Russian and Eurasian Studies at Harvard and entails a cash award.

Sperling also will speak at the ASEEES National Convention in November, where she will accept the Davis Center Book Prize.

The AWSS sponsors research and teaching for scholars interested in women’s and gender studies in Central/Eastern Europe, Russia, and Eurasia and seeks to improve the general public’s understanding about women and gender in these regions. In its posting about Sperling’s selection for the Heldt Prize, the AWSS writes: “Drawing on the tools provided by feminist and gender theory, masculinity and sexuality studies, as well as more traditional modes of political analysis, Sperling argues that these practices, although visible to an extreme in Russia, are by no means unique.

In case studies on political youth groups, patriotism, military conscription, pro-natalism, feminism, and, of course, Pussy Riot, Sperling demonstrates how both supporters and opponents of the Putin regime remain trapped within the same patriarchal paradigms, unable to break down the symbolic and rhetorical structures that bolster the regime.”

A review in the September/October issue of The Women’s Review of Books applauds Sperling’s “important contribution with her descriptions of young people’s progressive political and feminist groups, which have emerged despite censorship and repression …. Valerie Sperling’s well-researched and well-documented study provides an important and different lens through which to view and analyze the current neo-cold war conflict between Russia and the West. It is a significant addition to the literature about the current Russian leader, his policies, and the future of his country.” Other publications by Sperling include, “Altered States: The Globalization of Accountability,” “Organizing Women in Contemporary Russia: Engendering Transition,” and “Building the Russian State: Institutional Crisis and the Quest for Democratic Governance.”