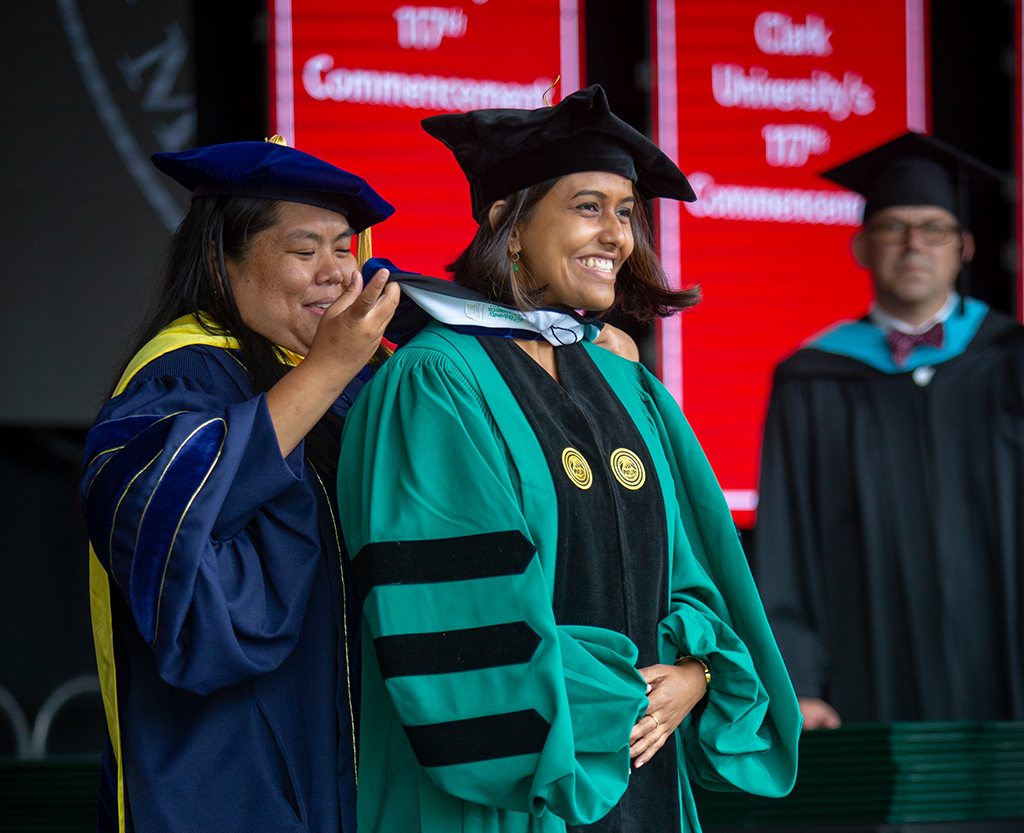 Under clear skies and before an audience seated on Granger Field, Clark awarded 10 doctoral and 501 master’s degrees. Undergraduate degrees will be presented tomorrow, June 13.

Watch the recording of the June 12 Graduate Commencement

Ross Gillman ’81, chair of the Board of Trustees, opened the ceremony and applauded the graduates’ achievements while acknowledging that the past year was one of the “curve balls” they will experience in their lives.

“I can assure you that my four years at Clark both prepared me, and enabled me, to not only face whatever challenges have arisen, but to overcome them with confidence and enthusiasm,” he said. “I know that you will find that to be the case in your own lives. … It is my sincere hope that you will build upon your experiences at Clark and help to make our world, and each of the communities that you participate in, just a little bit better.”

In welcoming the graduates and their guests, President David Fithian ’87 noted that the ceremony was Clark’s first large in-person event since the start of the pandemic more than a year ago. He acknowledged that the students had faced challenges over the year, but that “there is unquestionably truth to the maxim that adversity can also bring out the best in us; we should recognize that alongside evident struggles there have also been moments of triumph, joy, and success.” he said.

“We tend to think of ‘being educated’ as having what we need to know to make our way in the world. But the world changes, as do we. We saw that dramatically this past year,” President Fithian continued. “So being educated is really about knowing and navigating what we don’t know or what we don’t understand fully enough. It is about being equipped to handle things with which we don’t have prior experience or knowledge.

“As you leave Clark, or complete this phase of your time at Clark, I urge you to embrace opportunities to learn something new every day, and to do that by continuing to hone your questioning spirit,” he said.

Davis Baird, who is stepping down on June 30 after 11 years as provost, delivered the Commencement address, offering “a metaphorical reason” for the robes, hoods, and caps worn at the celebratory exercises. He likened the graduates to wizards who are capable of creating something from nothing.

Baird urged the graduates to use their “wizardly powers” to lead and manage change, and to help ensure that transitions — in their lives and in the world— move in positive and productive directions.

“Create the new concepts, the new knowledge, the new technologies, the new processes, the new policies, needed to shift what is possible, to open up to us new and better possible ways of thinking and being in the world,” he said.

“Today also is a transition to a position of increased responsibility,” Baird told the graduates. “Those with wizardly powers have greater responsibility to improve the world. That is why education is a public good. So please take your robes — your academic regalia — and the wizardly powers they represent and do good in the world.” 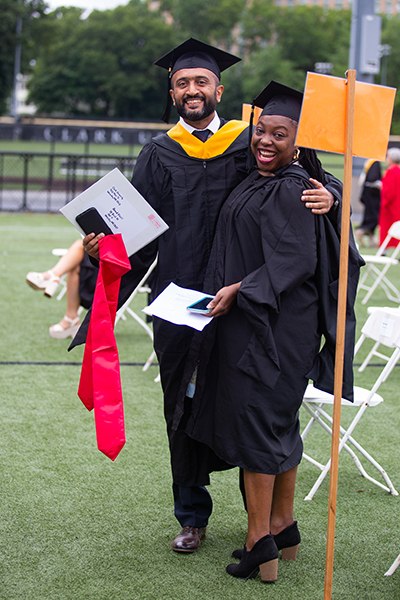 The University will award three honorary degrees at the undergraduate ceremony on Sunday. During the graduate event, a video introduced the honorary degree recipients — Congressman James McGovern, a member of the U.S. House of Representatives for the 2nd Congressional District of Massachusetts; Dr. Naomi Oreskes, the Henry Charles Lea Professor of the History of Science and affiliated professor of Earth and Planetary Sciences at Harvard University; and Ambassador Libérat Mfumukeko, MBA ’94, former secretary-general of the East African Community and newly appointed member to the World Bank. Read more about McGovern, Oreskes, and Mfumukeko here.

Concluding the ceremony, President Fithian urged the new alumni to take pride in themselves and their abilities. “Like the alumni who preceded you, it is now your turn, your moment to take your education and use it to better our world, to lead a life of purpose for yourself and others.

“My greatest hope for you is that you truly relish the unfinished business of the project that is you, that you embrace the joy of discovery still ahead, and that you seize the opportunities to learn even more about the world, yourself, and what fulfills you.”