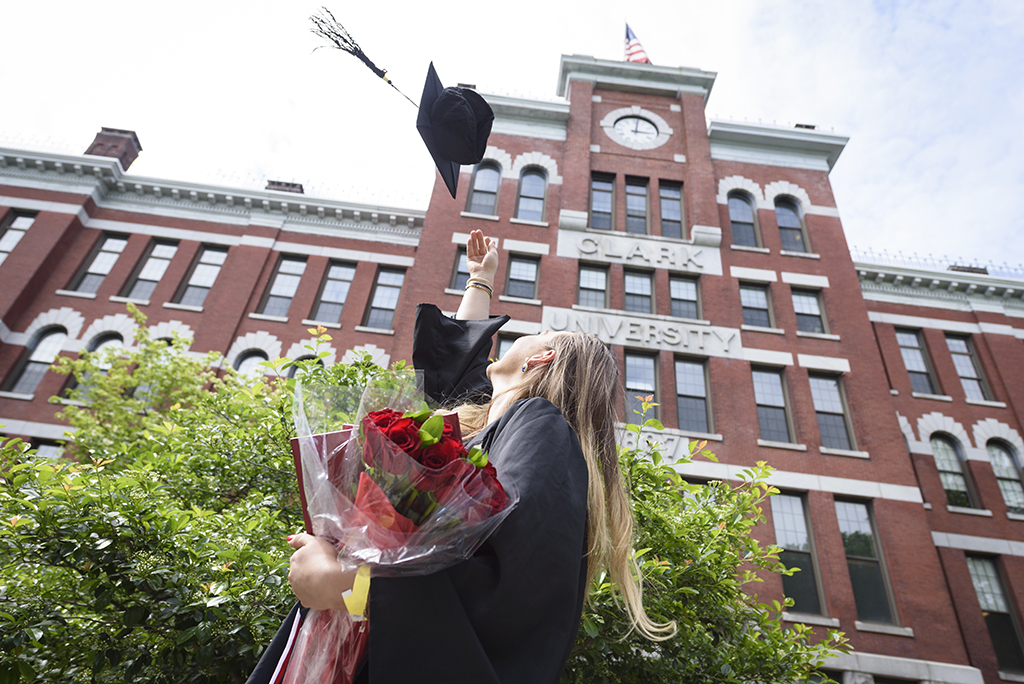 During the undergraduate ceremony on June 13, Clark will confer three honorary degrees.

Rep. James McGovern is this year’s Commencement Speaker and will address the Class of 2021 on June 13. A member of the United States House of Representatives, he has represented Massachusetts’ 2nd Congressional District — which includes the City of Worcester — since 1997.

McGovern was named the chair of the powerful House Rules Committee during the 116th Congress (2019–2020). He currently is a senior member of the House Committee on Agriculture’s Subcommittee on Nutrition and Oversight, where he has led the fight to end hunger in America. He also serves as the chairman of the Congressional-Executive Commission on China, and is the Democratic co-chair of the bipartisan Tom Lantos Human Rights Commission — both of which monitor, investigate, and advocate on behalf of international human rights, the rule of law, and good governance.

While a student at American University in Washington, D.C., McGovern interned in the office of Senator George McGovern (no relation). After earning his bachelor’s in history, he worked for 14 years as a senior aide in the office of Rep. Joe Moakley, a Democrat from South Boston. During that time, he returned to American University and earned a master of public administration degree in 1984.

In 1990, McGovern led the Moakley Commission Congressional Investigation into the murders of six Jesuit priests, their housekeeper, and her daughter in El Salvador. The investigation led to a major shift in U.S. foreign policy that made future military aid contingent on improved human rights and a negotiated peace in El Salvador.

In Congress, McGovern has authored legislation to increase Pell Grant funding to allow more students access to higher education; to provide funds to preserve open space in urban and suburban communities; and to give tax credits to employers who pay the salaries of their employees who are called up to active duty in the Guard and Reserves. He also wrote, introduced, and saw signed into law the Sergei Magnitsky Rule of Law Accountability Act, which allows the president to punish foreign officials whom the U.S. identifies as corrupt or human rights abusers. Congress later applied this law worldwide as the Global Magnitsky Act.

McGovern will receive an Honorary Doctor of Humane Letters degree.

Libérat Mfumukeko, MBA ’94, served as secretary general of the East African Community (EAC) from 2016 to 2021. Born in Burundi, Mfumukeko and his parents lived as refugees in the Democratic Republic of Congo following the massacres committed in 1972 by the Burundi military dictatorship.

After earning his bachelor’s in economics at the Francois Rabelais University of Tours and MBA at Clark University, Mfumukeko held several private-sector positions and served for three years as an economic expert at the United Nations. He also started the Burundian Investment Promotion Agency, working to bring more than 100 companies and 30,000 new jobs to Burundi in just two years.

In 2012, he was named principal adviser to the President of the Republic of Burundi in charge of economic affairs. Subsequently, he was appointed CEO of REGIDESO, Burundi’s power and electricity company, and as chair of the East African Power Pool.

Understanding how much education helped him in his life, in 2013 Mfumukeko created a nonprofit organization, Excellence in Education Development, to raise education in Burundi to international standards. The nonprofit subsequently founded Bujumbura International University, a bilingual (French-English) institution that increases access to education for students who have excellent academic records but come from poor families.

In 2015 and 2016, Mfumukeko was appointed deputy secretary general and then secretary general of the East African Community (Burundi, Kenya, Rwanda, Tanzania, South Sudan, and Uganda). Under his leadership, over $20 billion worth of new investments and projects were achieved in East Africa countries, and the EAC mobilized over $3 billion for infrastructure, health and other projects.

In April 2021, the World Bank named Mfumukeko a representative of the International Development Association, as well as co-chair of the Bank’s 22-nation Africa Group 1.

Mfumukeko will receive an honorary Doctor of Humane Letters degree.

Naomi Oreskes is the Henry Charles Lea Professor of the History of Science and affiliated professor of Earth and Planetary Sciences at Harvard University. She is an internationally renowned geologist, science historian, and author of both scholarly and popular books and articles on the history of earth and environmental science.

For many years, Oreskes has been a leading voice on the science and politics of anthropogenic climate change. Her 2004 essay in Science, “The Scientific Consensus on Climate Change” — the first peer-reviewed paper to document the scientific consensus on this crucial issue — has been cited more than 2,500 times. The article was featured in the landmark Royal Society publication, “A Guide to Facts and Fictions about Climate Change,” and in the Academy Award-winning film, “An Inconvenient Truth.”

Before joining the Harvard faculty, Oreskes spent 15 years as professor of history and science studies at the University of California, San Diego. She also has worked as a consultant for the United States Environmental Protection Agency and National Academy of Sciences.

In 2018, Oreskes was named a Guggenheim Fellow for a new book project with Erik M. Conway, “The Magic of the Marketplace: The True History of a False Idea,” which will be published by Bloomsbury Press in February 2022.

Oreskes’ 2010 book, “Merchants of Doubt,” co-authored with Erik M. Conway, has been translated into nine languages and was made into a documentary film.

Oreskes will receive an honorary Doctor of Humane Letters degree.