Professor Taner Akçam has been presented with the Medal of Courage by the Confederation of Armenian Organizations in honor of his work uncovering the truth behind the 1915 Armenian Genocide. The award coincided with the launch of the French translation of “Killing Orders,” his groundbreaking book documenting the Ottoman government’s central role in planning the elimination of its Armenian population. 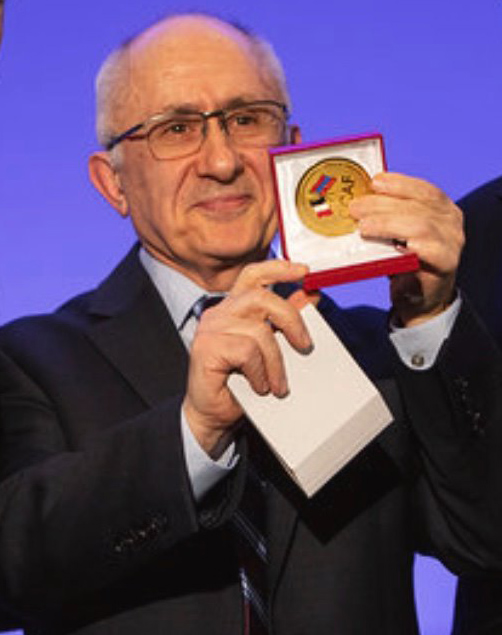 Akçam received the medal at a Jan. 29 Paris dinner attended by French President Emmanuel Macron. “You denounced the denial,” Macron said in his remarks. “You brought out what some wanted to plunge into oblivion, genocide denial. … We don’t build any great story on a lie, on the policy of revisionism or a negationism.”

Macron added that “Killing Orders” is “the scientific establishment of clear intentionality of organized crime.”

In accepting the medal, Akçam said, “The work I do is nothing flashy or extraordinary. It is mundane almost to the point of boring. I simply attempt to speak the truth, the truth, and nothing but the truth. And speaking the truth is not — or at least should not be — an action meriting such extraordinary praise. If so, then why am I here?

“Ironically,” Akçam continued, “the reason I’m here is because of the Turkish government and their policy of denial.” And that denial is not simply an ideological approach to the past, he added. “In truth, the ties between denial and contemporary political problems are strong and cannot simply be ignored. This is something that most European and U.S. politicians fail to understand and is the reason most Western states pay lip service to the recognition of the Armenian genocide, while simultaneously continuing their business-as-usual relationship with Turkey.”

He added, “Denialism is a structure, one that cannot simply be relegated to past atrocities. The denialist structure has produced and continues to nurture policies in the present.” For Turkish people to live in peace in tranquility, he said, the government must acknowledge the atrocities of its predecessor, the Ottoman empire. “Turkey’s denialist policies are a regional security threat, plain and simple.”

Prior to the dinner, “Killing Orders” was presented in French at an event attended by the French Ambassador to Armenia, Jonathan Lacote, whose presence Akçam called “a great honor.”