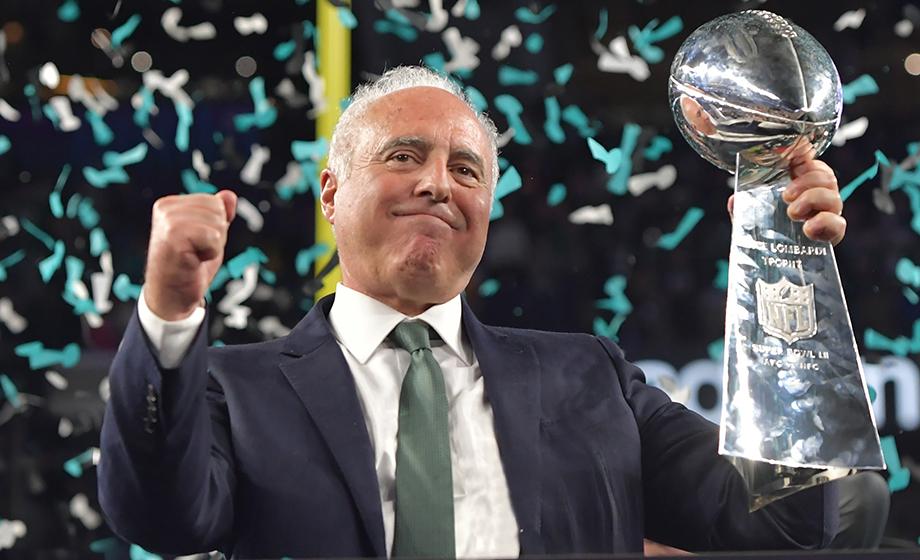 The Philadelphia Eagles led the New England Patriots 41-33 with nine seconds remaining in Super Bowl LII when Patriots quarterback Tom Brady dropped back, scurried away from defensive end Brandon Graham, and heaved a Hail Mary pass toward the end zone. If he could somehow connect for the touchdown, the Patriots would then attempt a two-point conversion to send the game into overtime.

From his box at U.S. Bank Stadium in Minneapolis, Eagles owner Jeffrey Lurie ’73 watched the ball rise, hover, then descend toward a waiting scrum of players from both teams.

The ball was batted into the turf as time ran out, and Philadelphia had laid claim to its first Super Bowl trophy in franchise history.  Amid a blizzard of green and white confetti, Lurie was finally able to appreciate the magnitude of the accomplishment.

“Delivering a Super Bowl to the city of Philadelphia was the culmination of my dream,” he says. “It was a magical moment.”

Lurie, who has owned the Eagles since 1994, became convinced his team could contend for the top prize as he watched them go toe-to-toe with a tough division rival, the Los Angeles Rams, during a late-season game. With superstar quarterback Carson Wentz helming the offense, anything seemed possible.

“I said to myself, ‘Whether we win this game or not, we are fully capable of winning the Super Bowl with this tremendous young quarterback,’” he recalls. “And within 15 minutes of having that thought, Carson tears his ACL and is out for the season. When you have a player like that go down, you’re heartbroken, but we also had the best record in football at that time, so we had to try to make the most of it.”

Football fans know the rest of the story. Backup quarterback Nick Foles led the team to the NFC championship, then picked apart the Patriots in a performance that earned him the Super Bowl MVP award.

Many Clarkies watched the game with divided loyalties: pulling for the Pats to win, yet oddly comfortable with having a former Clark psychology major hoist the Lombardi Trophy on behalf of the Eagles. There are no stats on this, but Lurie is undoubtedly the only NFL team owner who has eaten at the Miss Worcester Diner.

During his early days of ownership, sports and business pundits insisted Lurie had blundered by purchasing a tough-luck team that played in a dismal facility. Since then, he’s built a new stadium, reinvigorated football operations, seen the Eagles’ value skyrocket, and put a charge in a fan base whose zealotry for their team may be unmatched.

“You wake up every day and part of you still can’t believe it,” he says. “Then you think for a few seconds and say, ‘Yes, we are the Super Bowl champions.’ It’s a dreamlike feeling that I have every day, and I never want to give it up.”

Lurie ran into Tom Brady a couple of weeks after the Super Bowl, and the Patriots legend, who has won five titles, told Lurie the first one is the sweetest. The Eagles owner intends to find out for himself.