Graduates urged to plan, focus and ‘be firm but flexible’
By Clark News and Media Relations 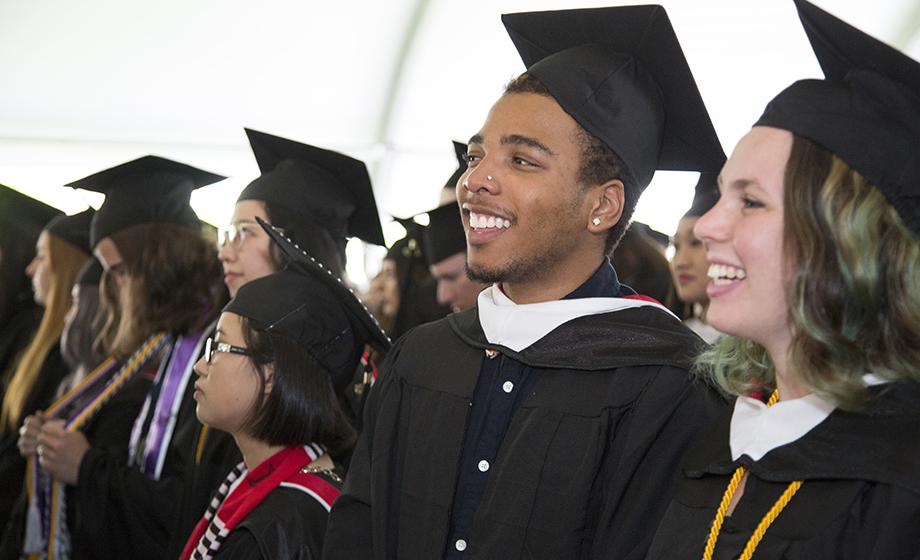 Clark University’s 114th Commencement took place under sunny skies despite the threat of thunderstorms on Sunday, May 20, on the Jefferson Academic Green.  The University awarded degrees to 1,052 graduates (451 bachelor’s, 577 master’s, and 24 doctorates).

Steven Swain ‘89, chair of the University Board of Trustees, welcomed attendees and introduced President David Angel.

President Angel began by relating some Clark history: the first undergraduate class matriculated in 1902, and tuition was free that year; Spree Day was held for the first time in 1903; the first Commencement was in 1905, with President Teddy Roosevelt as speaker. “It rained all day!” he said.

“Clark graduates throughout the decades have made a difference, and we are proud and excited to welcome you to this distinguished alumni community.”

President Angel also said that this year Clark celebrated the matriculation of women at the University — the first female undergraduates in 1942; the first female faculty member in 1921; and the first female trustee in 1962, who later became chairman of the board in 1967 (the first woman in the U.S. to hold such a position at a private university).

“I share this history today, at your Commencement, to acknowledge the community of faculty and graduates of which you are now a part. It’s a community of courageous thinkers and resilient doers who no matter their year of graduation — 1905, 1946, or 2018 — all of these graduates would recognize today’s motto: Challenge Convention and Change our World,” said President Angel. “Clark graduates throughout the decades have made a difference, and we are proud and excited to welcome you to this distinguished alumni community.”

Ibrahim, a lawyer who defends women sentenced to death by stoning under Shariah Law, stressed the importance of focus, of having a plan. “Be firm but flexible,” she told the grads.

“I encourage you to know what you know, and be an authority. For every challenge you encounter in life, there is a solution within. Sometimes you just have to scratch a little deeper to find it.

“I learned in each given situation — as a lawyer, as a teacher, as a mother — to understand the dynamic of what I’m doing and I chose to work within the dynamic,” said Ibrahim.

Ibrahim shared a story about how she approached Northern Muslim leaders (mullahs) who were infuriated with her after a BBC radio interview made her appear anti-Islam and anti-Shariah. Ibrahim insisted on a meeting with the mullahs where she practiced humility, showed them respect, and asked for their wisdom and knowledge.

“That was my dynamic,” she said.

“You will be tested — and when you are tested what should you do? We are going into a new world order that you will be defining, or redefining,” said Ibrahim. “Faith, resilience, and humility will not hurt. When tested, understand your situation and work within.”

The University also conferred honorary degrees upon Susan Hanson and Christine Ortiz. Hanson, distinguished university professor emerita in Clark’s Graduate School of Geography, is an urban geographer with interests in gender and economy, transportation, local labor markets, and sustainability. She is past-president of the American Association of Geographers (AAG) and the recipient of lifetime achievement honors and the Brunn award for creativity from the AAG.  Ortiz is Morris Cohen Professor of Materials Science and Engineering at the Massachusetts Institute of Technology, and founder and CEO of Station1, a new college focused on inquiry-based learning in science and technology for students from underrepresented backgrounds.

Andrés Gvirtz, who earned a bachelor of arts degree and graduated with highest honors in economics, delivered the Senior Address. He recalled that in August of 2014, when he and his classmates first gathered in the Kneller Athletic Center, they looked around at unfamiliar faces.

“Today, those unfamiliar faces are no longer unfamiliar; it is these friends who have defined our college experience,” said Gvirtz. “We are a group that normally wouldn’t have met. We come from 34 different states, 38 different countries and have interests ranging from clinical psychology to the stickleback fish. But look around now. We are Clarkies. We are the class of 2018.”

Originally from Germany, Gvirtz said that over the recent break, his friends and family asked if he was scared, or if he really wanted to return to the United States.

“I have never been worried while at Clark. And the reason for this is that Clark, with its many different and diverse people, is a microcosm of the world we would like to live in,” said Gvirtz. “During the last four years, Clark and its Clarkies challenged our convention, so that we can go out and change our world. And to be honest, this country and the world need us now more than ever.”

Magaly Preciado Reyes, who received a master of arts degree in International Development and Social Change, was elected to present the Graduate School address.

Born in México in 1982, Preciado Reyes spoke of several economic crises she experienced during her lifetime.

“Crises don’t only give way to opportunities for solving problems; they also offer a chance to change our ways and be better,” said Preciado Reyes. “We have had opportunities that most haven’t. And as much as we and our families should feel very proud today, we should also be very humble.

“Challenges are awaiting us as soon as we walk out the door with our diplomas. And it should be our honor and responsibility to be part of the solutions, to drive communities toward change, and to lead by example the generations coming after us,” Preciado Reyes told her fellow graduates. “As we graduate today, let us feel proud and humble to take on such responsibility.”