'I was always looking to come back to a place like Clark,' Kevin Wesley says
By Jim Keogh 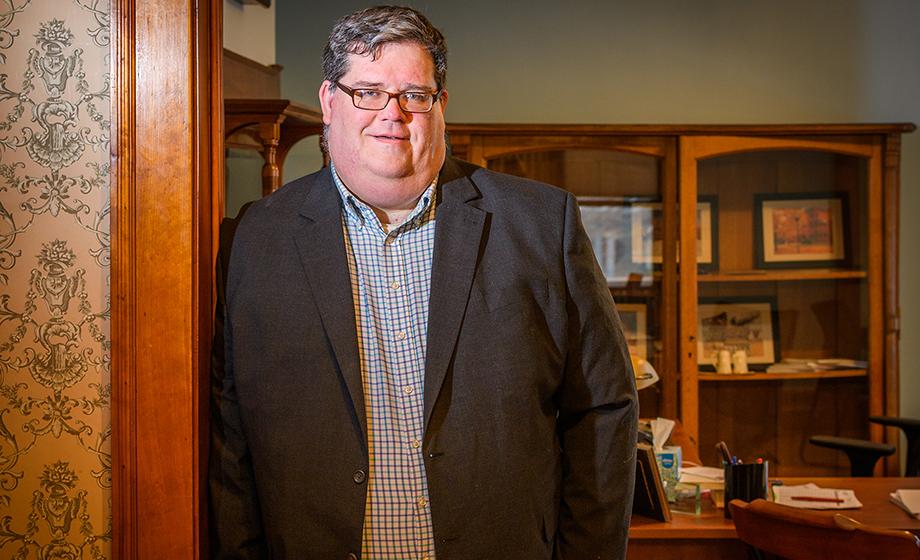 Kevin Wesley is a former journalist who knows how to open a story. So when he places a pair of Fiat Lux salt and pepper shakers on the table while being interviewed, he’s well aware he has just supplied the writer with the perfect lead.

An eBay fan, Clark University’s new executive director of Alumni and Friends Engagement and the Clark Fund collects college memorabilia, and his latest passion has been acquiring Clark ephemera. In addition to the shakers, Wesley is the proud owner of a 1953 Clark Commencement program, a leather seal bearing Clark’s logo, and a copy of a one-act play that premiered on campus in the 1930s.

It’s a fun hobby, and a great way to learn about a school’s history, Wesley says. Yet even in in his short time at Clark, he’s developed an affinity for the institution that is made of far deeper stuff.

“This is a place that has a certain familiarity for me. There’s a special connectedness the students, faculty, administrators and alumni bring to the learning community,” he says. “I think I was always looking to come back to a place like Clark.”

A native of Beverly, Mass., Wesley graduated from Bowdoin College and went to work as a journalist at his hometown newspaper, the Beverly Times, followed by a stint at The Boston Business Journal. He returned to Bowdoin as a public affairs specialist before moving into alumni relations. He’s been in alumni leadership positions ever since, at Carnegie Mellon University, the University of Rochester, Northwestern University and, most recently, Johnson & Wales University. At Rochester, he redesigned the alumni engagement program to support the most ambitious fundraising campaign in the University’s history, ultimately raising more than $1.2 billion.

“I’ve seen a lot of different kinds of institutions and different kinds of alumni bodies, and I’m convinced each alumni group has its own DNA,” he says. “I’m still learning what that DNA is at Clark. It’s part of the joy of my job.”

Wesley is no stranger to Clark. Before joining the University staff in September, he was a consultant to the Clark Alumni Council, offering guidance on restructuring the organization and refining its mission to better represent Clark’s 32,000 alumni.

“It was there that I got the first real taste of the passion people have for Clark,” Wesley says. “These are some of the most dedicated volunteers I’ve ever worked with. They take their work seriously, and that’s very powerful.”

He continues, “I believe at the end of a volunteer experience, no matter what form that experience takes, the volunteer should be able to say two things: ‘It was worth my time,’ and ’I helped an institution I believe in get better.’ My responsibility is to make sure I create a structure that allows our volunteers to do meaningful work and have those enriching experiences.”

Wesley is in the process of growing the number of volunteer opportunities, including creating an advisory board for the Clark Fund. He wants to bring in alumni who have done professional fundraising, and also tap the talents of Clarkies with expertise in areas like digital marketing and social media, “so we can more effectively communicate the importance of philanthropy.”

Above all, he says, he’s looking to introduce more flexibility to how Clark alumni can connect with their alma mater.

“We’re thinking creatively about the volunteer experience and the programs we offer,” he says. “People want to volunteer in different ways. For instance, it’s meaningful for someone to talk about their professional journey with a student through ClarkCONNECT. That kind of interaction can have huge impact on the student and the alumnus.”

Wesley finds current students to be a constant source of inspiration as he investigates ways to promote Clark University through enhanced programming both on and off campus. He marvels at the number of doors Clark opens for its students — in the academic realm, the workplace and the wider world — over the course of their educational experience.

“If the first door isn’t the right one, there are lots of others,” he says. “Clark does a great job of helping students pursue paths they may not even have known they wanted to go down.”

In his off hours, Wesley is a committed fan of Boston sports teams (the Red Sox first and foremost) and a busy husband and father. He and his wife, Gretchen, have three children: Jack, 21, a senior at Amherst College; Sabrina, 16, a high school junior; and Adam, 14, a high school freshman. A fourth child, Sam, died in 2000.

Wesley is gearing up for a robust 2018, including Reunion Weekend in May. He’s mulling ideas for that event that will strike a balance “between opportunities to hear about cool stuff happening on campus and just hanging out with classmates to reconnect and revisit a place that was important to them.”

And like any good journalist, current or former, he’s itching to tell a terrific story.

“I want to be a conduit for getting the greatness of Clark out there.”