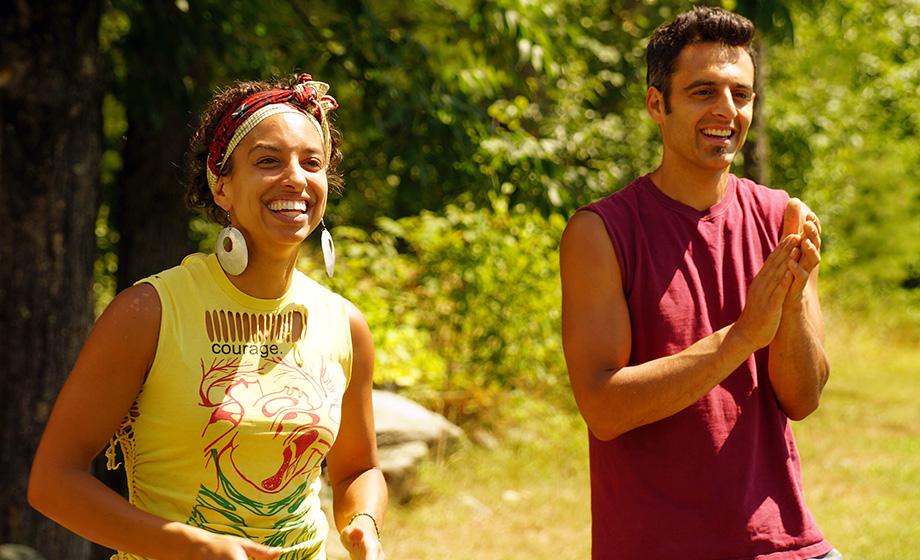 In the summer of 2014, Leah Penniman ’02, M.A.T. ’03, and her husband, Jonah Vitale-Wolff ’02, invited 20 aspiring black and Latino farmers to spend a week at their upstate New York property.

Participants arrived at Soul Fire Farm from nearby cities, and as far away as Florida and California, to “restructure the narrative,” as one person put it, of minority-owned farming in America. Their experience included hands-on training, workshops and shared meals.

The weather didn’t always cooperate — several days featured heavy rain and even hail. But amid the hard labor and lectures on crop cultivation, the Soul Fire crew made sure everyone had fun. They invoked the names of hip-hop artists Mos Def and Wu-Tang Clan to help the participants remember different types of soil chemistries. The week included Thai massage, yoga and improvisational dance. There was a healing drum circle and an impromptu after-dinner dance party, along with songs and poetry. And in the end, a new crop of farmers took root.

Their ranks are still small in number. Today, nearly all farms in the country are owned by white citizens, and Soul Fire Farm seeks to change that. “Our black ancestors were forced, tricked, and scared off of land until 6.5 million of them migrated to the urban North in hopes of a better future,” wrote Penniman in an article for Yes! Magazine.

In 1910, at the height of black land ownership, 14 percent of farm acreage in this country was owned by blacks. Today, it’s less than 1 percent, while Hispanic farms number around 3 percent, according to recent census figures. Yet, Penniman notes, Hispanic farm workers across the country grow about 85 percent of our food on land they don’t own, often in substandard conditions.

Penniman and Vitale-Wolff want to see those ownership numbers rise. Through summer-long internships, week and day programs, and by growing for local “food desert” communities, Soul Fire Farm is bringing social justice to the farming world.

“The message that white America has given black people becomes part of your own self-image,” Penniman says. “The healing is to correct that with reality — that black and brown people are brilliant and capable and hard-working, and our lives matter.”

While Penniman may not have been born with a protest sign in her hands, it wasn’t long after that she took part in her first march.

“She was on my back, in a baby carrier, going to demonstrations,” says her mother, Adele Smith-Penniman, a retired Unitarian minister and longtime activist. “She kind of grew up in the movement.”

In the summer of 1965, when the elder Penniman was 18, the New England native joined 500 other college students in Atlanta. There, they were trained to fan out across the South to help register black voters. “All of the giants of the movement were there,” she recalls, including Dr. Martin Luther King.

Later, Smith-Penniman marched with Gloria Steinem down Fifth Avenue in New York City as part of a “Women of the World Unite” demonstration — the only black woman holding up the banner.

It was in this atmosphere that Leah grew up in the quiet Central Massachusetts town of Ashburnham. As a teenager, she founded a local chapter of Food Not Bombs to gather food donations from local stores and restaurants and prepare free meals in a Unitarian church. Later, she joined The Food Project, which grows food for Boston homeless shelters and low-income communities. This was years before the term “food desert” was coined.

“I just completely fell in love with farming, and never stopped,” she says.

Penniman graduated as her high school valedictorian and received a full scholarship to attend Clark, where she completed a student-designed major in environmental science and international development as an undergraduate and then earned a master’s degree in teaching. For a year, she lived in Dismas House, a Worcester halfway house where college students assist paroled prisoners re-entering society.

“I took full advantage of every opportunity that was offered to do authentic, community-based learning,” Penniman says. “I went after every fellowship, every research assistant position that I could.”

That attitude led her to Professor Richard Ford, who ran Clark’s international development program. Ford brought his Participatory Rural Appraisal program to dozens of villages in developing countries, empowering residents to build roads, improve the water supply and get better access to farm fields. He had recently worked in a small village in Ghana, and invited Penniman to go there to research the program’s success. For four months, she lived in a simple, one-room earthen structure in the rural village of Oborpah-Djerkiti, learning the Krobo language, teaching children and meeting with the village women to support their goals of creating a new market and school.

“Basic mobilization is started by women, because the men aren’t going to do it,” Ford says. “The women are the backbone of the community. It was great for Leah to get into that situation.”

“I was in way over my head,” Penniman confesses. “But I think I made a modest contribution.”

Much of her time at Clark, and in Worcester after graduation, was spent in the Main South neighborhood where she helped create a number of programs, some that still exist today. Worcester Roots began as a soil remediation project, where volunteers used plants, such as geraniums, to remove lead from the soil of contaminated yards. Another organization, YouthGROW, introduced gardening and farming to low-income youths. The Worcester Global Action Network staged anti-war protests and urged the Clark administration to divest from companies involved in sweatshop labor and military-industrial interests.

Many of these initiatives had one thing in common — a fellow Clark student and geography major named Jonah Vitale-Wolff. He was a Hartford, Conn., native, his mother, a midwife, and father, a pediatrician. A central tenet of the family’s life was the Hebrew expression Tikkun olam, which means “repairing the world.” During and after college, he worked on organic farms in New Zealand, Spain and Central America, and apprenticed at a farm in California.

They met when Leah borrowed a book about Gandhi from Jonah’s suitemate. The two began meeting early in the morning to practice yoga. Later they hiked a section of the Appalachian Trail together. There was no romance at first, but couple-hood seemed inevitable to those around them.

“All of my friends said we were the last ones to know,” Vitale-Wolff remembers.

They married a few months after graduating in 2002, in a ceremony officiated by both Leah’s mother and Jonah’s uncle, a rabbi. The food was potluck.

They soon moved to Collective-a-Go-Go, a land trust and urban commune on the edge of Worcester, where members shared bicycles and tools to grow food on the property’s six acres. Worcester Roots co-director Matt Feinstein ’03, a former Collective resident, remembers Penniman chopping wood with her newborn daughter Nashima in a belly pouch — the house’s only heat source was a wood stove.

“She inspired me and lots of other students. They continue to inspire us,” says Feinstein. He is purchasing a piece of land with his partner to create a farm of his own.

After several years of post-graduate activism, teaching and communal living in Worcester, Leah and Jonah moved their young family, which now included infant son Emet, to Albany, N.Y., in July 2005. Jonah started a construction company, Hudson Valley Natural Building, and Leah founded the Harriet Tubman Democratic High School, an extension of the independent inner-city Free School. It opened in September 2005 with 40 students and three teachers, with Penniman as director.

They lived in Albany’s South End, a low-income neighborhood in this capital city of 100,000 people.  There, they found it was easier to acquire weapons and drugs than healthy food, and they decided to take action. In 2007, they purchased 72 acres of woods and fields in the rural hill town of Grafton, about 45 minutes from Albany. Soul Fire Farm was born.

It would take four years to get the desolate property ready for farming. But by 2010, Vitale-Wolff had designed and built an energy-efficient house for the family. The building was framed without nails and insulated with dried straw bales sealed with lime and clay. That year, the family left Albany to live at Soul Fire full time and bring the bounty back to the Albany community.

Vitale-Wolff devoted most of his energies to the farm, while Penniman split her time between Soul Fire and teaching. She won a coveted position at Tech Valley High School, where she taught science and took students on missions to Haiti. In 2014, she won a Fulbright fellowship to study indigenous farming practices in Oaxaca, Mexico. The family lived in Mexico for nearly half a year, and later adopted some of the thousand-year-old practices they observed for use at Soul Fire.

Earlier this year, Penniman left Tech Valley High for a part-time teaching job closer to home so she could spend more time on the farm.

Today, the family, plus interns and about a hundred volunteers, grows dozens of types of fruits and vegetables that are distributed to 80 families in poor urban neighborhoods in New York’s Capital Region.

The number of programs at Soul Fire continues to expand. This past summer, the farm hosted three sessions of the Black and Latinx Farmers Immersion Program, plus the group Undoing Racism. The latter was to help white leaders — nonprofit directors, for instance — recognize policies that might be racist without them even realizing it. Other activities include an alternative sentencing program for troubled youths, and community days where volunteers can come and work the land.

Penniman estimates Soul Fire Farm programs have reached more than 5,500 youths and adults over the past five years, with up to 93 percent of participants staying involved with gardening or farming.

“We’re not about getting people out to farms,” she says. “We’re about training the next generation of activist farmers.”

On a sunny day in early August, Soul Fire Farm had some special visitors — 32 teenagers from Worcester: black, white, Hispanic and Asian. They were members of Youth-GROW, the low-income farming program that Leah and Jonah formed 15 years earlier. It was the first time an entire YouthGROW team had visited Soul Fire.

On this trip, Penniman wasted no time. Minutes after arrival, participants were sitting in a circle, chanting: “They try to cut us down/but we gonna be all right!”

Instead of lecturing, she used games to teach. In one, she asked everyone to get up and move if they knew someone with diabetes, someone who lacked clean water or access to healthy food, someone whose ancestors had lost their land. Leah and Jonah then split the group to conduct tours. Their son Emet, now 11, did much of the talking.

Later, the teens formed groups and acted out historical anecdotes on such topics as the advent of sharecropping and the historical racism of USDA farm loans.

“I never paid attention to the label of a food package,” said David Peal, 16, a Youth-GROW member. Working on a farm, he said, would “change the way I eat.”

Five hours after the group arrived, the teens boarded a yellow school bus headed home. Before the sound of crunching gravel had faded away, Leah Penniman was already on the way to her office to make a phone call. The day was far from over, and there was plenty more to be done at Soul Fire Farm.

Monica Sager ’21 writes her own story