Monica Sager ’21 writes her own story 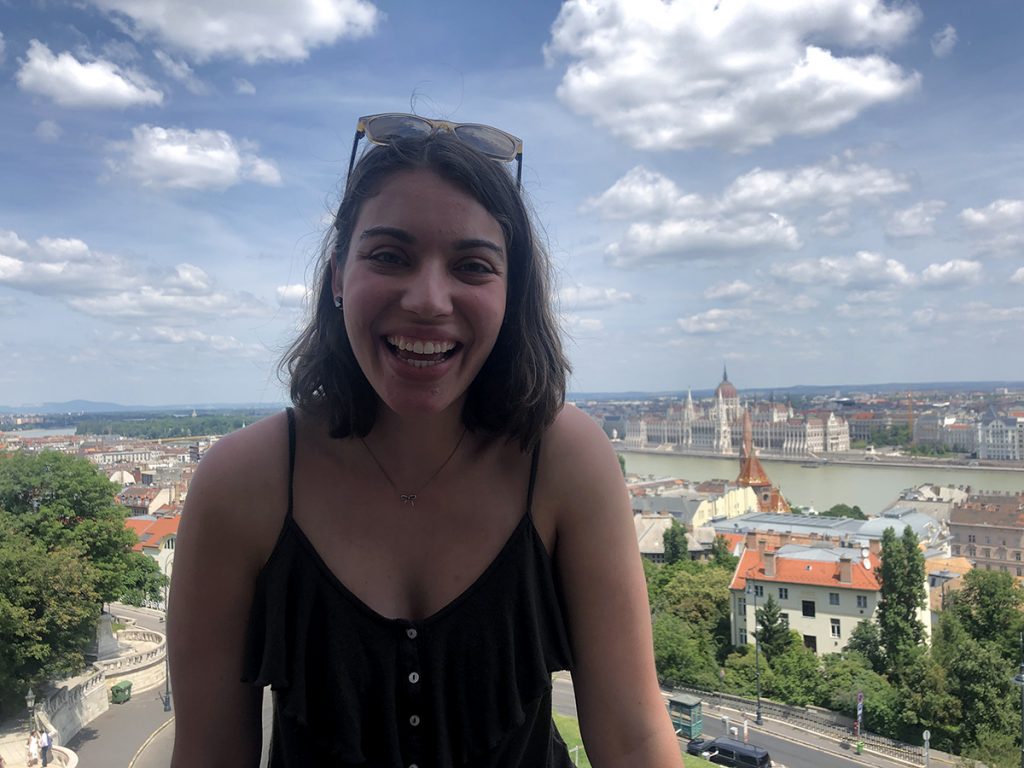 When the COVID-19 pandemic sent Monica Sager ’21 home early from her semester in Washington, D.C., she continued to do what she does best — report the news around her.

A self-designed major in journalism, with a second major in psychology, Sager created a podcast about her hometown of Pottstown, Pennsylvania, interviewing teachers, farmers, public safety officials, and business owners about how their lives have changed in the wake of the virus. “I got the idea to start my podcast, ‘Pottstown Voices,’ a few weeks ago to show that we’re all in this pandemic together,” she says. “I’m able to have a wide range of different voices.”

Today, Sager has posted 10 episodes on SoundCloud, with a new episode going live every few days, on average. She conducts and records each interview over the phone and promotes the show via social media, including on dedicated Facebook and Twitter pages. Sager, who has spoken with a fitness studio owner, a land trust manager, several students, and a speech therapist, among others, says her goal is to highlight how the pandemic is affecting everyone in her community.

“A lot of the people in the beginning who I reached out to were family friends or people who I’m friendly with, but I did try to create themes around each episode, so I also reached out to specific businesses,” she says. “I also created an email address for the podcast, which a few people have used to reach out to me with their own stories.”

Sager became interested in journalism in high school after a cross-country injury left her in need of a new after-school activity. She joined the student newspaper, working as a copy editor and later as managing editor. During her senior year, she had an opportunity to visit The New York Times and Huffington Post, and realized she wanted to pursue her interest professionally.

When Sager arrived at Clark University, the English Department dissolved its concentration in journalism, but she didn’t let that stop her. Sager created her own major using six journalism courses still offered by the department, combined with two classes in London and three courses through American University’s Washington Semester Program, which she attended this spring. Sager supplemented her experience with an internship at the Worcester Telegram & Gazette.

Her goal is to one day work for The Washington Post as an investigative reporter.

“My outlook is that journalism, no matter what, is going to be needed,” she says. “Especially in today’s world with the coronavirus, inaccuracies and falsities are provoking people and making it worse.”

During her time at the Telegram, Sager got to know the Worcester community through covering numerous stories, including the temporary statewide ban of vaping products. As part of her independent-study experience, she reported extensively on homelessness in Washington, D.C.

“I know when people think of journalism, they don’t think of advocacy work, but to me, investigative journalism is almost like advocacy work,” she says. “While staying neutral, I’m able to highlight different voices and issues in the country and in society in general. I’m able to push for change.”

Although her semester in Washington, D.C., was cut short by the outbreak of COVID-19, the experience solidified Sager’s desire to one day work in the nation’s capital. She attended several free journalism events each week and had an opportunity to visit the Pulitzer Center on Crisis Reporting.

Her interest in investigative work was initially sparked by a feature investigation by Buzzfeed reporter Michelle Dean about a bizarre Missouri murder case that became the subject of the 2017 HBO documentary “Mommy Dead and Dearest.”

“It was a really long piece, but it kept my focus the whole time,” Sager recalls. “Afterward, I thought, ‘This is what I want to do.’ I just felt the impact of it. Something like that can make a big difference.”

At Clark, Sager writes for The Scarlet and is co-president of Her Campus. Next semester, she will study social psychology in Professor Ozden Ulug’s research lab. “With psychology, I’m able to bolster my journalism because I’m able to recognize why people are doing certain things,” Sager says.

After graduation, she plans to pursue a master’s degree in communication through Clark’s Accelerated B.A./Master’s Degree Program, followed by a one-year master’s program in journalism — ideally at Northwestern University.

“Clark’s faculty have been motivating me and pushing me to pursue all these different opportunities,” Sager says. “I think it’s because of them that I’ve had such a broad experience.”