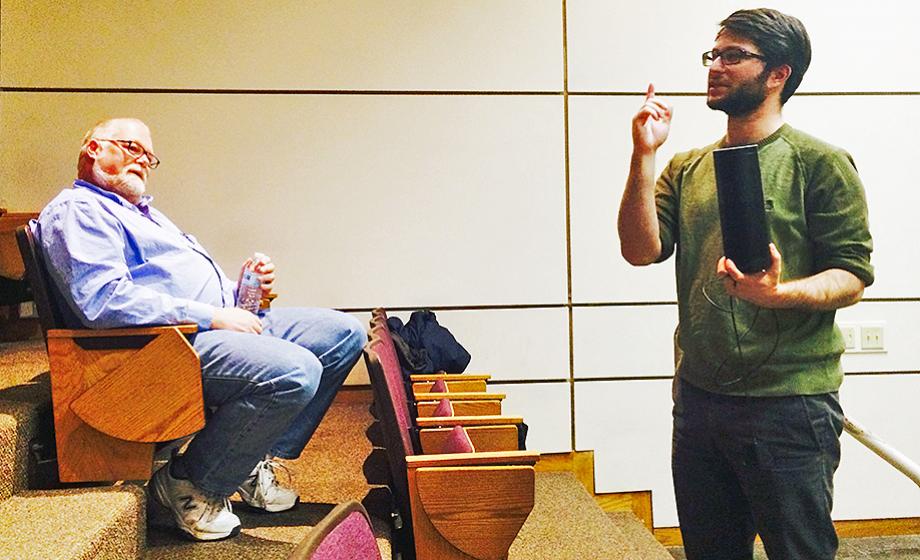 When students at more than 1,000 colleges and universities ranked the companies where they’d like to work, the top six probably drew little surprise: Google, Apple, Microsoft, Facebook, Intel and Amazon.

“This year, most of our computer science seniors have found jobs as software/web developers and IT system staff, and others are pursuing various leads,” says Li Han, associate professor of computer science. “Many ended up at companies where college students aspire to work.”

Among them: Sarjan Shrestha ’16 and Hoang Nguyen ’16 at Facebook; Lukas Leung ’16 at FedEx, touted as a “Great Place to Work”; Trish Le ’16 at Wayfair, an employer winning kudos from the Boston Business Journal (BBJ); and Son Le ’16 and Zhuoming “Colin” Tan ’16 at Intrepid, a mobile design and development company that also landed on BBJ’s “Best Places to Work” list.

Zhizhimontova, a software development engineer, has become a virtual “poster child” for Amazon, appearing in Facebook and LinkedIn ads to recruit prospective employees. During her 2013 internship, she worked on a top-secret project that later was revealed to be the Amazon Fire Phone. The Facebook and LinkedIn ad introduce her this way: “She spends her days working on Alexa for Fire TV – the same Alexa that powers Echo – with a beautiful UI [user interface] and visual interactions. She likes to take breaks to play foosball and hang out with her teammates’ dogs.” The ads also quote Zhizhimontova: “Knowing that millions of people are using your code every day and care enough about the product to provide meaningful feedback is an empowering feeling.”

High-paying jobs at Amazon, Facebook and other top companies can be a real draw for students right out of college. But some still commit themselves to graduate school. Here, too, recent Clark graduates have had success, landing at top-ranked programs, according to Han.

In 2014, Hoang Duong Trong ’14, a math major, secured a fellowship and entered the doctoral statistics program at University of California, Berkeley. Evan Palmer ’14, a double major in computer science and physics, won admittance to the master’s program in computer science at Carnegie Mellon University. Now a graduate, Palmer starts a job at Google this summer.

“We are very happy that our students are doing so well,” Han says.

Over the years, alumni have returned to campus to share how their Clark education has benefited them in graduate school or the workplace.

Watching from the audience was Kenneth Basye, a visiting faculty member in computer science at Clark. During the Echo project, Kramer worked with Basye, then a software development manager at Amazon, on an “automatic speech recognition engine” team, which developed Alexa.

Kramer almost ended up in graduate school right out of college, he said, but when Amazon called in 2012, he took the job because “the things I wanted to pursue were in industry: applying computer science to products you can see and use.”

Research played a huge role on the speech recognition team where Kramer worked. With Basye, he researched “a novel algorithm for speeding up our speech recognition without degrading the accuracy of the results. My research led to a pending patent submission, which was quite exciting.”

Working with researchers was a valuable experience in learning how to better communicate on a cross-functional team, he said.

“The hardest part is translating what the researchers mean into engineering because we speak different languages,” Kramer recalled. “The liberal arts education I received at Clark was useful because a very, very important aspect of engineering is how to communicate your ideas.”

After working at Amazon for almost four years, he recently took a job as a senior software engineer at the Cambridge, Massachusetts-based HubSpot. The marketing software company, it turns out, has consistently landed on “Best Places to Work in Boston” lists, most recently besting Facebook, Google and Apple on Glassdoor’s list.

“I learned an incredible amount from my time at Amazon. I was fortunate to be surrounded by extremely intelligent engineers and managers, including Ken Basye. From my teammates I learned how to successfully build large complex software projects,” Kramer said. “My previous team had mature software that was working well and being used by quite possibly millions of people.”

At HubSpot, he’s getting the chance to work on a project “from the ground up” – and “ultimately influence the direction and success of the product.”

“My new team currently consists of just me and a technical lead,” he said. “Our broad mission is to prevent HubSpot’s users from using HubSpot’s email service in an abusive manner, such as sending spam.”

The perks aren’t bad, either: a full-time barista and craft beers on tap, Kramer said. “But the most important part of the company culture is that everyone buys into making the workplace as fun and stress-free as possible.”