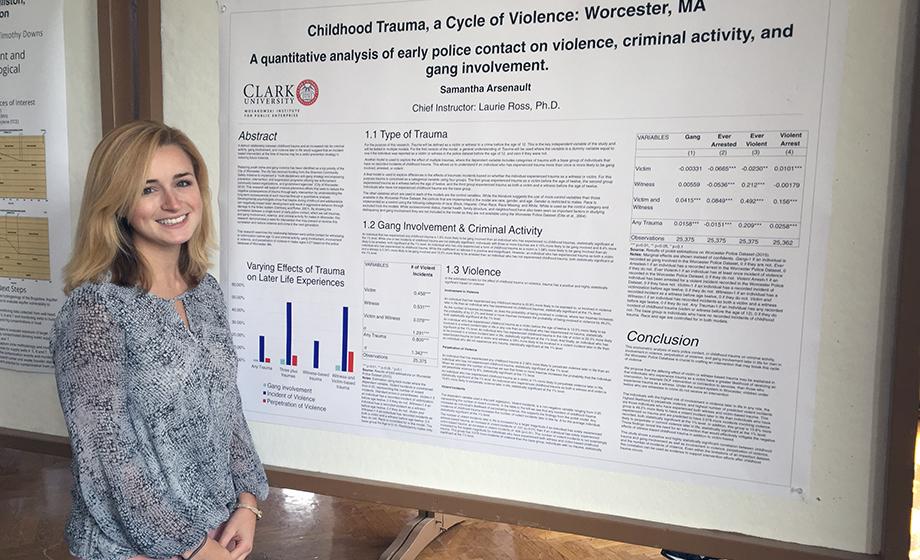 Just months after graduating from Clark, Samantha Arsenault ’15 found a way to put her economics degree to good use. She conducted research with Associate Professor Laurie Ross to examine a daunting community problem: whether boys who witness or are victims of crimes in childhood may later be drawn to violence, criminal activity and gangs.

“I was able to take what I learned as an undergraduate – quantitative analysis and data sets – and put it to use in another field,” said Arsenault (pictured above), who is pursuing a master’s degree in community development and planning and working as a graduate research assistant for Clark’s Mosakowski Institute for Public Enterprise. “That’s the goal of the Mosakowski Institute: to get research into practice, and that’s what I’ve tried to adopt in my own work.”

Arsenault’s interdisciplinary presentation was one of nearly 70 research projects on display at the 14thannual Graduate Student Multidisciplinary Conference at Clark on April 6. The Graduate Student Council organized the eight-hour event, which featured a luncheon, oral and poster presentations and a reception and awards ceremony in Higgins University Center.

In remarks before the lunchtime crowd, President David P. Angel said the conference offers a “taste of the diversity of scholarship” in Clark’s nine doctoral programs and 17 master’s degrees, representing a “significant accomplishment and a point of pride for the University,” he said. In reviewing the students’ abstracts, Angel noted, he found not the “isolating experience” sometimes described by researchers but instead a sense of joy, passion and “hope that your work brings when you take on some of the challenges of our society.”

Graduate students at Clark have the opportunity to work across disciplines, Angel continued, and to build “a community of shared interests, a community that is extended beyond our own campus doors to the communities of which you are a part.”

In the afternoon poster and oral presentations, graduate students showcased and discussed a range of scholarship, much of which extends out into the broader community and world.

For instance, Arsenault’s quantitative analysis of data from the Worcester police could be used by Clark’s community partners to find ways to intervene earlier in the lives of boys who both experience and witness trauma, a way to “break the cycle of violence,” she explains.

For Arsenault, there’s an added bonus to her research: As part of her tuition-free accelerated master’s degree – a special fifth-year program offered to qualified undergraduate students at Clark – she’s gaining the experience she’ll need when applying for jobs this spring. She graduates in May.

Other examples of graduate research at the conference: