Michael Swartz discovered his passion for art as a child.

“I’ll never forget sitting at the kitchen table as a kid and my mom drawing pictures with me. I would just be blown away by what she could do, and that translated to me being interested in art as an adult,” he recalls.

But when Swartz told a high school art teacher that he loved to draw people, she responded, “Michael, you’ll never make any money doing that.” The exchange steered Swartz to graphic design and typography, and, later, toward animation and 3D art. 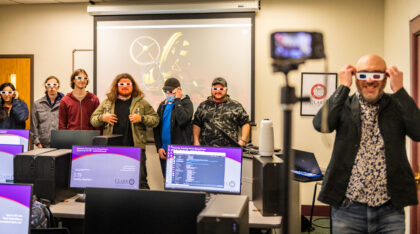 Today, the professor in Clark’s Becker School of Design & Technology wants to strengthen the technical expertise of the BSDT program through new classes in rigging and animation, and projects like the animated bee shown above.

“The thing I’m most excited to see is how our program embraces all these new changes in the industry. Whether it’s virtual production, A.I., or any emerging technology, it’s thrilling to be working at the No. 3 gaming program in the world,” he says, citing the Princeton Review ranking of the game design program. “That’s something that students and faculty should be proud of. People have worked very hard to make this program what it is and I’m excited to continue that and grow and learn.”

Swartz received a bachelor of fine arts in graphic design at Plymouth State University and a master of fine arts in computer art at the School of Visual Arts in New York City. He worked in advertising for several years until he saw the Brad Pitt film “Fight Club.” He was struck by the film’s visual effects, and when he discovered they were made on a computer it was such an epiphany for Swartz that he switched careers to 3D art and animation.

Through his company Meshfolk, Swartz served as the lead computer graphics artist and creative director for projects commissioned by companies such as Schick razors and Breyers ice cream. He created interactive websites and 3D models that were later adapted into company brands.

“When you have an experience of creating something and then seeing it alive and moving, it’s kind of life transformative,” Swartz says.

He soon realized peers were using many of the same special effects tools in feature films and TV to make video games. His first step into game-making was designing a space shuttle with an animated launch for a co-worker’s game, Mech-Warrior Living Legends.

“I’ve always enjoyed playing games since I was a kid, so it was a natural shift,” Swartz says.

Swartz, who previously taught at UMass Dartmouth and Northeastern University, says his passion for learning is fueled by partnerships with his peers and students, and his greatest collaborations have been ones created across disciplines.

“Black Spaces Matter” was a project Swartz worked on with historian Pamela Karimi at UMass Dartmouth. Swartz created a virtual tour of Abolition Row in New Bedford, Massachusetts, an interracial neighborhood that was home to abolitionists and became a focal point of the local anti-slavery movement. The exhibit allowed the New Bedford Historical Society, city residents, and students and faculty from UMass Dartmouth to tell the story of this little-known neighborhood.

“It was such an interesting and fulfilling project,” Swartz says. “I would never have had that opportunity if I hadn’t branched out of my comfort zone in my field.”

The opportunities for these kinds of interdisciplinary collaborations will be enhanced when Clark’s Center for Media Arts, Computing, and Design is complete next year, he says, creating a permanent home for the BSDT program on the main campus. The new building will be home to the BSDT, Computer Science, and some programs in Visual and Performing Arts.

“It’s going to be tremendously helpful to have everyone in the same place,” Swartz says.

Outside of the classroom, Swartz explores his creativity through different mediums. He’s working on an album in his home studio, where he plays acoustic guitar, and is publishing a poetry book next year.

Swartz is also an avid 3D printer and recently discovered the art of lost-wax bronze casting.