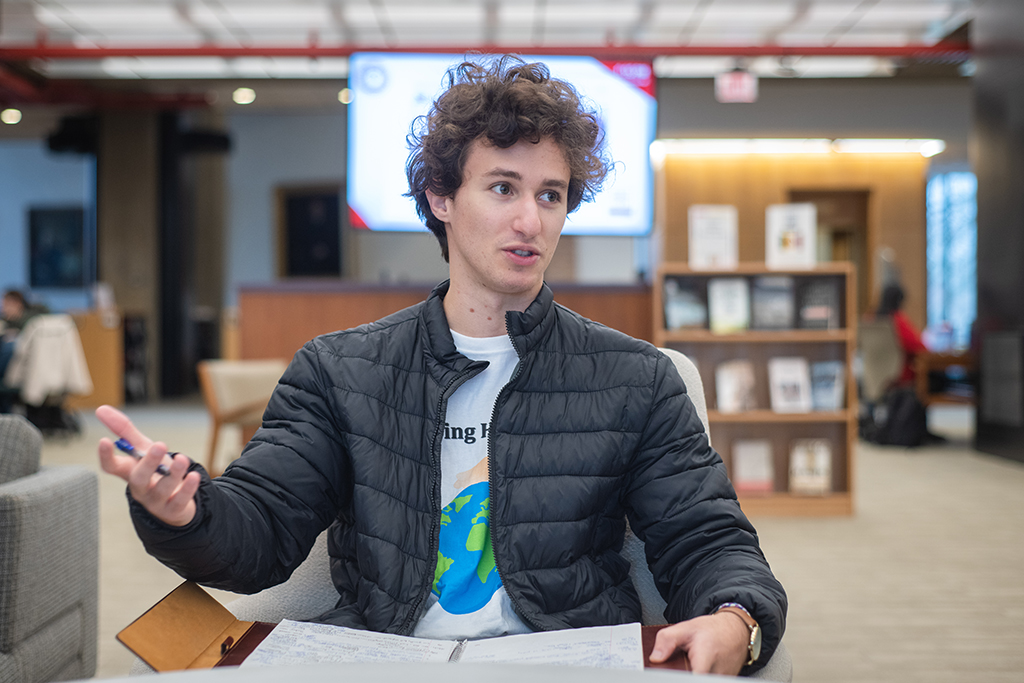 Amid the early COVID lockdown, Jonathan Tamen ’26 decided to take decisive action to help others, both in the U.S. and across the globe.

In March 2020, Jonathan and his twin brother, David, started a nonprofit organization called Helping Hands MB at their high school in Miami Beach, Florida. The 24-member group’s mission is two-fold: to harness 3D printing technology to provide prosthetic limbs to children who have lost a hand or fingers, and to provide and promote STEM education opportunities for students who might not have access to them.

The prosthetics project was undertaken with some help. Helping Hands MB partners with e-NABLE, an online global organization of “digital humanitarian” volunteers who use 3D printers to “make free and low-cost prosthetic upper limb devices for children and adults who were born missing their fingers and hands or who have lost them due to war, natural disaster, illness or accidents.”According to Tamen, e-NABLE technicians design the prosthetic limbs, then certify and train volunteers on how to make them. To date, Helping Hands members have fashioned 14 prosthetic limbs — the components of each limb take about 30 to 40 hours to print and another 10 hours to assemble. David, an engineering student at Boston University who is certified by e-NABLE, oversees the technical process, and Jonathan coordinates the distribution of the limbs to recipients.

“We’ve made a few different sizes of hands,” Jonathan says. Recipients are fitted for the prosthetic devices, which typically extend from the upper arm through the hand. When the elbow is bent, the fingers can grip objects, such as a water bottle, utensil, or writing implement.

Some of the limbs are constructed with artistic — even superheroic — flair. It’s not uncommon for a child to request a hand in the aesthetic of a comic book character like Iron Man or Spider-Man. “We worked with a boy in Miami on a special hand that’s modeled after Captain America,” Tamen notes.

Helping Hands MB has partnered with Food for the Poor, a Florida nonprofit, to distribute eight prosthetics to a hospital in Haiti; six other limbs have gone to recipients in the U.S.

Tamen is equally passionate about Helping Hands’ efforts to “expand STEM education for younger students of all ages and show how those STEM skills can be used for the good of humanity and to change lives.”

His own interest in this work traces back to his freshman year of high school, when, as a member of the robotics club, he organized a program that allowed the club to visit Biscayne Beach Elementary School, which has no introductory programming or coding class.

“We were able to teach them, with LEGOs, how to design robots and program them at a basic level,” he recalls. “The practical application of these skills was to design a city that would be more accessible for the handicapped, or more resistant to climate change. We used robotics, engineering, and coding to design a city of the future.”

The organization also held workshops for students at Miami Beach High School to learn 3D design and printing, and the assembly of printed parts.

Tamen, who is president of Helping Hands MB, is in charge of organizing, team-building, and administering STEM education programs. He envisions the organization expanding to other high schools and universities and sees Clark as a place where he can connect with students who would be interested in STEM education for youth. He notes that two brothers have reached out to him from London to start their own Helping Hands chapter; meanwhile, members of his original team are currently in their first semesters of college, launching chapters at their schools.

Tamen learned about Clark from his mother, who grew up in Worcester. He was drawn to the university because of its “strong geography program, small campus, open curriculum, and a community that cares about helping others and building each other up.” He plans to major in geography and pursue the fifth-year accelerated master’s program in community development and planning, with an eye toward a career in local government.

“One of the issues I care a lot about is food insecurity, and from some of the research I’ve done, I can see that a lot of the issues that perpetuate that problem exist at the local level,” he says. “It has to do with how we design our communities and how they interact.”

Tamen has registered for Clark’s entrepreneurship competition, Clark Tank, through which he hopes to make his pitch for resources to grow Helping Hands MB. “I would use the grant to invest in supplies, recruit members into a club on campus, and organize projects in local public schools to teach those students STEM skills — and how those skills can be used to change lives.”