When Adam Keyes took on the role of director of COVID testing and operations in 2020, he was assured those duties would consume roughly 30 percent of his time. 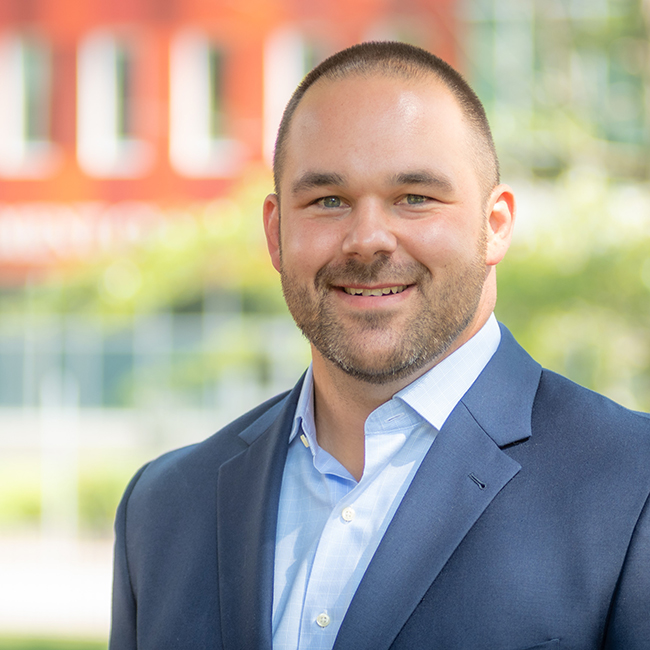 “We quickly learned that we’d underestimated what was needed for a testing operation that ran seven days a week, 12 hours a day, both in time and infrastructure,” he says with a laugh.

The full-fledged testing operation that Keyes established in the Kneller Athletic Center — one that once saw him spend 19 straight days at the Kneller — became a cornerstone of Clark’s efforts to mitigate COVID risks on campus and was a signature accomplishment of his eight-year Clark career. On Friday, that career comes to a close, as Keyes departs Clark to become vice president of student success and campus life at Dean College in Franklin, Massachusetts.

Keyes was working as senior associate dean of students and deputy Title IX coordinator when COVID hit in spring 2020, prompting the closing of campus. As the virus swept over the globe, Clark mobilized across departments to develop protocols and procedures that would allow for classes to be taught, food to be served, and the business of the University to continue in the fall. Those who were on campus during those early days of COVID will recall the mandatory wearing of masks both indoors and outdoors, the attention paid to keeping surfaces sanitized, and specific rules applied to everything from dining to traffic patterns through campus buildings.

Critical to the campus response was the development of a mandatory testing protocol for students, staff, and faculty, which required the establishment of a full-fledged testing operation inside the only space large enough to accommodate it: the Kneller Athletic Center.

“It became obvious that very few people had the structural answers about running an operation there,” Keyes recalls. “The idea was brought to me, and I said I’d be willing to do it.”

Keyes — along with David Chearo, vice president for planning and chief of staff, and Joe Kalinowski, vice president for information technology services — visited the testing operation at UMass Chan Medical School to glean best practices. “We copied elements but scaled them to a residential, high-volume student population,” Keyes recalls. The goal was to operate a testing center that not only served the Clark population with efficiency, but which could be sustainable if the virus persisted for an extended period of time.

In August 2020, Clark’s Testing Center opened, with 12 testing stations inside the Kneller occupying the majority of the gym. Volunteers from the campus community worked in shifts to help register testees, and health care aides were hired to ensure that nasal swabbing was conducted appropriately. The Broad Institute in Cambridge was contracted to process and post test results.

“David Chearo, Joe Kalinowski, and I jumped on board with the idea of sharing shifts in the Kneller because we realized only a few of us knew how to run everything, and someone had to be there if anything went wrong. I do remember spending a lot of time at a small round table in a corner of the Kneller,” Keyes recalls. “Some faculty and staff eventually joined us in that workspace, and many student workers also stepped in to work in-person shifts . All of these individual contributions were incredibly helpful in making the testing center functional for everyone.”

Over time, Keyes and team were able to streamline the operation and hire graduate and upperclass students into leadership roles at the testing center, eventually reducing its scope within the Kneller, then moving it into the Grace and Lurie conference rooms before institutional testing was finally discontinued at the end of the last academic year.

Since February 2021, Keyes has applied his talent for project management as the University’s director of strategic initiatives, working to ensure the success of a broad range of initiatives that are of high priority and strategic importance to Clark. Now he’s excited to return to student life, the area of higher education about which he’s always been most passionate.

“I appreciate all the opportunities I’ve had at Clark,” he says. “As much as I’ve enjoyed this role, it’s time to get back to what I’ve always loved.”