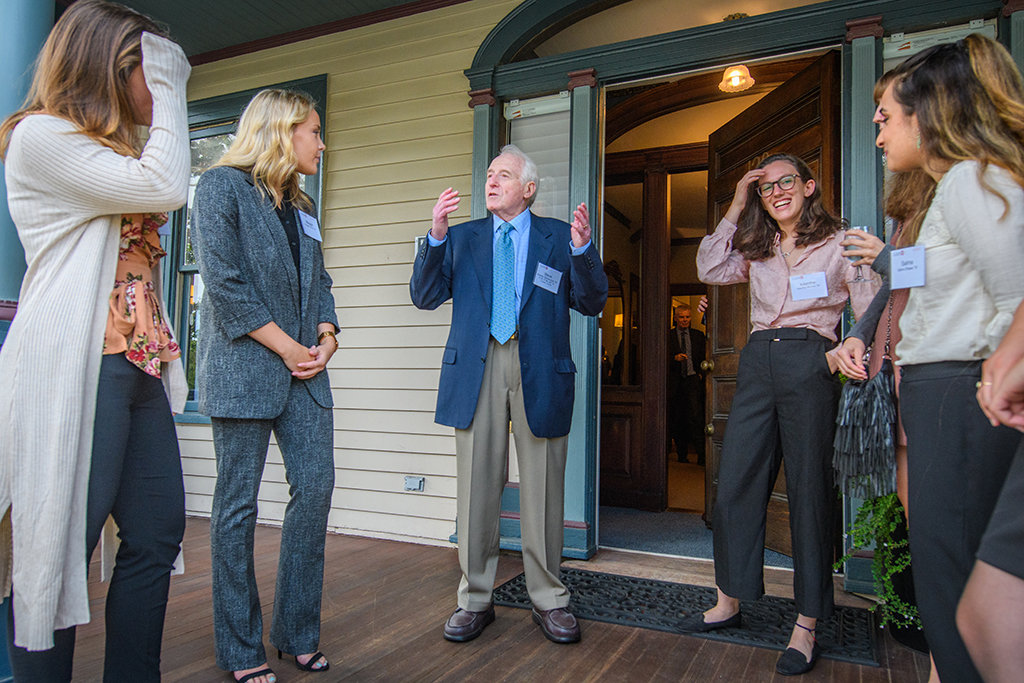 Of the things that truly made Stephen Steinbrecher ’55 proud, family was first — and Clark University wasn’t far behind.

In 2005, Stephen merged his two passions when he and his late wife Phyllis, with daughters Laura Steinbrecher and Marcy Puklin ’80, P ’10, endowed the Steinbrecher Fellowship Program in honor of their late son and brother, David C. Steinbrecher ’81. The gift allows five to seven Clark undergraduates a year to pursue original ideas, creative research, public service, or enrichment projects across the globe, producing the types of outcomes that result when inspiration meets opportunity.

The enduring contribution of Stephen Steinbrecher to the students of his beloved alma mater was remembered this week following news of his passing on Tuesday, October 18.

“Year after year, Steve Steinbrecher empowered a group of Clark students to do the kind of independent research that allowed them to push the boundaries of their passions. That’s a rare gift,” says Clark President David Fithian. “His generosity and devotion to Clark were crystallized each fall when the Steinbrecher fellows would present the results of their research to Steve and other invited guests at a special dinner. Their poise and confidence, and intellectual daring, made him tremendously proud. He was their greatest champion, and each rose to the occasion and flourished by virtue of having such a champion.”

He relished learning about the subjects that the students tackled. Among their many projects, Steinbrecher fellows have sought solutions to food insecurity in Chile, created a documentary chronicling the lives of Brazilian immigrants in Massachusetts, interviewed Holocaust survivors on the complicated topic of forgiveness, researched the effects of extreme poverty on a Sioux reservation in South Dakota, and investigated the impact of human activity on the microbial communities of the renowned Walden Pond. “My goal is to continue to plant Clark at the forefront of independent study and learning,” he said.

“Stephen was a legend — kind, passionate, and he set the bar high,” says Professor Nancy Budwig, director of the Steinbrecher Fellowship program. “Hardly a week goes by where I don’t hear a new tale of how he transformed the lives of our students and alums. He had a great understanding of the vision and power of undergraduate research and experiential learning long before it was a thing. And he had a deep understanding of the role research universities can and should play in the learning of our undergraduates.”

In conversation, Steinbrecher would recount his student years at Clark. He and Phyllis were married his senior year and moved into an apartment on Gates Street, across from the campus. (In a whirlwind week, Stephen took his finals, got married on Saturday, and rushed home Sunday to check if his grades had been delivered to his mailbox in Jonas Clark Hall.) An active alumnus, he served three terms as a Clark trustee from 1981 to 1995. He received Clark’s highest alumni honor, the Distinguished Service Award, in 1998.

He was exceedingly proud to be the standard bearer of three generations of Clarkies when his granddaughter, Rachel, graduated in 2010.

Sharon Krefetz, retired professor and former longtime director of the Steinbrecher Fellowship Program, recalls how Steinbrecher avidly followed the accomplishments of the students, even keeping in touch with some of them long after they’d graduated. It was his idea to form the Steinbrecher Fellows Society, which included reunions of former fellows who returned to campus to provide updates on their lives and careers.

“You could see the glow in Stephen’s eyes anytime a student would share their research or when an alum would describe how their Steinbrecher project influenced what they were doing in the world, whether as scientists, community leaders, or artists,” Krefetz says. “He cared so much about the continuing impact this work had on them, and it’s amazing how much gratitude and appreciation he received in return over the years.”

“Stephen always impressed me with his excitement for people’s projects and his love of learning,” says Tomczik, who, for his Steinbrecher project, retraced “On the Road” author Jack Kerouac’s journey from Lowell, Mass., to San Francisco and documented how the country had changed during the intervening decades. Tomczik now works as assistant county attorney at the Hennepin County Attorney’s Office in Minneapolis.

“Stephen and I remained in contact throughout the next 16 years, with letters and phone calls and events at Clark. My fellowship in 2005 was a major milestone in my life, and I’m so grateful for Stephen’s generosity to continue funding other Clarkies on their own intellectual adventures.”

At Steinbrecher Fellows events, Stephen always took the opportunity to talk about David, whom he described as a “fearless thinker” with a boundless curiosity and cheeky sense of humor. Stephen found the idea of students doing important research under David’s banner to be the perfect match.

“David was everything all you Clarkies are,” Stephen Steinbrecher told a group of former fellows at a 2013 reunion. He described his feelings on the occasion with the Yiddish word “kvell.” “It’s an old expression,” he said with a smile, “and it means ‘bursting with joy.’”

Gifts in memory of Stephen Steinbrecher ’55 can be made online or by mailing a check to Clark University, University Advancement, 950 Main St., Worcester, MA 01610. In the memo line of the check, please note: David C. Steinbrecher ’81 Undergraduate Fellowship Program.