How do you make a robot swim? Magnets help.

Ruby Krasnow ’24 knows all about oysters, and it’s not from eating them at a dinner table.

The biology major has been testing three methods of oyster cultivation under different environmental conditions to determine impacts on oyster mortality, growth, appearance, and biofouling, which refers to the unwanted growth of other organisms, like algae, on the oysters. She’s collected the height, weight, and ratio of shell dimensions from more than 6,000 oysters to assess the relationships between environment, grow-out method, and oyster performance.

Her research will be among dozens of student projects on display during ClarkFEST on Friday, Oct. 21, from noon to 4:30 p.m.

“I am especially drawn to oyster aquaculture because of the tremendous role that oysters can have in remediating water quality, restoring ecosystems, and supporting biodiversity,” says Krasnow, whose research sponsor is Professor Deborah Robertson. “Beyond the ecological benefits, oyster aquaculture can also help diversify the economies of fishing-based coastal communities, increasing their resilience to climate-related disruptions.”

ClarkFEST, formerly known as Fall Fest and Academic Spree Day, celebrates undergraduate research and creative projects and recognizes faculty and staff mentorships. It’s envisioned as an opportunity for all departments to exchange ideas. 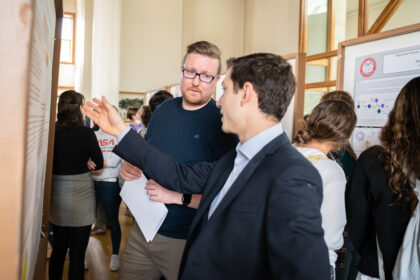 Students will share their research with poster displays, oral presentations, panel discussions, and interactive media exhibits. Presentations will be held in the Academic Commons, Prouty and Fuller Conference Rooms in Goddard Library, and the Grace and Lurie Conference Rooms in Higgins University Center. Some students are also showing their work online via Zoom.

Robots are at the core of research by physics majors Max Moss ’23 and Balaram Desai ’24. The two investigated the locomotion of magneto-elastic robots, which are made to emulate the movement patterns of a worm. Moss and Desai conducted tests with different variables to better understand what makes the robot swim. An oscillating magnetic field generated by a Helmholtz coil allows the robot to swim or crawl through different mediums. They learned that as the worm swims through hydrogels, it reduces friction on the tail, allowing the worm to oscillate and create forward propulsion.

“We were inspired to do this research because we’re very interested in fluid mechanics, and this research allowed us to explore that interest with a very hands-on approach,” Moss says. Their project is a Maurine H. Milburn Summer Research Fellowship sponsored by Professor Arshad Kudrolli.

When Nora Rueffer ’24, a double major in art history and studio art, was volunteering with the Literacy Volunteers of Greater Worcester, she noticed there weren’t many resources for English learners to discover more about public art in Worcester. She was inspired to create “Worcester Public art for ESL students,” a booklet with accompanying worksheets that introduces some of the city’s iconic public art installations to English learners. The booklet includes descriptions and histories of six Worcester artworks with technical terms or difficult words emphasized in bold and explained in the glossary. During her research, she learned that Worcester’s “turtle boy” statue likely features a faun rather than a boy.

“I wanted to make something for learners and educators. Now I understand how difficult it is to write clearly and simply, and express complex ideas without using overly technical language or complicated sentences,” she says. Rueffer’s work is part of her Steinbrecher Fellowship and was sponsored by Professor Kristina Wilson.

Lucas Oliveira-Chace ’23 and Ronald Anthony ’24, students in the Becker School of Design & Technology, are showing their virtual reality game during ClarkFEST. Players get to explore animal empathy by playing in the form of various animals and exploring a suburban environment. Professor Terrasa Ulm sponsored the project with help from Mengliu Lu ’22, MFA ’23.

“Artwork is an often-overlooked part of game design,” Oliveira-Chace says. “To most users, things look either bad or good, but from the development side, it’s humbling to see how much work the teams put into every little detail.”

This game differs from other BSDT projects because it is simply for fun, with no overarching storyline or objective.

“I have always enjoyed playing video games, and it’s a very fulfilling experience to build them from the ground up with a group of like-minded peers,” Oliveira-Chace says.