As we move from group play to parallel play, from collective leisure activities to individual ones, with our heads bent over our phones, we lose opportunities to connect with and come to trust strangers — the strangers on whom the robustness of our democracy depends.
By Valerie Sperling and Justin Shaw 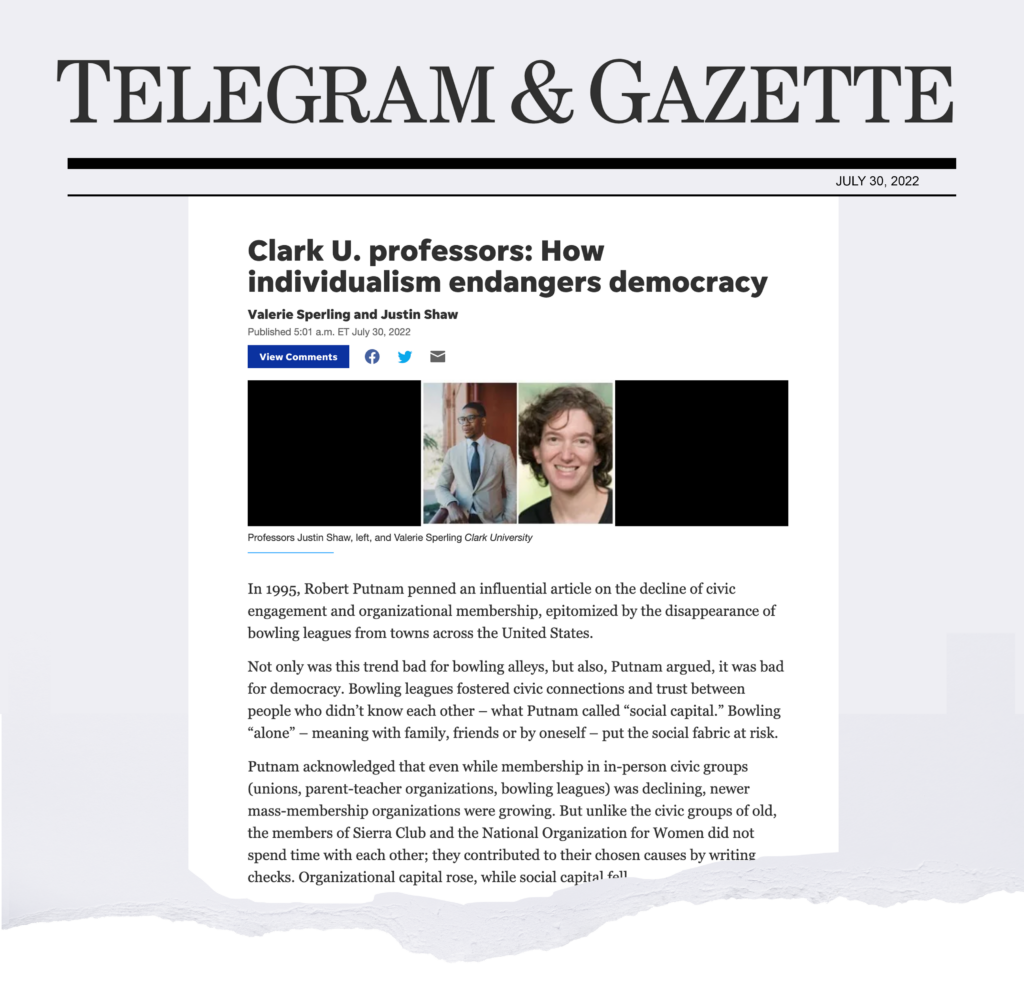 The following op-ed appeared in the Worcester Telegram & Gazette on July 30, 2022, and is reprinted with permission.

In 1995, Robert Putnam penned an influential article on the decline of civic engagement and organizational membership, epitomized by the disappearance of bowling leagues from towns across the United States.

Not only was this trend bad for bowling alleys, but also, Putnam argued, it was bad for democracy.

Bowling leagues fostered civic connections and trust between people who didn’t know each other – what Putnam called “social capital.” Bowling “alone” — meaning with family, friends or by oneself — put the social fabric at risk.

Putnam acknowledged that even while membership in in-person civic groups (unions, parent-teacher organizations, bowling leagues) was declining, newer mass-membership organizations were growing. But unlike the civic groups of old, the members of Sierra Club and the National Organization for Women did not spend time with each other; they contributed to their chosen causes by writing checks. Organizational capital rose, while social capital fell.

In the years since Putnam’s attention to the democratic bowling dilemma, everyday technology has changed dramatically. Most adults, adolescents and children are rarely found more than a few feet away from a digital device. It is harder to lure people to a bowling alley or movie theater when they can play video games and watch Netflix on their couches or smartphones.

But this change is not only a move of convenience from the public sphere to the private sphere. It is a move from collective forms of behavior to solitary, even inward-facing, melancholic ones, drawing people out of civic community.

In our individual pursuits and subscriptions we are increasingly failing to commune and connect directly with other people. We have gone from playing Boggle in person, to playing Wordament online — albeit simultaneously competing with people all over the world — to playing Words with Friends (against one person at a time), to playing Wordle all on our own.

Technology is driving this shift, but so is capitalism. As data collection about our purchasing and search habits becomes more refined, companies target consumers individually on social media and during games and other smartphone pastimes with advertisements geared to our past behavior. Whether we realize it or not, the market’s invisible hands are guiding us to spend countless hours captive to our individual digital pursuits.

Opponents can talk while playing or broadcast their gameplay to far-away friends. But these opportunities for connection are fraught with anti-civic possibilities: The white supremacist gunman in Buffalo, for example, used the gaming platform Twitch to livestream his murderous hate crime.

At base, democracy is a system, to quote Philippe C. Schmitter and Terry Lynn Karl, where – among other things – regular elections occur under “conditions of bounded uncertainty.” Uncertainty means that we don’t know who will win the next election; we may sometimes be able to guess, but if election outcomes are never uncertain then it’s not a democracy. Yet that uncertainty must be “bounded” or limited. Those who lose must have reason to trust that the person or party who won won’t change the rules of the game to prevent their opponents from winning future contests.

In short, democracy relies on our ability to trust people we don’t necessarily know. And as we move from group play to parallel play, from collective leisure activities to individual ones, with our heads bent over our phones, we lose opportunities to connect with and come to trust strangers – the strangers on whom the robustness of our democracy depends.

Valerie Sperling and Justin Shaw are professors of political science and English, respectively, at Clark University.