Melvin “Mel” Rosenblatt ’53, a former longtime member of the Clark University Board of Trustees — and the namesake of the University’s Rosenblatt Room — passed away on Tuesday, July 5, in Gloucester, Massachusetts. 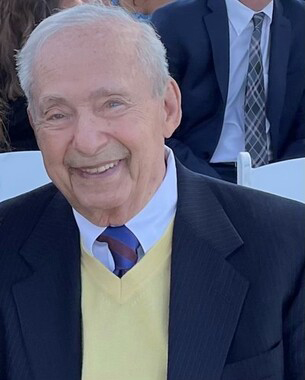 After graduating from Clark, Rosenblatt went on to an illustrious career as a CPA and business adviser in Worcester — but he remained committed to the University for 55 years. He spent 16 years as a trustee (1982–96), including three as chair, followed by ten years as an honorary trustee.

“His work ethic as a trustee was unparalleled, as evidenced by the long list of critically important and time-consuming leadership positions held by Mel,” then-Chair William Mosakowski ’76, LHD ’12, said upon Rosenblatt’s retirement from the board in 2008. “He provided great counsel and wisdom in every discussion and important decision undertaken by the Board and was instrumental in shaping much of the progress Clark has made over these past three decades “

A generous gift by Rosenblatt and his wife, Martha, in 1998 established the Martha and Melvin ’53 Rosenblatt Fund at Clark University, to be used at the president’s discretion.