Annie Jenkins closes the menu on 35 years behind the grill

Annie Jenkins spent this past Saturday doing what she’s done for the last 35 years: filling plates with eggs and hash browns, meatloaf and fries, tuna and grilled cheese sandwiches — the most comfortable of comfort foods. The only thing different about this workday was that it was her last as the owner of Annie’s Clark Brunch. Unthinkable as it may seem to her legion of Clark admirers, Annie has retired.

“I didn’t want to work 15-hour days anymore,” Jenkins says. “This was the right time for me.”

She was already considering retirement when her daughter, Megan Mancini Zawalich, who has worked for 15 years by her mother’s side, told Jenkins she wanted to pursue professional opportunities away from the restaurant.

“She said, ‘I can’t do this anymore,’ and I totally understand. This is the right move for her. I’ve always said, ‘Thank God for Megan.’ We’ve worked together for so long, I couldn’t imagine even trying to train someone to take her place.”

Once she’d made her decision, Jenkins reached out to Clark University’s administration, who she said has partnered with her every step of the way to help ease her transition into retirement.

“Clark has always been incredibly good to me, always fair,” she says. “They really took a load off my shoulders. I’m thrilled with this.” 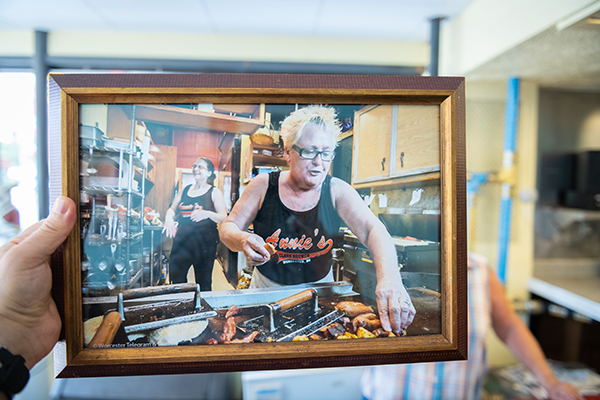 Jenkins, who first started waitressing at what was then called Wendy’s Clark Brunch in 1987 (she and her late husband, Jerry, purchased and renamed the restaurant in 1993), has every intention of remaining a presence in the Clark neighborhood.

Jenkins acknowledges that among the factors contributing to her decision to retire were the prospect of replacing aging equipment and the rising cost of food. “The price of everything is going up,” she says. “People have been telling me for years that I should raise my prices, but I’ve always kept them reasonable. You could say whatever you wanted about Annie’s, but you couldn’t say you didn’t get a good deal when you walked into the restaurant.”

As word got around about Jenkins’ retirement these past weeks, longtime customers made the pilgrimage for one last meal. In May, Clark honored her at the annual alumni dinner with a special chair that she proudly mounted in her restaurant’s front window. In presenting the gift to Jenkins, Clark President David Fithian noted, “Many colleges have neighborhood diners, but only Clark has Annie.”

Clark University is looking into options and opportunities to maintain restaurant service at the location.

“I’ll miss my Clarkies,” she says. “I’ve learned so much from them, and maybe they’ve learned something from me. Students come here and they all think they’re going to save the world, but first they’ve got to figure out how to survive in it.”

As far as an actual retirement, there’s truly no such thing for Jenkins. After taking the summer off, she expects to go back to work in some capacity. She’s also planning a major home improvement project in her Oxford, Massachusetts, farmhouse. The room she wants to redo? The kitchen, of course.

Read the profile of Annie Jenkins that appeared in the 2012 Clark magazine food issue.

Clarkies are invited to cross a cosmic sea