Taylor Laflamme ’23 initially chose to major in biochemistry and molecular biology because her favorite shows growing up were “NCIS,” “Criminal Minds,” “Bones,” and “CSI.”

“I love crime shows. Not necessarily for the thrill of finding the suspect, rather, the science behind it,” she says. “I like seeing what they do in the lab.”

Laflamme figured she’d study biochemistry at Clark and then pursue a career in forensic science. But after a few months in Professor Donald Spratt’s lab, Laflamme has found herself engrossed in cancer research.

“I never saw cancer research as something I would ever be involved in, so when I learned I could do that in the lab, I said absolutely,” Laflamme says.

Laflamme studies ankyrin repeat containing proteins, specifically Gankyrin. Gankyrin inhibits tumor suppressor protein P53 in the body, leading to enhanced cancer cell migration and tumorigenesis. When gankyrin binds to protein P53, it can cause tumors to form, and then cancer can develop. Laflamme works in coordination with Dr. Aaron Muth, a medicinal chemist at St. John’s University in New York, who creates derivatives of potential drugs that stop the binding of gankyrin to P53.

Muth sends the derivatives to Laflamme, and she uses analytical techniques to characterize the drug. She informs Muth about which aspects of the derivative are essential to prevent tumors from forming. 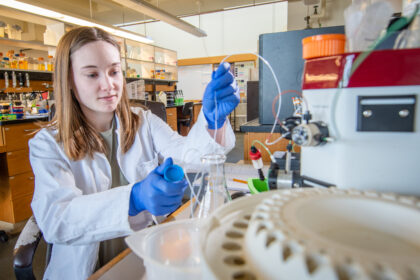 “I get all of this information and report back to him and say, ‘Don’t change this specific amino acid or this binding location because those are essential for maintaining gankyrin structure,’” Laflamme explains. “Every time he sends me one, we get a little bit closer to the molecule that we want.”

Ultimately, if gankyrin is targeted in a way that does not impact other ankyrin repeat-containing proteins, there’s potential for cancer treatment.

“I’ve had so many people in my life that cancer has touched or impacted — almost everyone does — so to say that I played a role in cancer research, even if it’s only for a few years, is really exciting,” Laflamme says.

She recalls a favorite middle school teacher who had breast cancer. Laflamme and friends from school sold bracelets to raise money to support her as she was getting treatments.

“Seeing her go through that had an impact on me as a child,” Laflamme says. “It was heartwarming to see her come back after she recovered.”

This summer, Laflamme will spend 40 hours a week working in Spratt’s lab.

“Even though it’s the biggest lab on campus, we’re still a small university so it feels like a little family,” she says.

Laflamme, who is a co-president of the Student Alumni Relations Committee, came to Clark from North Yarmouth, Maine, a small town without a single stoplight. Getting adjusted to Worcester, the second-largest city in New England, was a shock at first. Laflamme now wants to stay in Massachusetts because it is home to pharmaceutical companies like Pfizer and AbbVie and offers opportunities for a career in cancer research.