Serves as deputy administrator for US, global nuclear policy in Biden administration
By Melissa Hanson

When Corey Hinderstein ’96 first sat down at a United Nations meeting in 2015, she thought back to her Model U.N. days at Clark University.

“That was a pretty stunning career moment for me,” she recalls. “To actually sit behind the nameplate of the United States at a meeting at the United Nations and recognize it wasn’t Model U.N. anymore.” 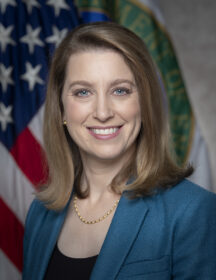 Hinderstein has experienced a number of career-defining moments since then. Last December, the U.S. Senate confirmed her to serve as deputy administrator for defense nuclear nonproliferation within the National Nuclear Security Administration (NNSA), a job that requires her attention on preventing the use or acquisition of nuclear weapons or nuclear/radioactive material by other countries or by non-state actors such as terrorist organizations. She is well-suited for this critical position, having served as senior coordinator for nuclear security and nonproliferation policy affairs at the agency from 2015 to 2017.

The NNSA has been deeply engaged in supporting Ukraine since Russia’s February invasion.

“Everything from the reckless behavior of Russia in and around nuclear facilities, in particular at the Zaporizhzhia Nuclear Power Plant and in the Chernobyl Exclusion Zone, to the Russian nuclear saber-rattling — with assertions that if the United States or NATO gets involved in certain ways that Russia might consider nuclear use — has touched on the world that I’m working in,” Hinderstein says.

“The good news, if there is any good news, is that Ukraine as a country does not have nuclear weapons,” she notes. “They gave up the weapons that they inherited as part of the breakup of the Soviet Union and NNSA removed its weapons-usable nuclear material in 2012.”

The agency has been countering misinformation as Russian forces falsely claim that Ukraine may have nuclear weapons.

“I’m particularly concerned about what lessons other countries might take in seeing a country that did the right thing and gave up nuclear weapons but now is under attack,” Hinderstein says. “The nuclear nonproliferation regime that has evolved over more than 50 years is now under great stress.”

While the war in Ukraine has been at the forefront, Hinderstein and the NNSA continue monitoring other global concerns. North Korea appears to be preparing for a nuclear weapons test, Hinderstein says. Meanwhile, the fourth anniversary of U.S. withdrawal from the Joint Comprehensive Plan of Action, commonly known as the Iran Nuclear Deal, has passed. During Hinderstein’s previous role with the NNSA in the Obama administration, she led the Iran Task Force and was deeply involved with the implementation of the deal.

“It’s extremely important that the United States do everything possible to get constraints back on the Iranian nuclear weapons program,” Hinderstein says. “We have to be clear that, even while we’re making a nuclear-exclusive deal, we’re not sacrificing other significant policy positions. I think it’s important to recognize that an imperfect deal that constrains an Iranian nuclear weapons program is better than a perfect deal that we can never get.”

The agency is also investing in advanced modeling and simulation to increase nuclear-detection capacity and address proliferation threats, Hinderstein says.

She notes that the idea of getting involved with advanced nuclear concepts would have been “mind-blowing” during her days at Clark. Hinderstein, who majored in government and international relations, credits the University with teaching her how to think through a problem and connecting her to internships that introduced her to nuclear issues.

“Clark didn’t tell me what do to, but Clark gave me the path to figure out what I could do,” she says.

Corey met Chase Hinderstein ’96 during their sophomore year and the two married in 1999. Three years ago, they created a need-based scholarship that supports a Clark student seeking to make a global contribution in their chosen field.

When she travels to Massachusetts, Hinderstein typically builds a day into her schedule to visit Worcester. Often that’s included a stop at Annie’s Clark Brunch — where her wedding photo adorns the wall — and where she reminisces about the University that helped lead her to success.