Dilasha Shrestha ’22 decided she would major in computer science while sitting at her laptop at home in Nepal and applying to colleges in the United States. That process was what she calls her “lightbulb moment.”

“I was almost 8,000 miles away from the United States and I was applying to colleges just using the internet,” she recalls. “When I got my acceptances and was leaving home, I thought, ‘I used technology to get all of this done and I’m moving across the world. All of this started with a laptop in my hand.’”

Shrestha quickly realized she could use technology to do anything. That’s what brought her to Clark and helped her secure a full-time job months before graduation. In September, Shrestha starts as an associate product manager at LinkedIn, an opportunity seized using the company’s own platform.

A recruiter reached out to Shrestha on LinkedIn and encouraged her to apply for the position. In interviews, Shrestha leveraged her experience as president of the Clark Center for Technology, Innovation, and Entrepreneurship (TIE) as well as her product management internship at GameOn, a startup out of Miami and Vancouver. She also utilized her experience as a teaching assistant in Professor Lawrence Norman’s course Marketing to You, where Shrestha learned about the power of storytelling. 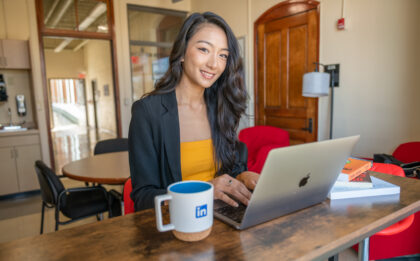 At LinkedIn, Shrestha will be responsible for overseeing products from idea to launch.

“I’m excited to be part of an organization that’s so forward-thinking and that’s helping the job market grow and evolve every day,” she says.

Shrestha didn’t step foot on Clark’s campus until a few days before she started classes. She was attracted to the University because of its small size.

“I’m someone who likes to take initiative and leadership roles. I was worried that wouldn’t be possible at a big university. Being close to professors in the classroom setting was vital to me. Coming into Clark, I think that’s the most valuable thing I’ve found,” she says. “Walking around campus and seeing so many familiar faces feels like home to me.”

Shrestha was invited to speak when Clark broke ground on the Center for Media Arts, Computing, and Design in late April. She told the audience of University and city leaders, trustees, faculty, and staff that the building will draw students from different disciplines to collaborate on projects. The center is the planned home for the Department of Computer Science, the Becker School of Design & Technology, and programs within the Department of Visual and Performing Arts.

Shrestha helped create the Innovation Hub inside the BioPhysics Building with the support of Professors Li Han and John Magee.

“Since the start of TIE four years ago, we’ve been talking about having the Innovation Hub space. We envisioned students going there to collaborate and work on side projects or startups. We want students to make their ideas come to life,” Shrestha says. “It’s a proud moment for me and the rest of the TIE eboard.”

“If you have an idea and want to make something happen on campus, it’s not that difficult because the faculty is very supportive,” she says. “I think that’s exactly what made me come to Clark and that’s what has helped me land all of these opportunities.”

That mindset easily shifts into Shrestha’s passion for computer science. With technology, ideas and products are accessible almost anywhere.

“I can make something here right now and then someone back home in Nepal could have access to it,” she says. “It’s very powerful, and that’s what draws me to technology. It can be everything and anything.”

Shrestha wants to see more women in the STEM fields.

“Coming from a male-dominated Nepalese society where so many girls are stripped of education, I consider myself fortunate to have the opportunity to come here for a bachelor’s degree in Computer Science,” she says. “At STEM events, it can be very demotivating to see the majority of people there are men. Just looking at that, women might shy away from the field because they don’t resonate with the crowd.”

Through her time at Clark, Shrestha’s confidence has grown.

“Even when I’m surrounded by people who are not women in classrooms or at conferences, I know I have the support of my faculty and the Clark community to do absolutely anything,” she says. “Any great idea I have, they’re going to support it, and that means the world to me.”