‘I intend to repay the tremendous gift of my Clark education’ 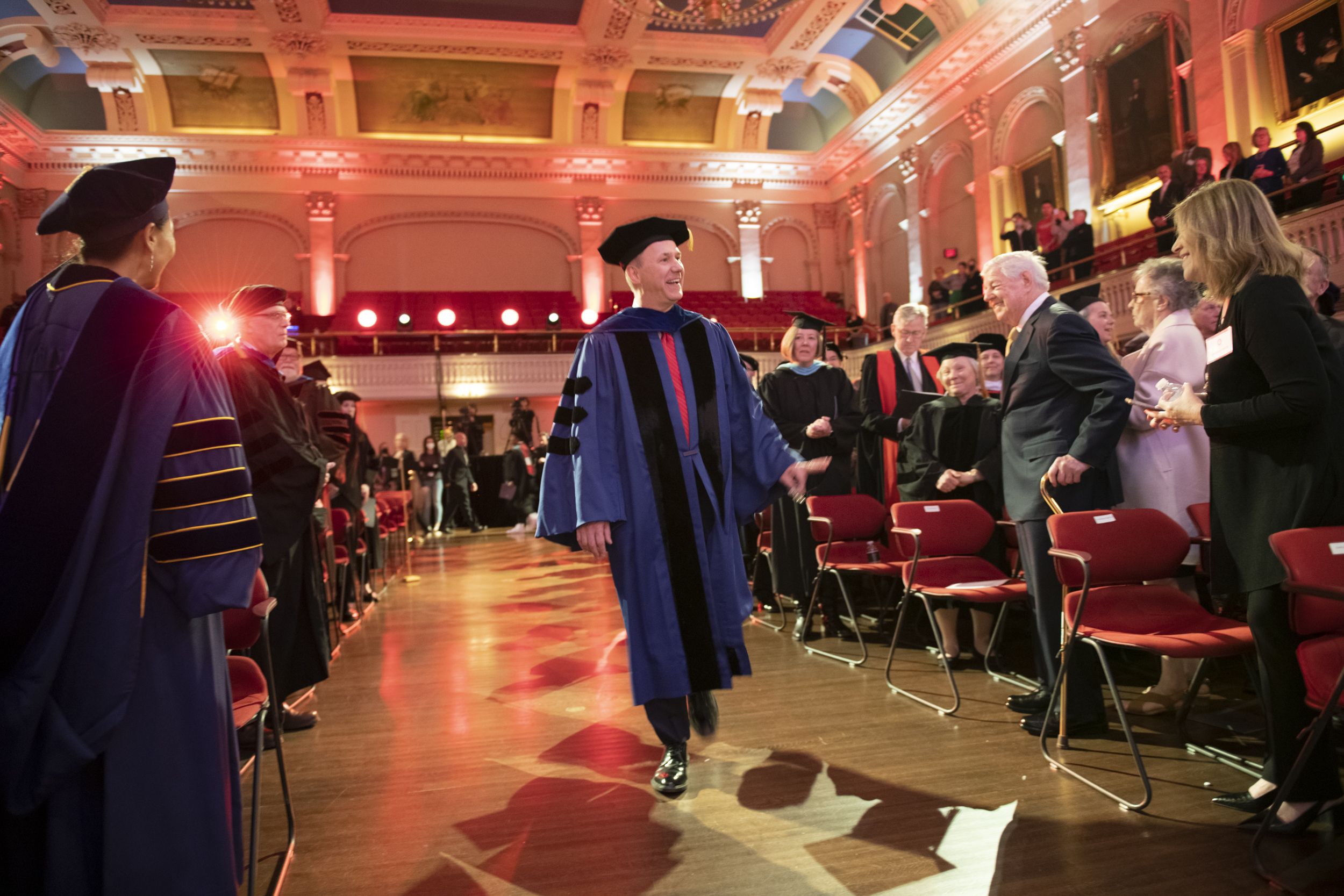 Clark University today signaled an era of new possibilities with the inauguration of David B. Fithian ’87 as the 10th president in the University’s 135-year history.

Fithian, the first Clark alumnus to hold the office of president, was invested into the position during the April 30 ceremony held in Worcester’s historic Mechanics Hall before an audience of students, faculty, staff, alumni, visiting dignitaries, and delegates from higher education institutions from across the country. Among the guests were former Clark presidents David Angel and John Bassett.

In his inaugural address, President Fithian laid out a vision for “higher altitude” — an unbounded future for the University marked by even greater academic excellence, an improved campus experience, advanced efforts toward achieving diversity, equity and inclusion, expanded outward engagement, and increased institutional capacity.

“I have no doubt that we can, indeed, achieve the vision we’ve set out for ourselves when we collectively embody these core values. We can, indeed, reach for altitude through the preservation, persistence, progress, and perpetuity of our distinctive identity as Clark University.”

Fithian reflected on Clark’s history of innovation and discovery, and on the distinctive character of its people with their “will and determination to push beyond what was known and knowable at the time.” He noted that the University traditionally exhibited a “fearlessness to assert itself when the moment arose” and is rooted in a set of shared values that have strengthened over time.

“A commitment to our institution, to each other, and to the communities we serve, along with a fierce embrace of individuality. A commitment to discovering new solutions and creating new knowledge, driven by a relentless passion to challenge the status quo and change our world for the better. A deeply held commitment to social justice and inclusive excellence, which underpins an uncompromising commitment to translating our values into action and being a more just and equitable institution.”

Fithian recalled his own student experience at Clark and how it had shaped him. “I intend to repay the tremendous gift of my Clark education by doing everything I can as president to help Clark itself reach higher, and I hope you will agree with me that that is as relevant, necessary, and essential as ever.”

Saturday’s ceremony began with a processional up Worcester’s Main Street and into Mechanics Hall, led by a bagpipe corps. It was followed by a call to order from Joseph Corazzini, vice president for government and community affairs, who emceed the event. Ross Gillman ’81, chair of the Board of Trustees, then welcomed the guests, talking about the unique opportunity to formally install a president who has been serving in the role for two years.

“We are even more enthusiastic now that we have had a chance to both work with David and to observe the truly transformational vision and infectious enthusiasm that he has brought with him,” Gillman said. “There is a palpable and unmistakable sense of possibility that will surely help us to continue to accelerate the trajectory that Clark is currently on. Indeed, the changes that we have seen are neither subtle nor limited, neither random nor impulsive, rather, they are the beginning of the ambition that David has brought to the campus and to the entire Clark community.”

Worcester Mayor Joseph Petty spoke on behalf of the city, emphasizing Clark’s close ties with Worcester and its longstanding partnership with the Main South neighborhood. He cited several of Clark’s many transformative efforts in Main South, among them the University Park Campus School, the Kilby Gardner revitalization project, and Clark’s investment in the Boys and Girls Club.

Colby College President David A. Greene, a longtime friend and former colleague at the University of Chicago, noted that “Clark shaped David in profound ways” as a student, providing him the tools to turn his intellectual curiosity into a lifetime of discovery and achievement. Fithian came to Clark “and found his North Star at the university he now leads.”

Greene introduced a video message from Robert Zimmer, president emeritus and chancellor of the University of Chicago, for whom Fithian worked as executive vice president. Zimmer said Fithian is uniquely qualified to confront the challenges facing higher education and will seize the opportunities that will make Clark an agent of change in the world. “He is a person of unshakeable integrity and of careful and nuanced judgment,” Zimmer said. “He will bring both imagination and deep values to the task before him.”

Robert Deam Tobin, chair of the faculty and Henry J. Leir Chair in Language, Literature, and Culture, delivered greetings from the faculty. He recalled his investigation into the early roots of the word “inauguration,” and the use of the word “auger” to describe the forecasting of events.

“It was striking to me that this brief meditation on the word inauguration resulted in drawing upon a wide range of scholarly disciplines from within the liberal arts and sciences that are at the heart of the mission of Clark University,” he said.

Mary Owens ’86, president of the Clark Alumni Council, noted the significance of welcoming “one of our own” into the presidency. She said that Fithian is “smartly bringing together the best of what makes Clark distinctive,” and as an alumnus he brings with him a unique understanding of the institution’s past as well as its aspirations, its successes and its shortcomings. Owens encouraged her fellow alumni to support the president’s “inspired vision” for their alma mater, adding that “the world needs Clarkies, more than ever.”

Zisser said they have enjoyed an email correspondence with Fithian over the last two years that has established a genuine and personal connection between them. “Something I learned about you, President Fithian, is when you care about something or someone you do so in a nonjudgmental and accepting way. I’ve learned from you, President Fithian, that that’s what it means to truly be a Clarkie.”

Singh recalled the speech Fithian delivered on the Clark campus in 2020 shortly after being selected president in which he described how Clark changed his life when he was a student. Three decades later, Singh said, the University continues to do the same for its students.

“As a soon-to-be Clark alumnus myself, I can safely say that this institution has gone above and beyond to provide opportunities for growth and success for its students,” Singh said. “Clark has provided me with a great college experience, molding me into an individual ready to step into the world.”

David Rubenstein, co-founder and co-chairman of The Carlyle Group, renowned philanthropist, and a friend of Fithian’s offered remarks prior to the president’s formal investiture.

Rubenstein recalled that when Fithian was executive vice president at the University of Chicago he oversaw the design and construction of a campus building that Rubenstein funded. Fithian called him weekly, he remembered, seeking guidance and feedback. It left him wondering if Fithian was always so detail-oriented and eager to consider other perspectives.

“And the answer was — yes. Everything he does, this is the way he is,” Rubenstein said. “I said, ‘This is a person that is going to be hard to hold at the University of Chicago. He clearly is going to be a university president.’

“When the Clark opportunity came along, I talked to David about it. I said, ‘Nothing is really greater in life than going back to your alma mater and helping your alma mater, because your alma mater is the place where you were formed as an adult and really went into maturity.’ If Clark is as important to you as I think it is, this is going to be the great pleasure of your life.”

Saturday’s ceremony was graced with several musical numbers including “Call to Post,” composed by Matt Malsky, the Tina Sweeney, M.A. ’49, Endowed Chair in Music and Director of the Higgins School of Humanities; “New Paths” composed and performed by Leonard Ciampa, Mechanics Hall composer-in-residence; and “The Builders,” with music by John Aylward, associate professor of music composition and theory, and sung by Cailin Marcel Manson, associate professor of practice and director of music performance, with accompaniment by Yelena Beriyeva, distinguished artist and director of chamber ensembles. The lyrics are based on the Henry Wadsworth Longfellow poem, “The Builders.

Thomas Mueller ’22 concluded the event with a soulful rendition of “Feeling Good.”

Saturday’s event was the culmination of several days of celebratory activities, including a student concert at Mechanics Hall, the groundbreaking for the new Center for Media Arts, Computing, and Design, and an Academic Symposium.