Life, and death, considered through the lens

For Stephen DiRado, professor of studio art, coping with his father’s decline and death from Alzheimer’s disease was more comfortable through the lens of his camera. The result was the photo book, “With Dad.”

For Soren Sorensen, professor of screen studies, DiRado’s photos of his father’s life, particularly in those later years, provided the narrative for a documentary film, also titled “With Dad.” Both men consider these creative works a framework to better understand aging, particularly as people are living longer.

The professors explored those concepts alongside Jeffrey Jensen Arnett, senior research scholar in psychology, and Esther Jones, associate provost and dean of the faculty, during the session “Medical Humanities: With Dad.” The April 29 discussion was part of the Academic Symposium, one of the events held to celebrate the Inauguration of President David B. Fithian.

“Somebody told me once about the layers of an onion,” DiRado said. “The fact is that when your grandparents go, one by one, those layers get thinner. How frightening it is. But you always have your mother and father who are close by and still protect you. There was a point when my father was ailing that I realized that there wasn’t much protection left and I had to rethink my role.” 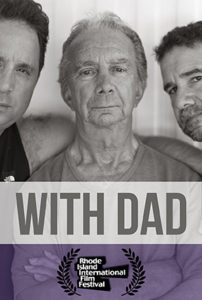 Arnett, who has spent years researching what he has coined as the “emerging adulthood” years of 18 to 29, has shifted his research to focus on adult development from ages 60 to 75.

Jones says aging comes with a paradox around identity: A greater fear of death is aligned with a younger age, research shows.

“As you age, you fear death less because you’ve had a lifetime to do stuff and to make a mark and to live meaningfully,” she said.

Sorensen said he wonders what can be done to extend the sense of self and purpose over one’s life. When he made the documentary, Sorensen was older than DiRado was when he began taking care of his father. DiRado is now in his 60s, the age at which his father started to decline.

“If you speak to Stephen, it doesn’t seem like he skips any beat,” Sorensen says. “So you do wonder, what can we do to prolong this lucidity?”

DiRado said he misses visiting the nursing home where his father spent the final stage of his life.

“To experience the end of life, the spirituality of it, was mind-blowing,” he said. “I looked forward to it week after week and year after year.”

Read about the other sessions held for the Academic Symposium, one of the events celebrating the Inauguration of President David B. Fithian: