In 2008, John Granville, M.A. ’04, was gunned down in Sudan.  A stunning admission by that country’s government has brought some solace to those he left behind.
By Jim Keogh

It was an act of violence that ended a lifetime of kindness.

In the early morning hours of January 1, 2008, John Granville, 33, a diplomat with the U.S. Agency for International Development, was being driven home following a New Year’s Eve party at the British Embassy in Sudan’s capital city of Khartoum. Another car began to follow Granville’s vehicle, then overtook and cut it off in the city’s Al Riyadh section. Two men got out and fired 17 bullets into the diplomat’s car, instantly killing the driver and wounding Granville in the neck and chest. He died in a hospital several hours later.

Granville’s murder devastated his family and friends in his hometown of South Buffalo and rocked the international aid community. His peers and faculty in Clark’s Department of International Development, Community, and Environment (ICE), where he’d earned his master’s degree in 2004, were left grappling with the loss of one of their own, a smart and charismatic man who’d dedicated himself to humanitarian work with unswaying commitment and boundless compassion.

“John had a great intellect,” recalls Laura Hammond, one of his ICE professors. “But what really drove him was his heart.”

The circumstances behind Granville’s death had long been a source of pain and confusion for the people he left behind. Speculation held that the ambush was retribution by a terrorist faction over the West’s support of southern Sudan’s push toward independence from northern Sudan, and retaliation for the introduction of peacekeepers into Sudan’s embattled Darfur region. Before his death, Granville had been assisting with the distribution of more than 200,000 solar-powered radios to remote villages in southern Sudan, where access to information was scant. He wanted the people to be well-prepared for elections planned for 2009, as well as for the 2011 referendum that would eventually establish South Sudan’s independence after a bitter 20-year civil war.

In the wake of the murders, the Sudanese government had quickly apprehended and imprisoned the two gunmen and two accomplices who were in the vehicle that night (a fifth man was charged with buying the weapons). All four escaped a year later in what the Sudan Tribune described as a “Shawshank Redemption-style prison breakout.” According to a 2020 account in The Buffalo News, “One of the convicts was quickly recaptured and another was killed in Somalia in 2011, but two remain at large and the Sudanese government even pardoned one of them.”

In December 2020, almost 13 years after Granville was assassinated on the streets of Khartoum, it was announced that Sudan had reached an agreement with the U.S. government under which it will commit $335 million to compensate the victims of state-sponsored terrorism, in effect removing the country from the U.S. list of terrorist-supporting states. Of that payout, $2.5million will go to Granville’s mother, Jane.

Congressman Brian Higgins of Buffalo, who grew up three streets away from the Granville family and who fiercely advocated for restitution on their behalf, says Sudan’s admission of culpability was welcome and the financial settlement deserved, if late.

“It was insufficient justice,” Higgins insists, “but it was still some justice.”

The frigid winters of South Buffalo couldn’t have prepared John Granville for Sudan’s searing summers, but he never gauged his life or career by a metric as basic as a temperature reading. He’d grown up in a tightly knit Irish Catholic neighborhood, playing hockey and rowing on the crew team at Canisius High School. His mother attributes the Jesuit education he received at Canisius with instilling in John a desire to contribute to the world, a spark he carried with him to Fordham University, where he studied international relations.

Africa was his particular passion.

“He believed in the people of Africa,” says Jane Granville. “He did so much there; it was just part of his caring nature. It’s who he was.”

After Fordham, Granville worked for the Peace Corps, teaching English in the Cameroon village of Bamendjou. There, he met fellow teacher and native of Cameroon Andre-Guy Soh, M.A. ’05. The two became fast friends. John’s gentle and persuasive teaching method inspired his students to quickly master English-language skills, Soh says. “Go back and ask any of his former students, and they’ll tell you that John gave them a passion for English. He took something that seemed scary to them, and soon he had these kids discovering how to think in a new language.” 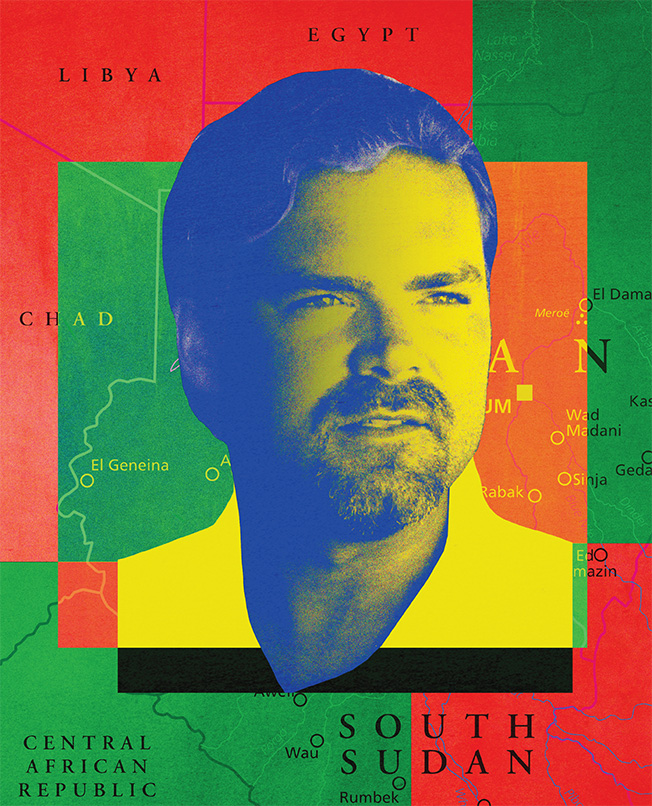 Granville was equally admired and respected beyond the school, so much so that the local chief, or sokoudjou, named John his adviser, or “chief ’s son,” a rare honor. “John always wanted to understand why we did certain things, where those things came from in our history, and why they were important. He got to the roots of our culture, and he embraced it,” Soh explains.

Granville was determined to bring people together, whether that meant coaxing a guest speaker to visit Clark to offer expertise on a compelling topic or organizing a group trip to a sports bar to watch the Super Bowl. For a seminar on food insecurity taught by Hammond, the class would meet in a different student’s room and eat together. When it was Granville’s turn to host, he drove home to Buffalo and brought back his mom’s meatloaf. “John didn’t know how to cook,” Hammond laughs. “I think he was a little panicked about what he could possibly serve us.”

Granville and fellow student Ka Vang, M.A. ’03, spent the summer of 2002 doing humanitarian work with the U.S. Agency for International Development (USAID) in southern Sudan. That experience led them to co-author their dissertation, and inspired them to return to the region in 2003.

“John was just one of those people who everyone wanted to be friends with,” Vang recalls. “He was kind, generous, bright, and very idealistic. He wanted to make the world a better place.”

That world came with risks. Sudan’s civil war over natural resources, religion, and issues of autonomy was bloody and brutal. And while visitors from the West were welcome in the south, the reception was far chillier, sometimes hostile, in the north.

That didn’t bother Granville. When he went to work with USAID’s democracy and governance team, Hammond says, “He knew the risks, but he knew it was exactly what he wanted to do.”

Brian Higgins views the John Granville saga from a rare perspective. He is one of very few people on the planet who can speak with equal insight about Buffalo and Sudan, where he spent substantial time as a member of the Foreign Affairs Committee. On New Year’s Day, the morning John was killed, he was on the phone with then-Secretary of State Hillary Clinton and members of the State Department and CIA, trying to gather whatever information he could share with the Granville family.

Higgins reflects admiringly on Granville’s work in southern Sudan — his efforts to provide quality education for children and the initiative to bring radios to villages that often lacked electricity, roads, or running water. Those radios, he notes, were critical to recruiting the poorest of southern Sudan into the process that would determine the fate of their country and perhaps their individual destinies.

On March 8, 2010, a new school for young women was dedicated in the town of Kurmuk in southeastern Sudan. The Granville-Abbas Girls’ Secondary School was named in honor of John Granville and Abdelrahman Abbas Rahama, the driver who was killed alongside Granville in 2008. The school’s stated mission was “to increase Sudan’s capacity to provide quality primary and secondary education, especially for girls, who have lower literacy and lower rates of school attendance than boys.”

Before it was later destroyed during the civil strife that engulfed the region, the school exemplified the work and spirit of John Granville, Hammond says. “John was all about being on the ground, delivering at the grassroots level,” she says. “His goal was to translate initiatives into concrete action.”

She suspects Granville’s attackers that night in Khartoum didn’t target him as an individual, but rather what he represented. He was, she says, symbolic of incipient change in Sudan that many were unwilling to accept.

“We’re still not sure if the assailants were tied to the government, but the government certainly covered up the crime,” she says. “Paying the settlement is recognition that the government bears at least some responsibility for what happened.

“Anyone who knew his commitment to local development — to education, to peace-building — wouldn’t have targeted him personally. No way. He didn’t think of himself as any more special than anyone else; in fact, he was just the opposite. John’s attitude was not ‘Let me teach you how it’s done,’ but rather ‘Please teach me.’”

The Granville-Abbas Girls’ Secondary School may yet rise again. Vang notes that her husband, an adviser at USAID in East Africa, has met with a former governor in South Sudan to discuss plans to rebuild in the near future.

When he was in South Sudan in 2011, Higgins spoke with several of Granville’s former USAID colleagues, who were saddened to learn of the destruction of the girls’ school that bore his name. But they held out hope the emergent nation of South Sudan ultimately will be stronger thanks in part to the efforts of John Granville and others who helped the people embrace their independence.

“Nation building is arduous and takes a long time, and South Sudan is still the newest country in the world,” Higgins says. “I believe John’s work is still waiting to blossom there.”