Professor’s book examines the contradictions of policing in China

Suzanne Scoggins has read plenty of literature about contentious politics and protests in China in her years researching the country. But when the professor of political science started working on a book about policing in China, she learned, to her surprise, that local law enforcement there is largely ineffective. Her book, “Policing China: Street-Level Cops in the Shadow of Protest,” explores the paradox of China’s self-projection as a strong security state despite its weak police bureaucracy.

Scoggins opens the book by recounting the murder of a grocery store clerk. A man in the store began stabbing the clerk and police were slow to intervene.

“One officer throws a box, then another one throws a stool, and it’s only when the man has killed the young girl and starts to turn the knife on himself that the police are actually able to step in,” she says. “The reason I start with this story is because there’s an investigation afterward and everyone’s really upset because if someone’s being murdered on the street, you expect the police to stop them.”

Scoggins calls it an extreme example of poor policing, but one exemplifying the tensions between China’s centralized Ministry of Public Security, which sets policing policies, and the local governments that execute them.

Officers are generally understaffed, undertrained, and underresourced Scoggins learned. They aren’t armed. The way they handle day-to-day policing — theft, traffic complaints, and violent crime — is in stark contrast to their more strategic and forceful response to political protests, which involves coordination, training, and specific protocols.

Scoggins conducted 112 interviews with 56 officers, spending much of that time building trust with her subjects. 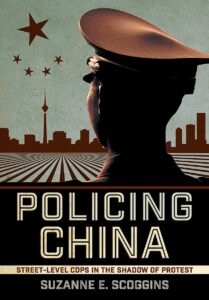 “I’m a Caucasian American woman doing research in a place where people have different experiences than me,” she says. “But if there was something in common we could talk about, like if they maybe had traveled abroad, or if we were the same age or if they had a child who was the same age as mine, it was a little bit easier to bridge the gap.”

Scoggins discovered that crimes were not being solved at the rate China was reporting. Many of the officers expressed discontent with a lack of support for their efforts.

“There were definitely some officers who were proud of their work, proud of their ability to serve, and to wear a uniform and to try to help people,” she says. “But in general, it’s a really difficult job with very few resources and pretty low pay. There’s a lot of stress associated with that.”