‘Without history, there is no science’

As a 14-year-old, Katie Gross ’22 had the rare opportunity to job shadow two doctors: a pulmonologist in the intensive care unit at Kaiser Permanente San Rafael in San Rafael, California, and an orthopedic surgeon.

Then as a junior at St. Vincent de Paul High School, Gross started studying the Holocaust during a world history course and found herself as intrigued by history as she was by medicine. Today, Gross, a double major in biochemistry and molecular biology and history, sees links between those disciplines that are stronger than most people realize.

“I listened to patients tell me their symptoms, their backgrounds, their history,” she recalls of her experience with the doctors. “When I was reading about Holocaust survivors, looking at 20th-century Europe, and listening to survivors tell their stories, I became aware of the similarities between these two types of personal storytelling.

“Medical history is one of the most important aspects of medicine. That’s how you diagnose people. You can’t get to treatment if you don’t understand the history of the patient,” Gross says. “Without history, there is no science. History is a fundamental aspect of understanding scientific mechanism.”

Gross grew up on a farm in Sonoma, California, next door to Ann Weinstock, a Holocaust survivor who was once interviewed by Steven Spielberg.

“I remember listening to her tell a story about being a nurse in Berlin, and because she was a nurse, the Nazis viewed her as beneficial,” she says. Toward the end of the war, Weinstock was sent to a concentration camp.  “Ann pretended to be dead, and she hid in a pile of bodies that were being carted off. She slipped out of the pile and escaped.”

Gross arrived at Clark to prepare for a career in health care, and she eventually added the history major. 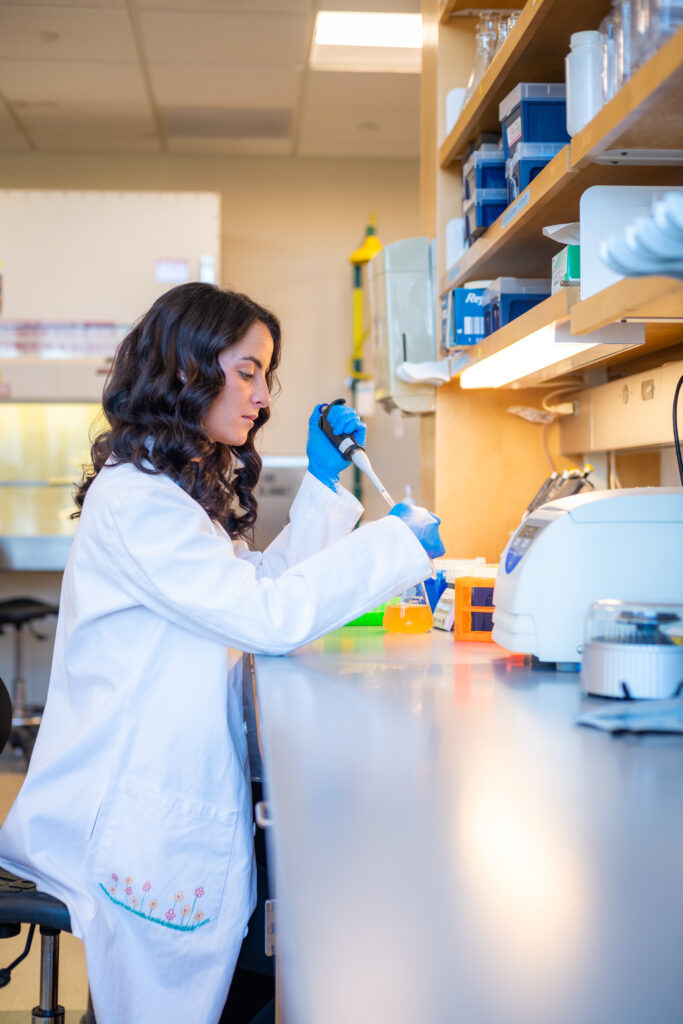 In biochemistry, Gross has studied under professors Noel Lazo and Donald Spratt. She also spends 40 hours a week at UMass Chan Medical School, working in the genetics lab of Dr. Craig Mello, a 2006 Nobel laureate.

In Mello’s lab, Gross assists with research on the inheritance of epigenetic factors using nematode worms known as C. elegans to study how behaviors and environmental factors can affect genetic function, perhaps for generations.

Gross’s research has been inspired in part by a 2018 study that showed grandchildren of Holocaust survivors were dying prematurely of heart disease. Pyrosequencing found that the grandchildren had a silencer on the gene that suppresses cortisol production, the fight-or light molecule.

“If you’re in a stressful situation, you’re going to have a fight-or-flight response, triggering an increase of cortisol, which could happen in a concentration camp,” she says.

The gene silencer, called a methylation tag, appeared in Holocaust survivors and was passed to their descendants, according to the study.

With genetics at the heart of her studies, Gross wanted to further explore the link.

“Right now, I’m working with C. elegans and exposing them to high-stress environments. Then I perform deep sequencing and see if there is a shift in their genome,” she says.

Her history major carries a concentration in Holocaust and genocide studies. Gross has been writing a thesis about how antisemitism and gender discrimination shaped the professional choices of Jewish female physicians during the Interwar period in Central Europe. It explores the lack of antisemitic rhetoric that these women were exposed to before 1933, and the onslaught of persecution that they faced due to their religious affiliation with Judaism following the rise of Naziism. Her mentors include professors Frances Tanzer, Nina Kushner, and Amy Richter.

Gross looks to find meaning through the patterns of suffering that have afflicted humanity across the years.

“I think we repeat ourselves over and over,” she says. “We are very much cyclic animals. Understanding genocide studies, especially the Holocaust, is important in understanding our nature, our purpose, why do we do the things we do.”

Gross plans to apply to a number of M.D./Ph.D. programs. She has ambitions to work with patients in a clinical setting, as well as in a lab, overseeing the transition between drug development and delivery. She’s also interested in studying fertility, particularly the link between germline and progeny.