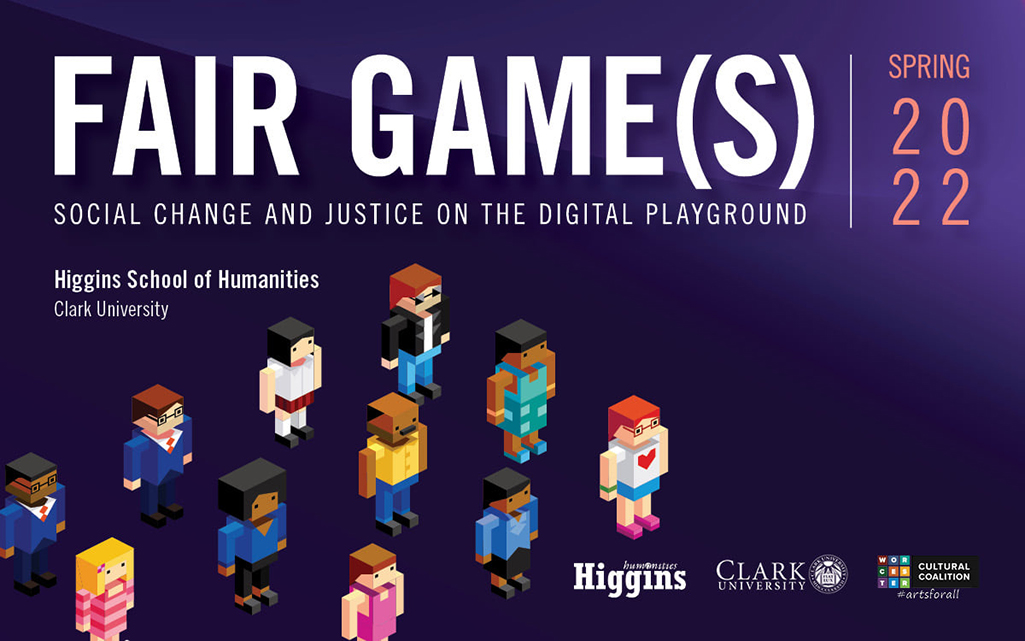 The Higgins School of Humanities has pressed play on its Spring 2022 symposium, “Fair Game(s): Social Change and Justice on the Digital Playground,” which tackles a variety of socio-political issues through the lens of the global gaming industry. Through exploration of the digital gaming culture and the perspectives of those who are part of it, we will see how the virtual world can transform into a vehicle for fostering social change and inspiring justice.

The symposium launched on March 16 with Asian/American Gaming: Techno-Orientalism, The Open World Empire, and The Race Card, a conversation, facilitated by Dean of the College Betsy Huang, about a range of topics in contemporary Asian/American gaming. Huang was joined by Associate English Professor Tara Fickle of the University of Oregon, and Christopher B. Patterson, assistant professor in the Institute for Gender, Race, Sexuality, and Social Justice at the University of British Columbia.

All symposium events will be held on the Clark University campus and are free and open to the public. Attendees are expected to comply with Clark University’s most current vaccination and masking policies.

Learn more about these and other events in the Higgins School of Humanities calendar.

Games, dev-jams, streams, and the culture surrounding them allow people to connect through formative and compelling shared experiences. Over the past two years of unprecedented isolation, video games and the gaming community have helped millions around the world stave off loneliness and improve their mental health through collaboration, cooperation, and competition. Clark University professors and Higgins Faculty Fellows Amanda Theinert and Terrasa Ulm will explore how these connections continue to shape and support gamers around the world.

Gaming the Humanities, and Humanizing Games

Games are the largest cultural and entertainment forms of our time. Pre-COVID, thousands of players would gather in parks to play Pokemon Go or in large stadiums to see international teams play a game of League of Legends. Games are so popular, that they have begun to influence our everyday lives. The practice of “gamification,” using game mechanics in traditionally nongame activities, is all around us. But can we use games and game design thinking to shift our relationship to the world and design a more just society?

Augmented Abilities in the Virtual World

Gaming isn’t just for fun, explains Higgins Faculty Fellow and Computer Science Department Chair John Magee. Entering a virtual world allows people to transcend challenges — disabilities, global pandemics, or otherwise — providing human-centered experiences of socialization and exploration. The ability to easily communicate with the outside world seems mundane to many of us, but accessible technologies can make this everyday task feel like a superpower to some. In this talk, Magee examines the great powers and responsibilities endowed by technologies that seek to invent the future.

Game Designs for the End of the World

Climate change, pandemics, political polarization, systemic racism, and capitalism run amok — if there’s anything that marks the 2020s, it’s a sense that life on the planet is increasingly under attack. Games, particularly video games, have explored these apocalyptic themes, often putting players in the position of saving the world or surviving its ruins. But what if games were designed to save the real world, or at least better survive these strange times? Colleen Macklin, a game designer and associate professor in the School of Art, Media and Technology at Parsons School of Design, will discuss why games are uniquely suited to this moment, and how we can create fun and entertaining games that help us not just save the world, but imagine a better future.

The Future of Video Games: Race, Play, and the Speculative Imagination

In this talk, Professor TreaAndrea M. Russworm of the University of Massachusetts Amherst examines different modalities of Black cultural life — hip-hop, Blaxploitation film, popular fiction, and simulation games — as spatial-speculative tools for playing in a broken world. This love letter, which is addressed to Mos Def, Octavia Butler, and Black game designers, is also written to you, if you consent, in hopes that together we can critically explore some of the ways in which Black epistemologies model productive ways of dissolving and transgressing the boundaries of the “good no-place” where games collide with the cinematic and other arts.

This lecture will be presented by Whitney “Whit” Pow (they/them), assistant professor in the Department of Media, Culture, and Communication at New York University.

The State of the Gaming Industry: A Conversation with Stanley Pierre-Louis ’92

Join us for this dynamic conversation between Clark alumnus Stanley Pierre-Louis ’92, president and CEO of the Entertainment Software Association, and Paul Cotnoir, dean of the Becker School of Design & Technology at Clark University.