Clark to hold 118th Commencement on May 22 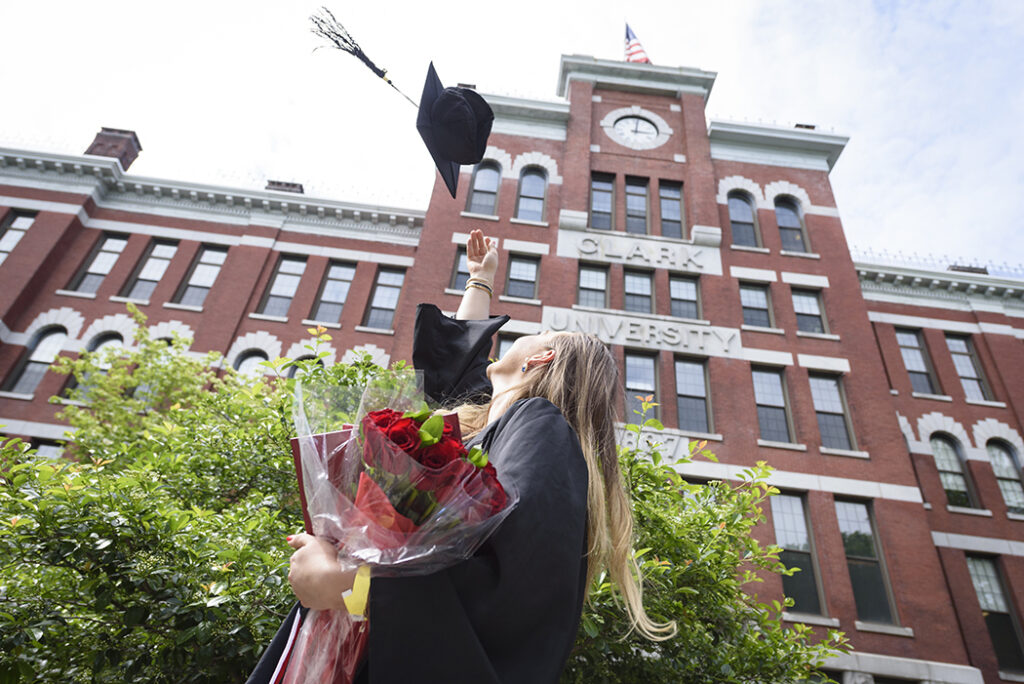 Clark University will hold its 118th Commencement exercises on Sunday, May 22, on the main Campus Green.

In addition to recognizing the Class of 2022, honorary degrees will be conferred on four accomplished individuals: a playwright who helps us interpret the world around us and our place in it, two groundbreaking historians who challenge us to learn from the past as we work to create a more just and inclusive world, and a leader who dedicated his entire career to Clark.

Renowned scholar and civil rights activist Mary Frances Berry, the Geraldine R. Segal Professor Emerita of American Social Thought at the University of Pennsylvania, is the Commencement speaker and will receive an honorary Doctor of Laws degree. For more than four decades, Berry has been one of the most visible and respected activists in the cause of civil rights, gender equality, and social justice.

Berry was the first woman to lead a major research university, serving as chancellor of the University of Colorado at Boulder from 1976 to 1977, where she was also the first Black American to lead the institution.

President Jimmy Carter named Berry assistant secretary for education in the U.S. Department of Health, Education, and Welfare in 1977; three years later, he appointed her to the U.S. Civil Rights Commission, where she led the charge for equal rights and liberties for all Americans over the course of four presidential administrations.

Berry co-founded the Free South Africa Movement (FSAM) in 1984, and in 2013 received the Nelson Mandela award from the South African government for her role in raising global awareness of the injustice that helped to end more than 40 years of apartheid in that country. A prolific author, Dr. Berry’s books cover a wide range of subjects, from the history of constitutional racism in America to the history of progressive activism.

Also receiving honorary degrees on May 22:

David Angel was Clark University’s ninth president, from 2010 to 2020. He previously had served as provost and vice president of academic affairs, and first joined Clark as a professor of geography in 1987.

Informed by his own scholarship on how cities and economies evolve, Angel was a champion of how Clark’s intimate size and diversity of thought offer ripe opportunities for collaboration across disciplines and with businesses and community partners. As provost, he developed the Liberal Education and Effective Practice (LEEP) model, which stresses that knowledge gained in the classroom is amplified when it’s applied beyond campus. As president, he oversaw the construction of the Shaich Family Student and Alumni Engagement Center, as well as the most ambitious and successful fundraising campaign in University history. President Angel will receive an honorary Doctor of Humane Letters degree.

Annette Gordon-Reed, the Carl M. Loeb University Professor at Harvard University, is a leading voice on race and history in America. Her book, “The Hemingses of Monticello: An American Family,” won the 2009 Pulitzer Prize in history, the National Book Award for nonfiction, and fourteen other awards.

Gordon-Reed’s other works include “Thomas Jefferson and Sally Hemings: An American Controversy”; “Vernon Can Read! A Memoir,” a collaboration with Vernon Jordan; and “Race on Trial: Law and Justice in American History.” The New York Times named her most recent book, “On Juneteenth,” one of the 10 best books of 2021. Her honors include the National Humanities Medal (awarded by President Barack Obama), a Guggenheim Fellowship, and a MacArthur Fellowship. She is an elected fellow of the American Academy of Arts and Sciences and a member of the American Philosophical Society. Gordon-Reed will receive an honorary Doctor of Laws degree.

Doug Wright is an award-winning playwright, librettist, and screenwriter. His 2004 Tony Award-winning play “I Am My Own Wife” was the first one-person show ever to receive a Pulitzer Prize. For his 1996 play “Quills,” he won an Obie for Outstanding Achievement in Playwriting and the Kesselring Award for Best American Play.

Wright’s other Broadway credits include “War Paint,” “Hands on a Hardbody,” “The Little Mermaid,” and “Grey Gardens.” Films include “Quills” and “The Burial,” currently in production. His most recent play, “Goodnight Oscar,” which stars Sean Hayes, premieres this month at the Goodman Theatre in Chicago. Wright will receive an honorary Doctor of Fine Arts degree.