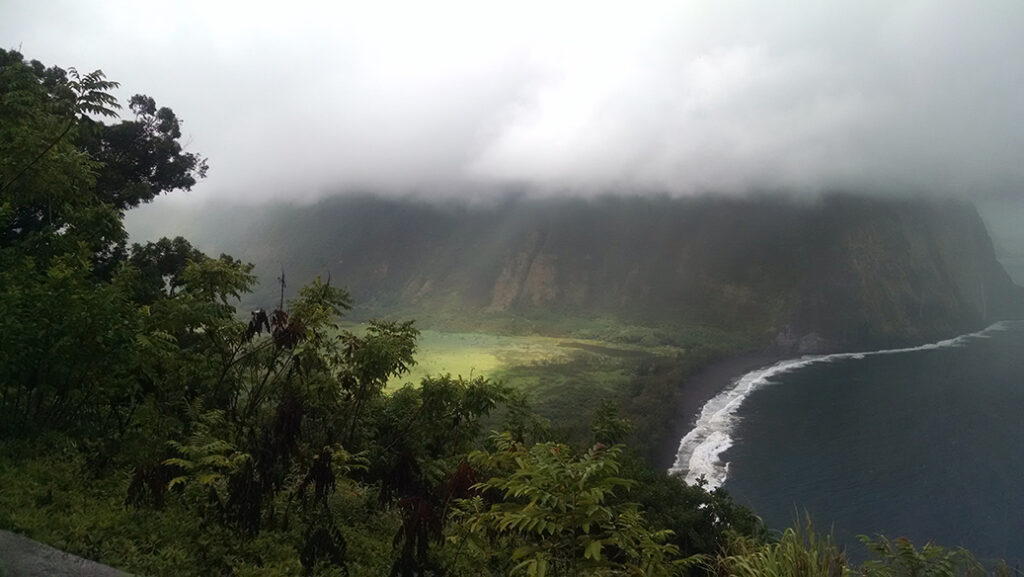 Before coming to Clark as an assistant professor of geography in the fall, Abby Frazier spent 12 years on the other side of the country, studying the climate of Hawai‘i.

Frazier, a Vermont native, first traveled to the Pacific as a graduate student at the University of Hawai‘i at Mānoa, where she researched patterns of average rainfall and completed her dissertation on the effect of climate variability. Today, Zoom meetings let her easily navigate between time zones, so she teaches courses on campus at Clark while also continuing her research in the Pacific.

“From a climate perspective, Hawai‘i is a fascinating place to study because you have incredibly varied climates that occur over very short distances. On one island, you can see everything from alpine tundra to a dry desert to super-wet rainforest — and everything in between,” says Frazier.

ClarkNow sat down with Frazier to ask about the effects of climate change being seen across Hawai‘i and the Pacific Islands, and how her research translates into a classroom some 5,000 miles away.

What sparked your interest in studying the climate?

It came down to the first weather and climate course I took as an undergraduate at the University of Vermont. I just loved being able to explain why things were happening, why I would see the clouds in the sky, why you see deserts in certain parts of the world. That really drew me in. I also loved looking at things spatially.

Are you drawn to the field out of a desire to make a difference before the effects of climate change are unreversible?

I am absolutely committed to finding the best way to contribute in any way I can to help solve this climate crisis. For me, the way to do that is through my research, trying to help answer questions, and to further the science and outreach as much as possible.

What are some of your current research projects?

One of the big ones is leading the Hawai‘i and Pacific Islands chapter of the Fifth National Climate Assessment. Congress mandates that the U.S. put out a report every four years to synthesize the state of climate change and its effects. I’m leading a team of about 15 authors to compile everything we know about climate change, its impacts, and adaptation happening across the Pacific Islands region. That is not only Hawai‘i but also Gaum, American Samoa, the Commonwealth of the Northern Mariana Islands, Republic of the Marshall Islands, Republic of Palau, and the Federated States of Micronesia. It’s an incredibly diverse region with thousands of islands, dozens of different indigenous cultures, and complex and challenging climate problems. The report will be published at the end of 2023, so we are right in the middle of it now.

Another project I am really excited about is called the Pacific Drought Knowledge Exchange. This is in partnership with groups in Hawai‘i and across the Pacific, trying to facilitate collaboration between researchers, scientists, and managers on the ground to co-produce different drought products and get data into the hands of people who need it to make decisions.

Drought is a major issue in the Pacific Islands, especially in Hawai‘i. People tend to think of how wet Hawai‘i is, but it also has incredibly dry areas that receive fewer than 10 inches of rain a year. We are right in the Pacific, so we have all these impacts of natural climate variability like El Niño–Southern Oscillation, that drive drought events.

One of the new projects is to install a network of climate stations across the state of Hawai‘i. We received $1 million from the National Science Foundation and are going to install around 80 or 90 climate stations. This is work I started more than a decade ago with GIS analysis to understand the state of our climate network. It feeds into our new climate data portal that launched last week, displaying near-real-time, high-resolution maps of yesterday’s temperature and last month’s rainfall.

What effects of climate change are being observed across Hawai‘i and the Pacific Islands?

Over the last 30 years — in some places, even longer — we’ve seen a long-term drying trend, including several multiyear severe drought events that have caused big impacts, especially in farming, ranching, and water supply. There are a lot of folks in Hawai‘i who live off the grid and use water catchment for their drinking water and domestic water. Any time you have a drought, you start seeing people who need to go purchase water. It becomes very expensive.

We have noted there are a lot of gaps in our knowledge in terms of the socio-economic impacts of drought. We think drought affects tourism and aspects of public health and mental health, but we need more widespread social science research.

Another impact we’ve seen is a big increase in wildfires. Wildfire and drought are linked, and there is an added human dimension because nearly all wildfires are started by humans. Also, land cover change components are really affecting wildfires. An example of that is on the island of Maui, where the last sugar cane plantation recently closed; this fallow land has seen repeated fires every year since. Wildfire burns a greater percentage of Hawai’i and the Western Pacific than what you see in the mainland U.S. Ten percent of the island of Guam burned during the 1997-98 El Niño event.

Is there time to reverse these trends?

When it comes to some of the terrestrial impacts, things like drought and wildfire, I think management actions and policies can help make systems more resilient. If we’re using more sustainable water systems, if we’re fixing leaks in our water transport infrastructure before there are problems — there are actions we can take now to help prepare our systems. In terms of effects like sea-level rise, which will have a huge impact on the Pacific Islands, we are going to lose land area, so adaptation actions are critical.

How much of your research makes its way into your classroom?

My students can tell you I’ve been talking about Hawai‘i throughout my courses. The reaction I’ve received is positive. Students are excited to hear perspectives from places they’re not familiar with. I included a section on Hawai‘i in one of our labs and the students worked with one of the websites I helped develop to answer questions and learn more.