A New Earth Conversation at Clark University will hold a Climate Teach-In on Friday, March 18, that will bring together students, faculty, and staff for discussions about the impact of climate change on our lives, and possible solutions to address its greatest challenges. The event is a part of the World-Wide Teach-In for Climate/Justice, which involves thousands of organizations engaging in similar conversations.

Clark’s event, which will take place from 5 to 8:30 p.m., will include eight student-moderated panels that will cover topics from environmental justice to energy systems. Attendees will be able to question the panelists, who have expertise in a wide range of subjects such as climate science, adaptation, and communication. The event also will feature local food, climate-themed creative writing workshops, low-carbon-footprint food recipes, and climate change art among many other activities. 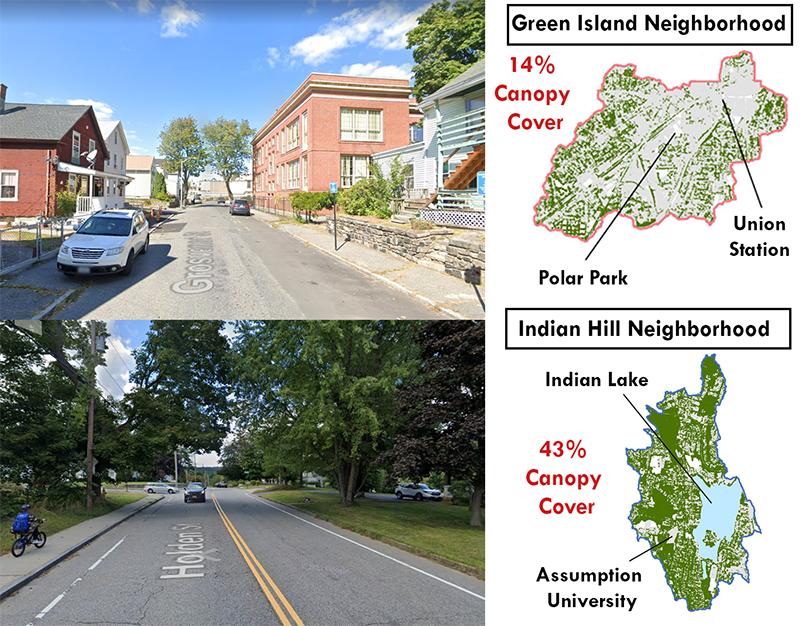 Apple Gould-Schultz ’23, who will be presenting at the Teach-In, is seeking solutions to mitigate the effects of heat islands in Worcester. Heat Islands are urban areas that experience higher temperatures than surrounding areas during extreme heat events due to an excess of unnatural surfaces, like pavement, and a lack of tree cover and green spaces. Trees act like air purifiers/conditioners that help protect residents’ from heat-related and respiratory illnesses.

Gould-Schultz’s findings highlight the importance of action to increase green spaces in the Green Island neighborhood of Worcester. She notes that there appears to be a minimum threshold of canopy cover that will reduce air temperature and improve water quality and flooding control. “With 14 percent of canopy cover, the Green Island neighborhood does not appear to have an amount that is close to that threshold,” she says. During their field study, the HERO fellows struggled to find shade and would have to stand next to a building to cool off and take water breaks.

Gould-Schultz and the HERO fellows are working with the newly formed Green Worcester Advisory Committee (GWAC) to create rules around where and how much green space needs to be added to neighborhoods. The GWAC’s Green Worcester Plan notes the need for more green space for activities such as urban agriculture, which can create healthier neighborhoods and address local food needs.

Worcester’s Regional Environmental Council (REC) helped Zac Davis ’23 find his purpose. “Doing good in the world is a passion of mine, but I didn’t know how it would manifest,” he says.

REC has started about 60 urban community gardens throughout the city, which appealed to Davis, who learned about the organization through conversations with Professor Morgan Ruelle.

“Being a young person growing up with climate change on my mind, the REC attracted me,” he says. “The work we are doing is important, but more needs to be done to get the word out and support local farms.”

Davis, who will be talking about his work with REC at the March 18 Teach-In, performs outreach and volunteers at farmers markets. His aim is to increase accessibility to nutritious fruits and vegetables for people living in economically marginalized areas of Worcester, where healthy food is often scarce.

If you are interested in being a part of the Green Worcester Advisory Committee, inquire at GreenWorcester@worcesterma.gov. You are invited to learn more about the Regional Environmental Council and A New Earth Conversation.