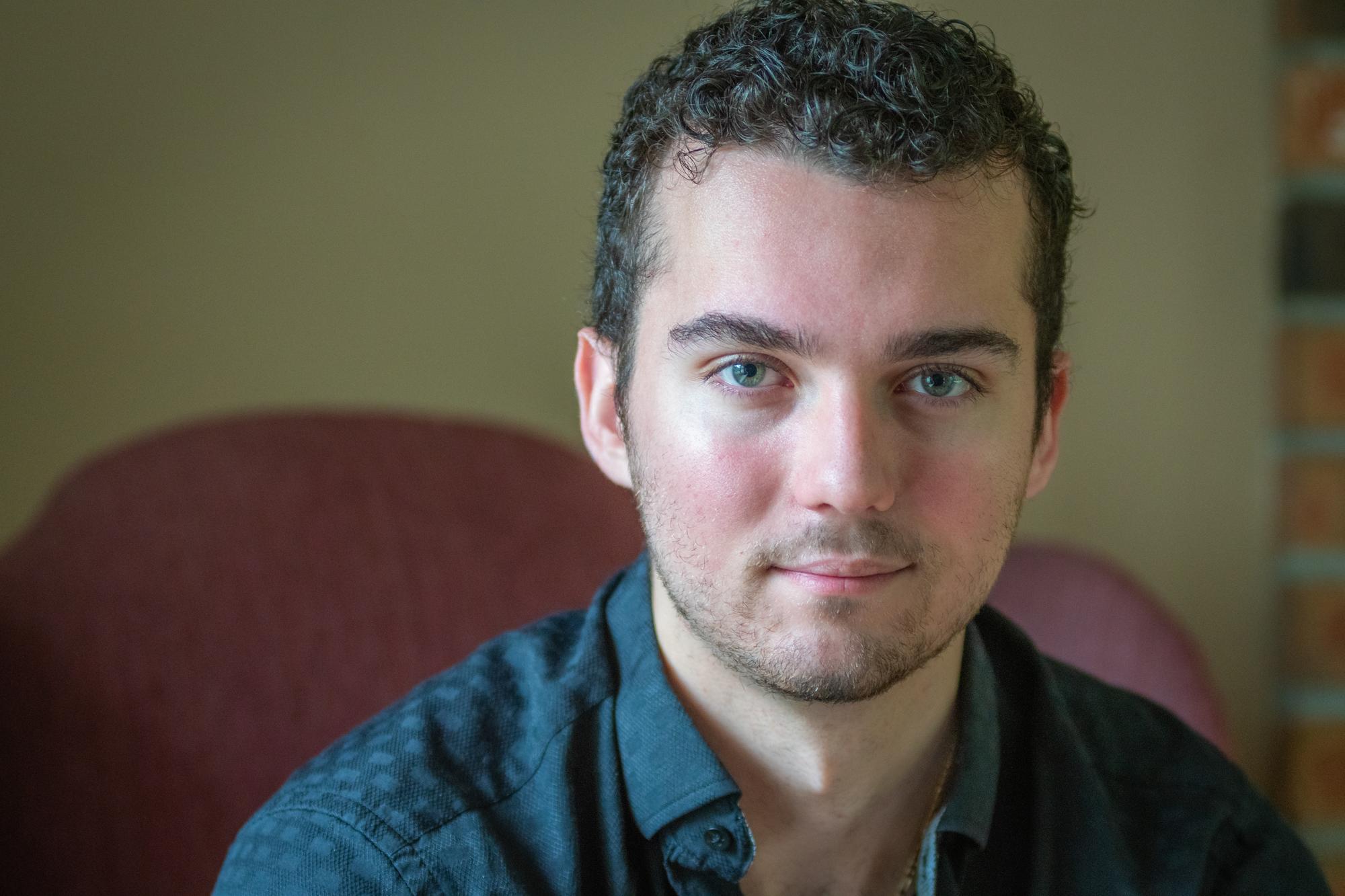 Members of the Post-War and Baby Boom generations who grew up around Worcester likely remember visiting Mechanics Hall for everything from concerts to wrestling matches. So when Steinbrecher Fellow Thomas Mueller ’22 was producing a jazz concert for area senior centers, he knew that staging the show in the historic downtown building would help create a nostalgic connection with the audience.

The project — “Seniors Love Jazz” — features original songs and covers arranged and composed by Mueller. Last semester, he performed the set in Mechanics Hall and will distribute a filmed version of the concert to senior centers throughout Worcester County and beyond.

“I’ve been performing for senior centers for quite a while,” Mueller says. “My grandfather had dementia, so I’d perform for his senior center. I realized they don’t have as many resources for entertainment, especially with the pandemic. That, along with my love for music, inspired the idea.”

Mueller, a management and music major, began working on the show last semester through a Steinbrecher Fellowship, collaborating with members of Clark’s Department of Visual and Performing Arts throughout the process. With the help of Jack Rooney ’21 and music professor John Freyermuth, he put together a 22-minute film of the show, which features classics by Bobby Darin, Frank Sinatra, Billy Joel, and others, as well as original pieces. Mueller arranged and composed each song and performed as the vocalist alongside a pianist, bassist, and drummer.

Each song was selected with the audience in mind, with an emphasis on classic pieces that seniors will remember from their childhood.

“Whenever I do these types of shows, the seniors will tell me stories about their youth, their grandchildren, or whatever it reminds them of. They’re always so happy to hear the music,” Mueller says. “Sometimes there are seniors who may not be in the best state because of dementia, but when they hear this music, they’re able to sing along to it and remember. I want them to get that feeling.”

Mueller grew up participating in musical theatre and choir, and began taking music theory classes in high school. At Clark, he started studying jazz with Professor Paul Buono after realizing the importance of its influence across genres.

“Professor Buono took me under his wing and taught me how to arrange for jazz,” Mueller says. “He was there the whole way.”

When Mueller received an email about the Steinbrecher Fellowship last spring, he knew the award would be the perfect opportunity to put together a meaningful project.

“I had the plan in place, but I didn’t have the team,” he recalls.

Through a friend, Mueller connected with Professor Soren Sorensen of Clark’s Screen Studies Program, as well as students in the School of Management who helped him design a website and market his project on social media.

“I’ve made great connections with everyone on the project, and that’s been a key part of the success,” he says.

The rest of the project quickly came together. The Buono connected Mueller with the director of Mechanics Hall, who helped him secure the location for the performance. Mueller was also able to work with Freyermuth as the audio engineer and Rooney as the film’s producer and editor.

“The hall was beautiful. The sound was beautiful. With the lights and everything, it all came together,” he says. “Mechanics Hall isn’t just the backdrop — it’s also something seniors in Worcester know about and can connect to.”

Recordings from the performance have since been posted to several streaming platforms, including Spotify, iTunes, and Apple Music, and Mueller is in the process of distributing the film to senior centers throughout the state.

“There are more than 300 senior centers in Massachusetts. My goal is to get as many of them as possible,” he says.