Clark University has announced the recipients of the second annual President’s Achievement Awards for Inclusive Excellence (PAAIE), which recognize individuals, units, or programs for their exemplary contributions to advancing equity, inclusion, and diversity at Clark or in the Worcester community.

To continue to foster a more diverse, equitable, and inclusive community, each award includes a monetary prize for the awardee to designate toward a Clark program or department that aligns with their work.

This year’s awardees, selected from a competitive pool of nominations submitted by faculty, staff, and students across the campus community, are Rosalie Torres Stone, associate professor of sociology; Denisha Parks, women’s basketball assistant coach; Jackie Madrigal ‘22, president of the Clark Undergraduate Student Council; and Rise for Racial Justice, a group formed to create Black History Month programming around themes relevant to the community.

“Clark strives to create a culture of inclusion that empowers all students, faculty, and staff to thrive — and this depends on the commitment of each of us individually and all of us collectively,” says President David Fithian. “The recipients of these awards inspire change, strengthen our campus, and make us a better University. I’m proud to be a part of the Clark community with them.”

Rosalie Torres Stone, who was nominated for the award by Professor Shelly Tenenbaum, works closely with students who have experienced challenges in pursuing their degree, including first-generation, undocumented/DACA, and BIPOC students. Her flagship course, Community and Health: Nonprofit Grant Writing, directly addresses race inequalities by partnering students with local nonprofit agencies that work to eliminate racial health inequities in Worcester. Her commitment to diversity, equity, and inclusion also extends to her research on refugee health inequities around race, immigrants, and refugees.

“Words cannot describe what this recognition means to me,” Torres Stone says. “What makes it even more special is seeing that it came from a selection committee made up of faculty, staff and students. In my eyes, this is absolutely the highest honor I have received in my career.”

Torres Stone plans to allocate the monetary portion of her award to the Multicultural and First Generation Student Support office to assist the needs of undocumented and DACA students at Clark. “As a member of the newly formed faculty governance committee on diversity, equity and inclusion, I will support inclusive policies, equitable practices, and faculty assessments that ensure success for groups historically under-represented in higher education,” she says.

“The work of diversity and inclusion is personal,” Torres Stone explains. “At an early age, I experienced feelings of social exclusion in my childhood neighborhood because of my Puerto Rican background and lower socio-economic status. My success in academics and participation in extracurricular activities in school always gave me that feeling of inclusiveness and belonging. However, none of it came naturally. I am here because of the experiences I have encountered, my students, and the beautiful people that truly believed in diversity, equity, inclusion and belonging. I am fortunate and grateful that I am now able to use my position as a faculty member to do the same for others.”

Denisha Parks, now entering her fifth season as Clark’s full-time women’s basketball assistant coach, served as acting head coach for Clark’s 2018–19 season, where she guided the Cougars to the New England Women’s and Men’s Athletic Conference (NEWMAC) tournament. Within her current assistant coaching role, Parks assists with all facets of the team, from recruiting to practice preparation and student-athlete development.

Outside of her coaching role, Denisha serves as the co-chair and coordinator of Clark Athletics’ diversity, equity, and inclusion committee, which was formed in the fall of 2020. Comprising two student-athletes, four head coaches, and the director of athletics, the DEI committee works to foster constructive dialogues around inclusion within Clark Athletics.

“I feel extremely honored to even be considered for this award, let alone to actually receive it,” Parks said. “I have been working hard on diversity, equity, and inclusion initiatives for both students and staff within the athletic department for some time now, and I believe we are making strides towards change.”

Parks shares that her work towards a more inclusive athletics department ultimately comes down to education. “A wise mentor of mine helped me realized that you learn far more from difference than you do the same. I believe that this work helps raise the awareness of how important it is to embrace differences, rather than simply tolerate them.”

Jackie Madrigal ’22 currently serves as president of the Clark Undergraduate Student Council, as well as an orientation coordinator, Connections@Clark mentor, and student programmer in the office of Multicultural and First-Generation Student Support.

“I am incredibly honored to be recognized for my efforts in contributing to an inclusive community,” writes Madrigal, “but it would be amiss to not recognize that there are countless of folks who have dedicated their time at Clark to advancing the needs of our community. Thank you to the ACE and Connections@Clark programs, and to those in the Black Student Union and Clark University Student Council collective; these three groups are where I have learned what inclusivity-in-action looks like. Clark is a better place with them here.” 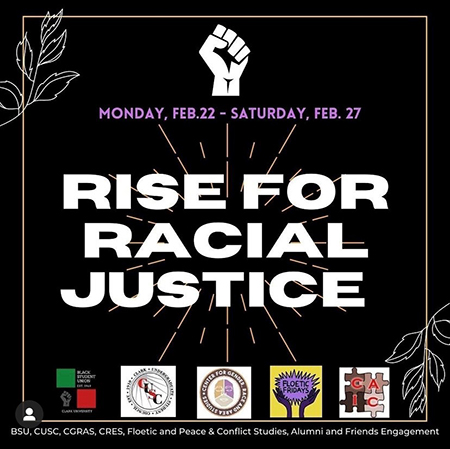 The group worked with faculty, staff, and students across various departments and offices to determine themes of urgency within the community. By holding events, bringing speakers to campus (virtually), facilitating discussions, and creating promotional materials, Rise for Racial Justice created awareness of topics including the history of Clark’s BSU, rethinking community policing with abolitionist organizations in Worcester, mutual aid, food insecurity, and more. The group also sponsored a panel discussion with Black alumni.

“This work is made possible by the belief that we can build the kind of communities we imagine and dream of,” the group shared. “It also has come with deep pain, questioning, trauma, and challenges, but the love we have shared with each other and in the community have made it all worth it, showing us what liberation can and should look like. Special thanks to the Peace and Conflict Studies and Comparative Race and Ethnic Studies programs, the Center for Gender, Race, and Area Studies and Alumni and Friends Engagement office, and the faculty and staff who have supported us along the way. Your guidance and love have made all the difference.”

Nominations for the 2022 Presdient’s Achievement Awards for Inclusive Excellence will open in the spring, when students, faculty and staff will be invited to nominate eligible individuals, units, organizations, or programs for recognition.