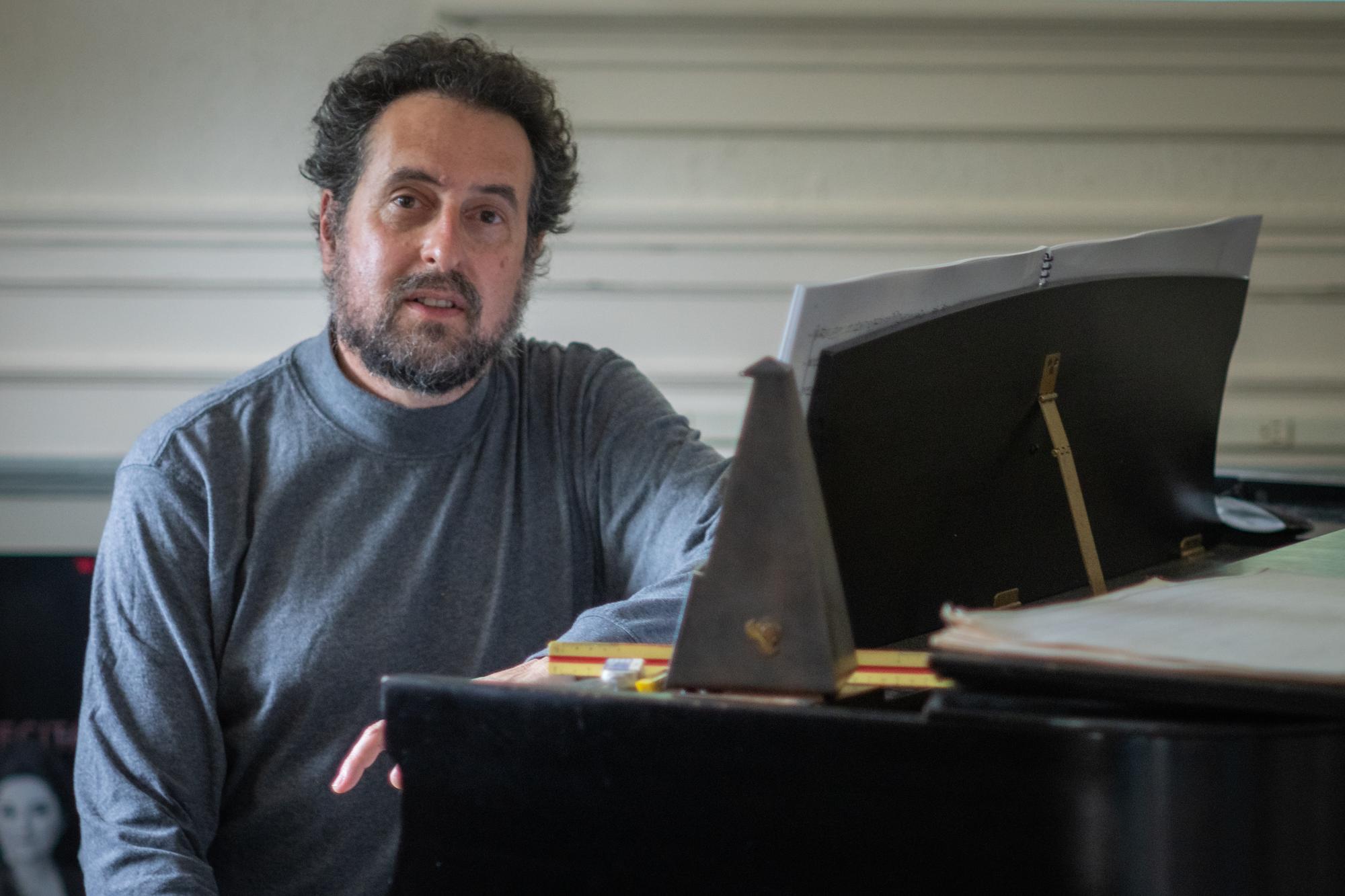 Two former lovers cross paths in a chance encounter at an Edwardian café. During the ensuing conversation, they share an intimate reunion and come to a new understanding about what took place between them.

That’s the premise of Clark University Professor Matt Malsky’s new opera, “A Dill Pickle,” which premieres this Sunday at the Jean McDonough Arts Center’s BrickBox Theater in downtown Worcester and online through a livestream. Based on a short story by Katherine Mansfield, the opera explores themes of lost love and regret, self-centeredness and missed connections, new experiences — and, improbably, a dill pickle.

Malsky, the Tina Sweeney, M.A. ’49, Endowed Chair in Music, has created a diverse body of musical works that have been performed and acclaimed both locally and internationally. “A Dill Pickle” is his first opera and a project that Malsky has contemplated for years.

“I’ve been collecting stories that might become operas for a very long time. When I was in graduate school, I had a file of stories that I thought might be good adaptations, but it wasn’t until recently that I felt like I had the experience and the background and the scope of imagination to really take on evening-length works,” he explains.

The performance stars Caitlin Felsman, mezzo-soprano, as Vera, and Clark music Professor Cailin Marcel Manson, baritone, as the unnamed male protagonist. The story explores alienation and power relationships between men and women, giving the audience access to Vera’s reactions through her memories and interior musings and monologues.

“It’s a very intimate opera, so small gestures like picking up a glove or offering a cigarette or looking off into the distance carry a lot of psychological weight,” says Director Kirk Jackson, a theater professor at Bennington College who became involved in the opera through a connection with Manson.

Malsky selected the short story after hearing Clark English Professor Elizabeth Blake give a talk about Mansfield and her work. He was impressed by her clearly drawn and relatable characters, and the story was the appropriate length for the type of performance he wanted to compose.

“I’m interested in things that are more of a human scale,” he explains. “‘A Dill Pickle’ is just a couple sitting at a café and having a conversation, and I was really impressed by the depth of what happens between them — both the conversation and the way that conversation triggers memories and internal monologues. I found it a very rich source for a story, and one that matched what I wanted to do musically.”

Malsky explains that when he composes, he goes through an intellectual and intuitive process to translate a story into music. He considers the kind of feeling he wants to evoke in his listener and crafts each piece to match that mood. When he evokes emotion in himself, he says, he knows he’s succeeded.

“There’s a common conception that a composer sits down and the inspiration flows and you just write down what you hear in your head. That may be the case for some people, but it’s not the case for me at all,” he says. “I have a box full of erasers that I keep handy. I probably erase four times as much music as I keep. My compositional process is really based on the belief that if I keep at it persistently enough, I’ll find a solution to the problems that I always start with.” 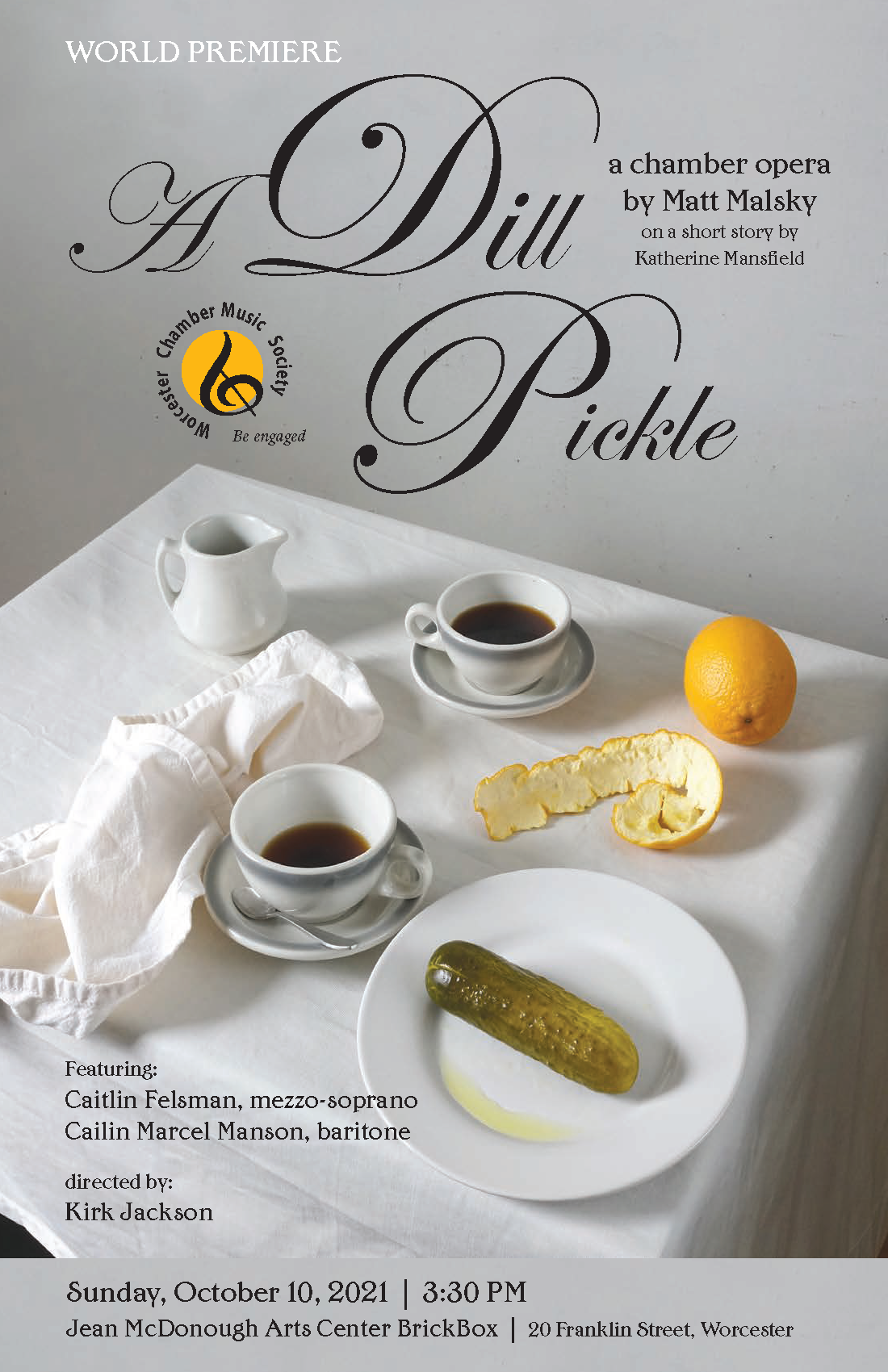 Malsky also approaches his work with historical references in mind. “A Dill Pickle” takes place in 1917 — a period in which Malsky immersed himself when composing the opera. He also spent time at the Newberry Library in Chicago, home to a substantial archive on Katherine Mansfield. There, he found inspiration in other areas of Mansfield’s work, including lyrics she wrote for her sister, who was a musician, in the 1890s.

Although the lyrics don’t appear in the opera, Malsky says they played an important role in informing the music he wrote.

What is also glaringly absent from the opera, Jackson explains, is the fact that it’s set in 1917 London and World War I is taking place behind the scenes. Although it’s only mentioned once, the war provides an interesting juxtaposition with the small, nuanced conflict taking place in the café.

“These people have a tender and heartbreaking moment reconnecting after not seeing each other for six years, but there’s this other thing happening in the world — and it’s barely mentioned,” he says.

Several of Malsky’s faculty colleagues at Clark are also involved in the production, both onstage and behind the scenes. Photography Professor Stephen DiRado will set the scene by projecting images onto a backdrop as the characters sit at a table, while theater Professor Kevin McGerigle will serve as lighting designer. Screen studies Professor Soren Sorensen will film the performance, and the opera will be livestreamed by music Professor John Freyermuth.

“A Dill Pickle” will premiere this Sunday at 3:30 p.m. For tickets and more information, click here.