University has ‘long and proud history’ of LGBTQIA+ activism
By Melissa Lynch ’95, MSPC ’15 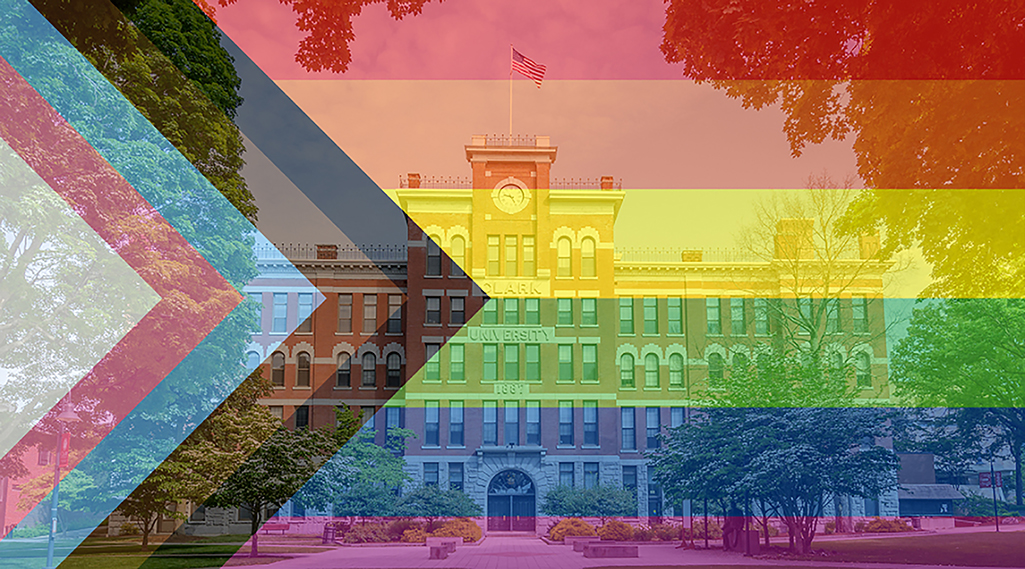 Clark University will celebrate Pride Month with an informal ice cream social in Red Square on Tuesday, June 29, at 4:30 p.m. All faculty, staff, and students are invited to drop by to connect, catch up, grab some Clark Pride swag, and recognize the University’s LGBTQIA+ community.

“The event grew organically when pandemic restrictions began to be relaxed,” says Michael Vidal, director of diversity and inclusive excellence. “A collective of faculty and staff wanted to come together to recognize Pride Month.”

The ice cream social will be informal, but signifies Clark’s commitment to the University’s LGBTQIA+ community, Vidal says. The landmark 2017 Survey of Campus Culture and Community and subsequent #ClarkForward initiative showed that students, faculty, and staff would like to see more activity in this area.

“We’re mindful there is interest within the Clark community for us to do more,” says David Chearo, vice president for planning and strategic initiatives. “As we develop a strategic framework for Clark’s future, we’ll continue to consider those interests as part of our broader planning efforts.”

In 2019, Professor Robert Deam Tobin spearheaded an exhibit, “Queering Clark,” highlighting the University’s LGBTQIA+ heritage from the 1970s to the present.

The first Pride celebrations took place a little more than 50 years ago, to honor the Stonewall Uprising of 1969. “Clark University has a long and proud history of LGBTQIA+ activism, including the creation of a Clark Gay Alliance and the establishment of a Gay Center in 1975,” Tobin says. “In the same year, Professor William Koelsch taught a course called ‘The Gay Liberation Movement,’ one of the first such courses in the nation, and the University hosted the New England Gay Conference, with the motto, ‘Our Diverse Selves,’ in 1976.” And in the 1990s, Clark was the first major employer in Central Massachusetts to offer benefits to domestic partners.

A lot has changed since the 1970s, Tobin adds. “Consensual sexual acts between members of the same sex are no longer criminalized in the United States and gay marriage is legal throughout the country. Public acceptance of homosexuality is way up, even among groups that used to have a lot of entrenched homophobia. Major sports teams, for instance, are increasingly accepting of openly gay players, as we have seen with the generally warm welcome of Carl Nassib, the NFL player for the Las Vegas Raiders, who just came out.”

Despite this progress, however, it is still often a struggle for individuals to come out to themselves, their family, and their friends, Tobin says. “This is why it is so important for Clark University to continue to work on becoming a safe and welcoming space for LGBTQIA+ people.”

Current political debates tend to focus on Trans issues like bathrooms and who can play on sports teams, Tobin adds. “I am confident that the arc of the moral universe will continue to bend toward justice, but we all need to support those who are helping move it along. That’s another reason why I’m so happy that Clark University is honoring Pride month, both in June and when Worcester celebrates Pride, in September.”