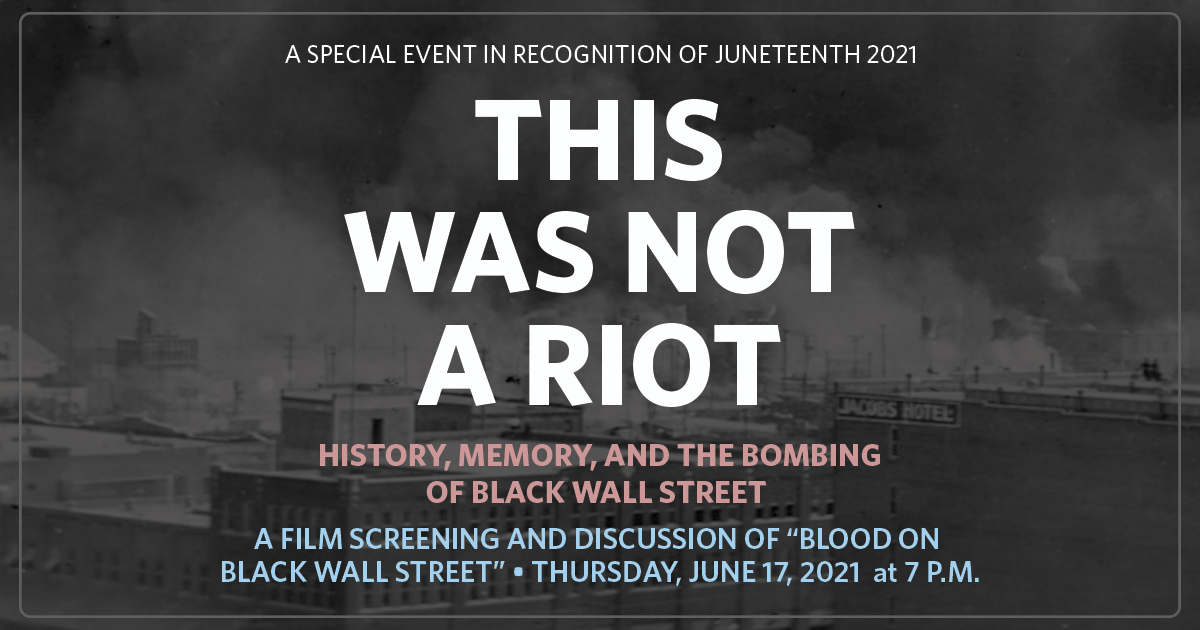 Clark University’s first annual observation of Juneteenth — the day in 1865 when enslaved people in Texas learned of the abolition of slavery in the United States, celebrated by Black Americans since to commemorate the end of slavery — will feature an event titled “‘This Was Not a Riot’: History, Memory and the Bombing of Black Wall Street,” with special guest scholar Dr. Kalenda Eaton, a professor in The Clara Luper Department of African and African American Studies at the University of Oklahoma.

The Zoom event at 7 p.m. Thursday, June 17, will open with a community viewing and discussion of “Blood on Black Wall Street,” a documentary about the massacre of the Black community in Tulsa, Oklahoma, 100 years ago. A post-viewing discussion will be led by Clark History Professor Ousmane Power Greene, with special guest Dr. Eaton.

While Juneteenth is a day to celebrate the end of institutional slavery in America, the holiday also honors those who were enslaved and who have suffered through racial injustice and violence.

Between May 31 and June 1, 1921, a mob of white rioters burned down the Greenwood District in Tulsa, a prosperous Black community within the Midwestern city known as “Black Wall Street.” The white mob killed hundreds of Black residents and destroyed more than 1,200 businesses, devastating the thriving business hub and impacting generations of Black Tulsans.

“By viewing ‘Blood on Black Wall Street’ and discussing the Tulsa Massacre,” Power-Greene says, “we’re participating in a process of national reconciliation over the long history of racist violence against black Americans, which for too long has gone unacknowledged by the majority of people.”

Thursday’s Zoom webinar requires registration in advance. After registering, you will receive a confirmation email containing information about joining the webinar.

A Fulbright Scholar, Dr. Eaton focuses on Black literary and cultural studies. Her research areas include literature written by women; studies of the American West; social and cultural history; digital humanities, and diaspora studies. Dr. Eaton is an Associate Fellow of the Center for Great Plains Studies, a SSRC-MMUF Fellow, and has received funding from the Mellon Foundation, the National Endowment for the Humanities, and the Social Science Research Council. She has published in the American Studies Journal, Teaching Western American Literature, and Africa Today.

The event is being co-hosted by the Office of Diversity and Inclusion and Africana Studies.

In addition, as part of Clark’s first annual Juneteenth holiday observance, the University will be closed on Friday, June 18, because the official day of June 19 is a Saturday this year.