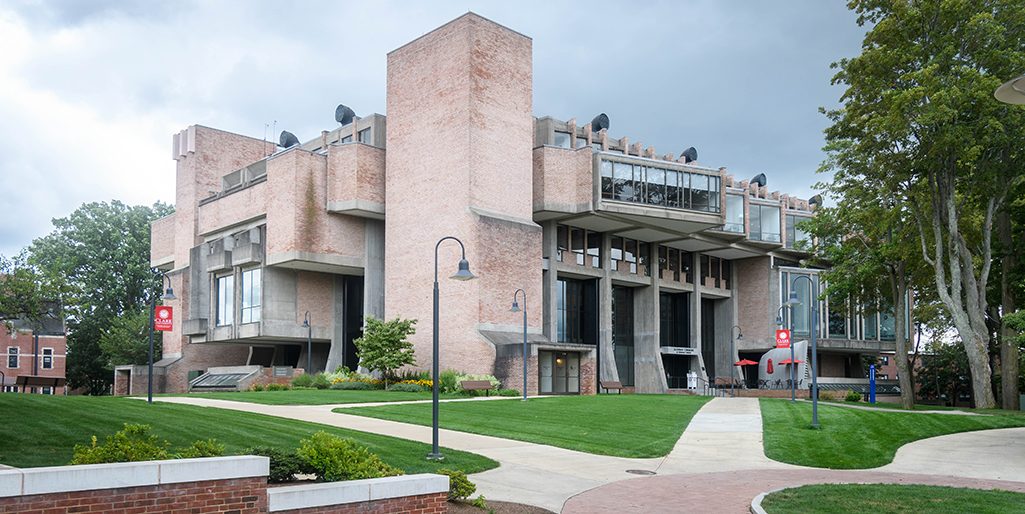 One of Clark’s most iconic buildings and celebrated pieces of architecture is in line for much-needed restoration and renovation work beginning next month.

The Robert Hutchings Goddard Library will undergo its first major exterior rehabilitation since the building was opened to widespread acclaim in 1969. Time and weather have eroded the 24 distinct roof structures atop the Goddard, worn away much of the façade’s masonry, and created numerous leaks, many of them caused by aging flashing and caulking around the windows.

President David Fithian and David Chearo, vice president for planning and strategic initiatives, prioritized the library rehab when conducting an assessment of Clark’s facilities, recognizing the risks being posed to an essential hub of academic and student life.

“When I first toured Clark’s campus I was struck by Goddard Library and what a signature building it is,” says Chearo. “I immediately wanted to know when it was built and what condition it was in. This is too important a part of Clark’s campus and the work of the University, as well as its history, to just ‘wait and see.’”

“I am very pleased steps are now being taken to address deteriorating conditions at Goddard before they became even worse,” says Dan Roderick, director of Facilities Management. “Without this action, we risked losing this Clark asset.”

The Goddard project will be divided into two phases.

To preserve the historical and visual integrity of the façade, original brick that is in good condition will be removed from areas that need new flashing and used to replace worn and missing brick in highly visible areas. New brick will then be used in areas where visibility is not an issue.

The work is expected to begin in late June and will extend into September.

Phase Two of the project, which will take place in the summer of 2022, will include replacement of the remaining roofs and reglazing of the original, now 50-year-old windows.

According to Roderick, the library’s issues have become more acute in recent years. The roofs, he noted, are well beyond their useful life span of 20 to 30 years, and poor drainage has resulted in water pooling in various areas atop the building. Crumbling concrete has led to instances of bricks tumbling from the façade, and the glazing is long outdated and falls short of modern standards.

The work on the Goddard Library will help preserve a building that was considered a revolutionary structure when astronaut Buzz Aldrin, the son of Clark alum Edwin Aldrin Sr. (Class of 1915), cut the ribbon on it on May 19, 1969, a mere two months before he walked on the moon as part of the Apollo 11 mission. Aldrin’s participation in the event was appropriate, since the building is named after Robert H. Goddard, A.M. 1910, Ph.D. 1911, the longtime Clark physics professor whose rocketry experiments formed the foundation of the modern space program.

The library is an enduring example of “brutalist” architecture, an innovative and bold style that the building’s architect, the late John M. Johansen, described as “being full of ideas — possible and impossible” during his 2012 visit to campus.

In an October 2019 Clark magazine story celebrating the 50th anniversary of Goddard Library, Professor Kristina Wilson noted that brutalism was a reaction to what architects like Johansen viewed as the sterility of steel-and-glass skyscrapers favored by big corporations. “All of these gleaming skyscrapers were unwelcoming to the messiness of human life,” she said. “Brutalism was an attempt to return to authenticity. The messiness of concrete and the authenticity of bricks were the materials that interested these architects.”

The Goddard Library was a sensation when it opened, even earning mention in a 1970 TIME magazine story that cited examples of striking campus architecture. Roderick said architects still visit the Clark campus to study the building’s unique design.

11 things you should know about the spring semester