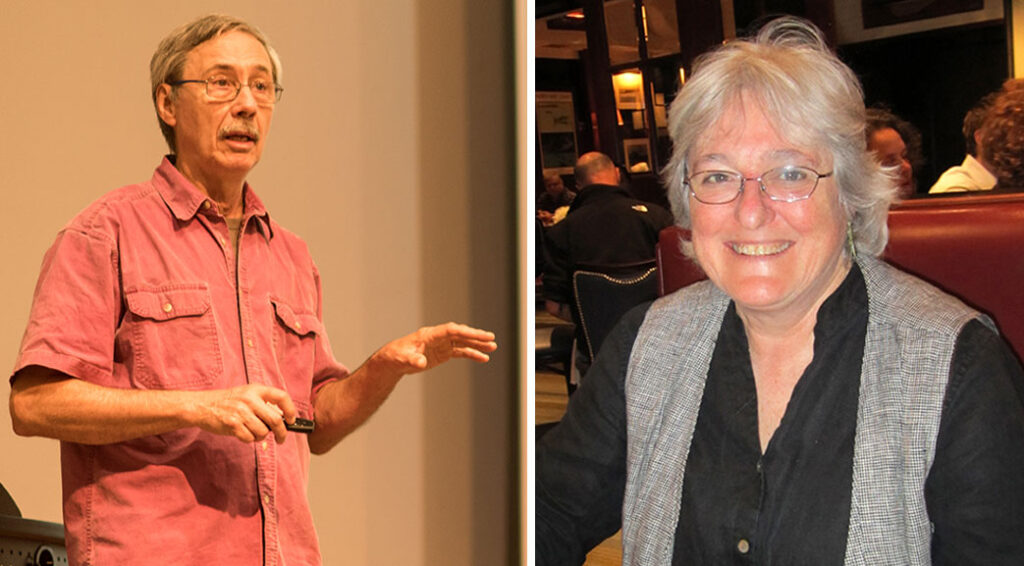 The event was virtual, but the respect, admiration, and love expressed at a March 27 tribute to biology professors John Baker and Susan Foster was as moving and personal as if the participants were gathered elbow to elbow in a living room.

Colleagues and former and current students of the recently retired Baker and his wife, Foster, who passed away on January 17, shared memories that honored the scholars’ 26 years of teaching, research, and mentorship at Clark. In his introductory remarks, Professor Justin Thackeray, chair of the Biology Department, also announced the formation of the Foster-Baker Fund for Biology Research, which will provide support for undergraduate research in biology, particularly for students from populations underrepresented in STEM fields.

Provost Davis Baird, who was unable to attend but whose remarks were read by President David Fithian, noted that the idea of Clark without Foster and Baker is unfathomable. “Clark will have a large gap to fill,” he said. “They were loud and proud about their dedication to Clark and Clark students.”

Fithian expressed regret at not being able to spend time with Foster and Baker on campus due to the pandemic, but said he had come to know them “exclusively by reputation — and what a remarkable reputation it is.” Baker — who was in attendance at the virtual celebration  — and Foster are held in high esteem by their colleagues, he said, and current and former students have shared with him their deep respect and affection for the couple.

Former President David Angel said that when Foster and Baker came to Clark, “We had a lot of work to do” in the sciences. “There was something missing,” he added. “Susan and John brought faculty and students together.” They created a “sense of place” that contributed to a surge in scholarship, student engagement, and involvement in research at Clark, he said.

“Distinguished scientists, successful grant-getters, publishers, editors, both deeply committed to students — through their leadership and example, they took Clark to another level in bringing the student experience to the forefront in a research university,” Angel said. “We found our mojo in the sciences through the joy, passion, and commitment that Susan and John inspired in all of us.”

Todd Livdahl, senior research scientist in biology, said bringing Foster to Clark from the University of Arkansas was one of his major career accomplishments.

“She and John established a highly productive research lab that showed the promise of evolution, ecology, and behavior as a legitimate focus for a strong program,” Livdahl recalled. “The drawback of this productivity, of course, was that the standards were raised and many of us could never quite measure up. We were all better for trying, though.”

For many Clark students, studying the evolution of the threespine stickleback fish in the Foster-Baker Lab was their introduction to college-level research. The couple’s former students and mentees shared how much the professors’ unflinching support meant to them, both at Clark and beyond. “I am where I am today because of Susan,” said Jignasha Rana ’07, M.A. ’08. “They were more than my mentors — their lab was my home away from home.”

William Cresko, Ph.D. ’00, and Christin Hulslander, Ph.D. ’03, who provided the seed money for the Foster-Baker Fund, thanked Baker for his and Foster’s mentorship but also for showing that married scientists can have jobs in the same academic department and “not kill each other.” (Cresko and Hulslander, who are married, are members of the biology faculty at the University of Oregon.)

Through their mentorship and example, Foster and Baker taught their students to be accurate and observant, to learn from nature, and to be open and accepting of diverse people and ideas, Cresko said. He recalled that they also stressed balance in life. “Don’t take yourself too seriously,” they advised, and work hard to keep from becoming a “pompous” academic.

Many former students shared memories of their fieldwork experiences with Foster and Baker in Alaska and Newfoundland, and expressed gratitude for getting to know their professors away from the lab. Trips to the couple’s Petersham, Massachusetts, home were common, as were stints as dinner guests (and chef’s assistants), housesitters, or gardeners.

Danielle Swenton, who spent two years as a postdoctoral fellow in the Foster-Baker Lab, lauded Foster as “an icon in the field,” one who could simultaneously intimidate, support, comfort, and guide her students with straight talk and passion. Baker, who was always positive and supportive, also provided “comic relief” in the lab. “You never let us be anything but our best selves,” Swenton told Baker.

In closing remarks, Professor David Hibbett reiterated how vital the lab community created by Foster and Baker has been to the Biology Department, and thanked Baker for his generosity as a colleague.

Students undertaking independent research in biology under the mentorship of a Clark faculty member or working with a faculty member on their research agenda may request support from the Foster-Baker Fund for any expense related to field or laboratory research — including supplies, equipment, and travel expenses. For more information about the Fund, contact Jonathan Kappel.